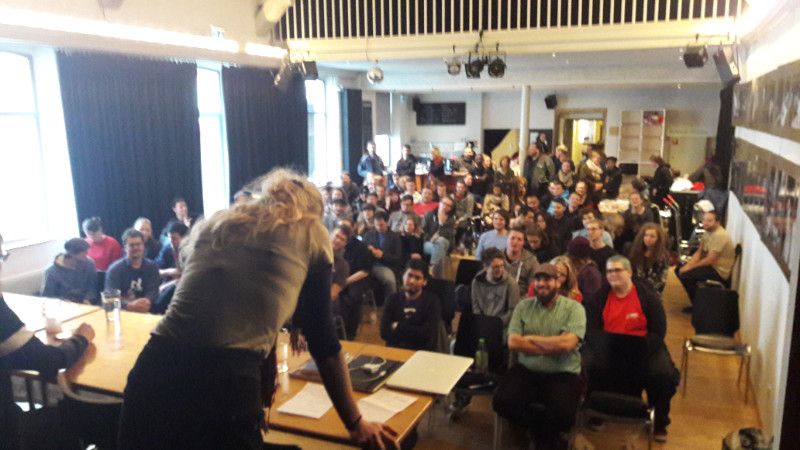 On 8 and 9 October, the Swiss Marxists of der Funke/l’étincelle, have organised yet another successful Autumn school. Over 130 young leftists gathered to learn about the ideas of scientific socialism. Among them were experienced Marxists, but also many young radicals who have only recently begun looking for a revolutionary alternative to this rotten bourgeois society.

The Autumn school is an annual weekend in Biel of intense study and revolutionary enthusiasm organised by the Swiss section of the IMT, der Funke/l’étincelle. This year’s event was fully bilingual german/French, and for the first time there we also had the presence of a comrade from Ticino, the Italian speaking part of Switzerland. 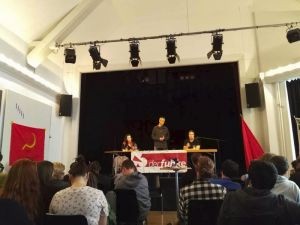 The event took place in an old restaurant which was run by a communist, until it had to close down due to the boycott of the conservative middle class villagers. You could not tell from the food though, which never failed to delight. The school opened with a plenary session, led off by Jorge Martin, discussing the world situation and the global development of the class struggle. Furthermore there were 12 smaller workshops which the participants could attend.

Traditionally there have been a wide array of topics and workshops dealing with classic questions of the labor movement. This year there were discussions on subjects such as the class struggle in France, the release of Trotsky’s re-edited magnum opus Stalin, the question of women’s emancipation as well as an introduction to dialectical materialism and the philosophy of Marxism. Particularly interesting was the workshop on Marx’s theory of capitalist crises, where it was possible to discuss the nuances of Marx’s economic theory and how the economic crisis is reflected in a political crisis. The discussion on the contradictions between the tendency of the rate of profit to fall and the increase of the relative surplus value through investment in the means of production displayed the extraordinary theoretical level of our tendency. 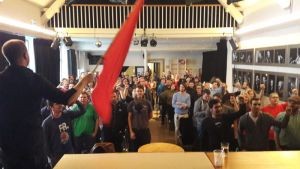 There was a lively dynamic of young and inexperienced comrades actively participating and testing out their ideas, more experienced comrades intervening with well prepared and enlightening speeches, younger comrades asking for more details and other comrades trying to answer these questions. Through the participation of all comrades, all participants were able to learn and raise their political level. The mood was that of radical enthusiasm, but also of revolutionary seriousness and discipline. Thus the exuberant of Saturday party was followed by a disciplined meeting the next day. The evening program also included a screening of Ken Loach’s Land and Freedom, a concert of songs from the Spanish Civil War and endless discussions on politics, history and Marxist theory. After an intense Sunday of workshops, the school was then concluded by a proud rendition of the international. 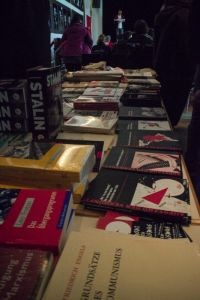 After that we bid the over 130 participants goodbye - a number particularly outstanding when you consider the small size of Switzerland. The participants came from all over the multilingual country, and some arrived from neighboring countries, such as France, Austria and Italy, too. It is to our Italian comrades that we owe the presence of the Ticinesi (i.e. the Italian speaking part of Switzerland) comrade. Although none of us speak fluent Italian we are very proud of this achievement and hope to set a more stable foot in this third linguistic part of Switzerland. 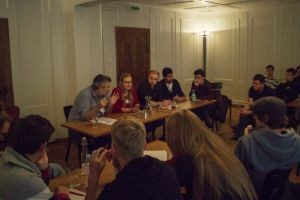 The school was a resounding success built on revolutionary enthusiasm the strength of the ideas of Marxism. It proves once again that, contrary to the popular image of Switzerland as a purely conservative country, there exists in fact a layer of radicalized young workers and apprentices seeking a radical alternative to the decay of capitalism. Der Funke is successfully gaining an echo in this layer. This was proven by the success of the school, which is the fruit of our yearlong labor. The only thing that keeps the IMT from growing even stronger is not the passivity of youth (as dishonest liberals like to explain), but the still relatively small number of comrades participating in this struggle – and you, dear reader, have the power to change that.

Spread the revolutionary ideas of Marxism!