This year sees the centenary of one of the major strikes in New Zealand. It lives on in the memory of the Labour movement along with the years 1890 (Maritime), 1906 (tram workers), 1908 (Blackball miners) and 1912 (Waihi miners).  Already planned are commemorative walks to the most important sites of the dispute in Wellington along with a re-enactment of clashes between workers and “Masseys Cossacks”. Socialist Appeal highlights the important events and the lessons of 1913 that was described as the year that revolution came to New Zealand! 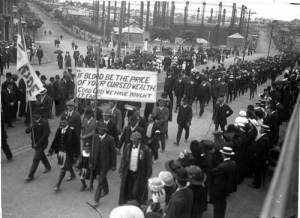 In the decade before the First World War, workers throughout the world were taking action trying to improve their pay and conditions.  As an example, for two years, in Britain, there were many bitter strikes where the army was used. In Ireland workers faced the Dublin Lockout of 1913.

Syndicalism was the main idea behind these disputes. This is a belief that strikes alone would be able to bring down the capitalist system. Most of these ideas came from America where the International Workers of the World (IWW or “wobblies”) bravely fought the bosses and from France. Many of the leaders of the New Zealand Labour movement had worked for the IWW and had been influenced by their ideas.

Syndicalism rejected political parties and fought for unity amongst the industrial workers, especially in the workplace, for the formation of “One Big Union”. The ultimate weapon in syndicalism’s arsenal is the General Strike. However this does not recognise the role of the state (the police, army, prisons and the judicial system) and its likely response when challenged. That is why many of the bloody reprisals, mentioned above, took place. The wobblies split because of disagreements over political activity.

The strikes in 1913 were a continuation of actions of the previous year. Whilst the Waihi strike of 1912 is remembered because of the death of miner Frederick Evans and the defeat of the strike, the victory of the gold miners at Reefton in a dispute that lasted from May to November 1912, over manning levels, is often overlooked. It took them six months but they went back to work with pre-dispute numbers, a non-victimisation agreement and reinstatement of all strikers.

Since 1895 Industrial Relations in New Zealand had been governed by the Industrial Conciliation and Arbitration Act (IC & A Act 1894). Under the Act workers and bosses were encouraged to meet to discuss pay and conditions and to take any disagreements to an arbitration board and finally to the arbitration court where a binding award on pay and conditions would be made by an “independent” judge. They were not allowed to strike whilst the award was operative or under discussion.

In January 1913 there was a widely representative conference of trade unionists and socialists to try to achieve unity industrially and politically. Two new organisations were proposed; a Social Democratic Party and a United Federation of Labour (UFL). A second conference in July confirmed the decision although a small group supporting the IC &A Act refused and continued with the misnamed United Labour Party.

At different times, depending on economic conditions, the Arbitration Court made awards in favour of the workers or the bosses. In the early years this process appeared to work leading some people to state that New Zealand was a land of no strikes (no strikes of significance for 12 years although disputes did take place). Unions could deregister from the act and operate under the 1878 Trade union Act.

As economic conditions declined the awards did not maintain the living standards of the workers signed up to the Act. Some like the domestic workers were excluded or did not register. The discontent resulted in major strikes from about 1906. They would have continued after 1913 had the First World War not intervened.

1913 started with a demand from shipwrights in Wellington for the United Steamship Company to pay them for travelling time to a new workshop. Having got nowhere negotiating under the IC & A Act from March to May the shipwrights deregistered and joined the Wellington Waterside Workers’ Union (WWWU) which was part of the UFL. Further negotiations were held by the WWWU only to see the employers reject the claim on 17 October 1913 causing the WWWU to declare a strike the following day.

The WWWU called a stop work meeting for 22 October to consider the claim. The employers, who had been preparing for the strike and delaying any decision until they were ready, immediately replaced the men at the stop work meeting with scabs. Against the wishes of the Union leadership another meeting was held and 1500 decided to strike until the victimised men had been reinstated. At the same time 560 miners in Huntly were on strike demanding reinstatement of 16 sacked coal miners.

The disputes were put in the hands of the UFL (the federation of New Zealand Trades Unions similar to today’s Confederation of Trades Unions (CTU)). They were known as the “Red Feds” not necessarily for their militant activity but for the fact that one of their leaflets was printed on red paper and noticed by the hostile press!

The strikes proper began on October 23. There were clashes between strikers and the scabs. Even as the action continued there were negotiations with the employers who tried to settle the dispute by asking the men to go back on the conditions that provoked the men in the first place

The bosses offered nothing different but because the WWWU was not registered under the IC & A Act they should agree to pay a £1000 bond to keep to any agreement proposed by a government appointed judge. Whilst the UFL agreed the WWWU still refused to accept the new conditions. The Auckland Watersiders came out in sympathy – the strike was spreading!

The role of the State

Meanwhile the Government under William Massey was also preparing for an escalation of the dispute by recruiting thousands of special police officers from the countryside, mainly small farmers. They were both mounted and on foot. The mounted specials were soon dubbed “Massey’s Cossacks” after the Russian soldiers that had attacked demonstrating workers in Petrograd in 1905. “Massey’s Cossacks had also been seen during the Waihi Strike the previous year. They had come into the Cities to “teach the workers a lesson.”

Anyone who had any illusions in the neutral and benign role of the state would soon have them shattered as once again it intervened on the side of the bosses to defeat an industrial dispute. The army acted reluctantly on the orders of the government unlike the police who actively and enthusiastically intervened. The state was used to ban strikes and stop solidarity action, even to help the women and children of the strikers – many of the Bills going through parliament, at the end of 1913, were used to legislate against the strikers. What started as a local dispute in Wellington became a major dispute that affected the whole country.

On the 8th November the “Cossacks” moved onto the Auckland waterfront. The workers’ leaders responded by calling a General Strike in the city. By midday 4500 workers from 14 different unions had answered the call. Brewery workers, bricklayers, carpenters, drivers, furniture workers, hotel workers, labourers, painters, timber workers and seamen were on strike, closing the hotels and stopping trams. The city was at a standstill. The number of strikers had grown to 10000 by the 10th.

In Wellington the bosses rejected peace offers from the WWWU. The UFL then called a General Strike in the capital along with Christchurch and Dunedin, but here the call was met with a less enthusiastic response; in fact some of the Union leaders and the ULP leadership actively opposed the call.

As the strike progressed prominent leaders such as Harry Holland, future Prime Minister Peter Fraser were arrested. UFL Secretary Tom Young and IWW organiser Tom Barker were arrested on the grounds of sedition!

The Strikers are defeated

By the 13th November it appeared that the strikers were weakening although there were signs that the action was having an effect. Shopkeepers in Auckland complained that their businesses were paralysed and wanted the main employers’ organisation to be more flexible and find a reasonable settlement. However the scab unions that had been set up by the employers were starting to get things moving again. The strike was costing £4000 a day just to pay for the 3000 special constables.

However on the 16th November 7500 marched to Victoria Park in Auckland to join 4500 already there for a rally in support. But as the employers were using their money to finance scab unions and the specials the balance moved in their favour.

On 20th December the UFL called off the strike and on 22nd the Watersiders marched back to work with banners flying. The miners, as so often, stayed out until 14 January 2014.

Lessons to be learnt

The 2 month dispute directly involved over 13,000 unionists out of about 72,000 who were organised although there was a lot of support from non-strikers and women’s organisations. The strike revealed the naked role of the state in supporting the capitalist system and the employers. 1913 was the nearest New Zealand had come to a revolution to overthrow capitalism. The state's role in protecting capital was laid bare with workers' facing the state's full brutal force.

Once the strike was over there were many lessons to be learnt. The newly formed Social Democratic Party made some gains in elections and there was a move to unite to form a political party capable of gaining a majority in parliament to implement policies in favour of the working class. The New Zealand Labour Party was formed in 1916, as a consequence of 1913, with nationalisation being a key demand.

The last lesson to note is one of leadership. The syndicalist leaders of the 1913 dispute imagined that such a display of force during the strike would result, in itself, in the collapse of capitalism. This was the classic syndicalist view of the IWW . This was a profound mistake. While the general strike can be an important weapon, it serves to raise the question of power, but does not resolve it. In such cases, the solution lies in the conquest of political power by a party of the working class, based upon the movement of the masses themselves.

However the 1913 Great Strike demonstrated in practise the need not only for militant trade unions, but also a revolutionary leadership and party that would carry the struggle through to a successful conclusion.

It would take the mighty events of the October Russian Revolution 1917 to point the way forward.