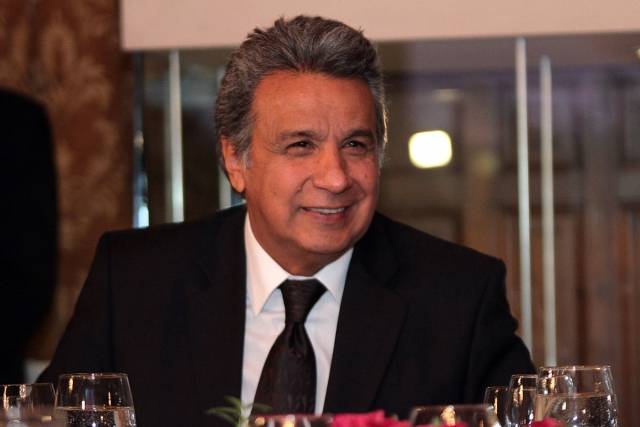 Elections in Ecuador on February 19 were seen as a test both for Rafael Correa’s “Citizen’s Revolution” and for the general trend of the right wing winning elections and coming to power in several Latin American countries. Here are some initial comments from José Pereira from Lucha de Clases Bolivia. At the time of writing it was not clear whether a second round would be triggered, which is now the case.

Lenin Moreno, the successor appointed by Ecuadorean president Rafael Correa, has won a clear majority in the presidential election over the second most voted candidate, the banker Guillermo Lasso. It is not yet clear however, whether this victory will be enough to prevent a second round in which all the other opposition parties have already announced their support for Lasso.

Lasso has stated that there definitely will be a second round. Other opposition leaders have offered him their support. There is a possibility however, that this is not just the usual tactic of crying fraud or put pressure on a government which in the best of cases will come into office weakened and without an overall majority in Parliament.

Since the national abstention rate has been around 20% and spoilt and void ballots have amounted to 9% (an increase since 2013), it all comes down to one million votes. If one includes the votes of the Ecuadorians abroad, the votes in cities like Guayaquil and in those provinces and rural areas where Rafael Correa has so far won by a small margin or even lost, in his 2013 victory, Moreno should be able to get at least another 400,000 votes.

These elections are significant beyond the borders of Ecuador. Latin America has been waiting to see if they would reaffirm that a change has taken place in the general political direction of the region. This change which has been exemplified by the victory of the opposition MUD in the Venezuelan national assembly elections of December 2015, that of Macri in Argentina, Kuczynski and the return of fujimorismo in Perú and with the successful removal of Dilma in Brazil. Whether there is or not a second round in the Ecuadorian elections, they already tell us a lot in this regard.

In comparison with Correa’s 2013 victory, Lenin Moreno has lost nearly 1.5 million votes, while the electorate has grown by 1.1 million. This result, is similar that of Correa in 2009, when there were 2.8 million fewer voters. This means that the hard core of the “Citizen’s Revolution” is more or less intact. The loss of votes therefore cannot be attributed to the change in leadership.

Unlike Evo Morales in Bolivia, who was defeated in the attempt, Correa did not seek constitutional reform to allow him to stand for another term in office, in order to prevent a polarisation of the country at a time when the economy was already slowing down. The last years of Correa’s mandate witnessed a marked deceleration of the economy, worsened by the dollarisation of the economy, which makes it more difficult for the government to intervene and increase public expenditure. The World Bank document of analysis on Ecuador sums up the situation clearly and is worth quoting at length:

“Between 2006 and 2014, GDP growth averaged 4.3%, driven by high oil prices and substantial external financing. This stimulus enabled increased social spending and important investments, especially in the energy and transportation sectors, as well as in education. According to official country information, poverty declined from 37.6% to 22.5% during that period. The Gini Index decreased from 0.54 to 0.47, given that growth benefitted the poorest population more than other segments.

“Nevertheless, these achievements are threatened by deceleration and, more recently, by the economic slowdown the country has experienced in response to declining oil prices since 2014 and the stronger U.S. dollar. Poverty even rose slightly, from 22.5% in 2014 to 23.3% in 2015, which reflected an increase in rural poverty, from 35.3% to 39.3%...

“Given Ecuador’s lack of a local currency and the limited fiscal and external cushions, the country has been unable to apply macroeconomic policy to address the complex economic situation. Consequently, the new global context has led to a significant decline in domestic demand, especially public demand. The government has been forced to sharply reduce public investment and curb spending – a measure that has eased in recent months thanks to significant mobilization of external financing.” (Ecuador Overview)

Lenin Moreno’s result is clearly lower than those of Correa. In case there is a second round in the elections, these might result in the return of the neo-liberal right to power in Ecuador. This is due to these changes in the world situation. To put it a clearer way, it is due to the incapacity of the “citizen’s revolution” to face up to this challenging situation with a sharp shift to the left, mobilising the working class and the poor people against the constraints imposed by the dollarisation of the economy and capitalism itself.

The joint votes for Lasso and Viteri (the candidate of the Social Christian Party which in the previous election supported Lasso) are three times what they obtained in 2013 when they were in an alliance. Lasso’s program is one of classic liberalism: cuts in social spending, the promise of a million new jobs (without social protection) and the abolition of Correa’s tax laws, particularly those on inheritance and capital gains which Correa introduced. These laws provoked the wrath of a middle class who were fearful of increased taxation, but also disappointed the working people who did not see any benefit in them.

As the laws of the market have not been not challenged in any serious way in Ecuador, they eventually impose themselves through the policies of the liberal right. While the favourable winds of the world economic situation were blowing strongly it was relatively easier to implement reformist policies of redistribution of wealth. The turn in the political trend in Latin America is the result of the change in the objective conditions - which the so-called progressive governments were unable to face up, other than by seeking agreements and conciliation with the ruling class, such as in Bolivia and Venezuela; the impeachment parties in Brazil and the international financial institutions in the case of Ecuador. This then had the effect of de-mobilising the masses, the effects of which are plain to see in the electoral field.

If there is a second round in Ecuadorian presidential elections, we would vote against Guillermo Lasso and his program (one of a brutal social massacre), but at the same time, faced with the inability of the Citizen’s Revolution to overcome its own limitations, we would stress the need to build an alternative leadership and develop a revolutionary program.