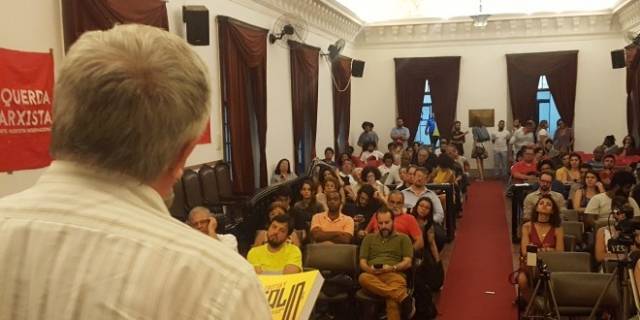 Alan Woods’ speaking tour of Latin America came to an end with a successful meeting in Rio de Janeiro on October 10. On a Monday evening more than 100 people gathered in the Hall of the Institute of Philosophy and Social Sciences of the UFRJ (Federal University of Rio de Janeiro), in the Centre of Rio de Janeiro, to celebrate the centenary of the Russian Revolution and to study and discuss its relevance with the launch of Leon Trotsky’s book "Stalin".

The meeting saw the participation of young activists and left militants of Rio de Janeiro from different political tendencies who were interested in the subject. Activists from the interior of the state of Rio de Janeiro travelled to the capital Rio to take part in the event. Young comrades of the Esquerda Marxista (the Marxist Left, the Brazilian section of the IMT) came from São Paulo to help in the logistics of the book sales. Present in the meeting were also the Coletivo Juntos [the youth of the MES, a tendency within the PSOL] and the Pré-vestibular Emancipa network of People’s High Schools. The event was also broadcast live on Facebook. 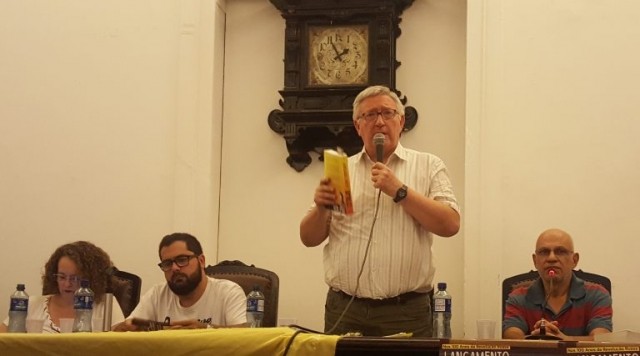 After a brief introduction by Pedro Fuentes (MES leader), Comrade Danilo Serafim, a leader of SEPE (Rio State Teachers' Union) and member of the Marxist Collective Paulo Romão, spoke about Trotsky's entire life struggle as "the prophet who predicted and armed the October Revolution" at decisive moments in the 1920s. He commented on the importance of the book as absolutely necessary if one wants to know the real historical truth that the bourgeoisie insists so much on falsifying, as we saw in a recent article in O Globo yet again slandering Trotsky.

Luciana Genro (MES leader) presented the Russian Revolution as the event that opened a whole historical period of workers' revolutions and congratulated the International Marxist Tendency for this initiative and particularly comrade Alan Woods for launching this important book as an example of the kind of initiative that revolutionaries must take up worldwide.

Then Luiz Bicalho spoke on behalf of the Esquerda Marxista and Editora Marxista. Comrade Bicalho explained the importance of studying economics, politics, philosophy and science, as the great revolutionaries of the past did, such as Lenin who helped an entire generation to become communist and Marxist and build a party to take power. He emphasized the importance of working among the youth so that they could learn how to intervene, to lead but also to learn from the workers. This was a merit of the party of Lenin that carried out great work in the universities while at the same time connecting it to the work in the factories.

Bicalho questioned other events being held in this period to commemorate the Russian Revolution, but which reproduce many myths such as that the Stalinist bureaucratic degeneration of the USSR was the fruit of Stalin's personality rather than a historical process in which Stalinism represented the counterrevolution which destroyed the party and the Third International. He then presented Alan Woods, a leader of the International Marxist Tendency who, together with Rob Sewell, worked in retrieving the original manuscripts and preparing the book, correcting and adding to earlier versions distorted by the publisher Malamuth.

Alan Woods began by saying that it was a great pleasure to be at the launch of the Portuguese translation of this great work. He explained how the book was recovered from boxes that were buried in dusty archives at Harvard University. He summarized the book, explaining that Stalin was a perverse, vindictive individual, but that these personal characteristics cannot explain how he came to power, nor do they explain the causes of the bureaucratic degeneration of the Russian Revolution. 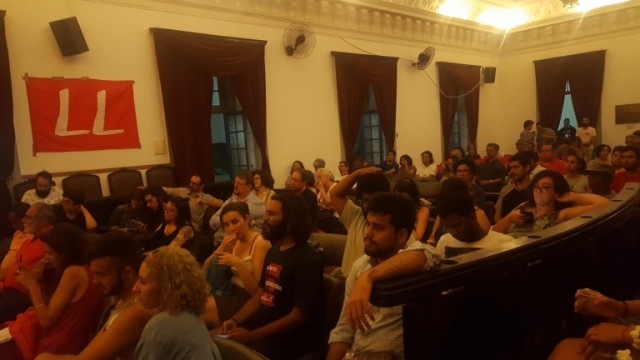 Alan explained that the triumph of the bureaucratic counterrevolution can only be understood if one takes into account the isolation of the Russian revolution in a very backward country. This degeneration would have taken place with or without Stalin. However, the particularly violent, sadistic and bloody character of the Stalinist regime does indeed reflect the particular characteristics of Stalin's personality.

Alan Woods presented the Russian Revolution as the most significant episode in the history of humanity, the most popular and democratic revolution ever to have taken place. That explains why it receives so many attacks from the bourgeoisie to this day.

"This book is the last word of the man who, together with Lenin, led the October Revolution and firmly defended the ideas of Marxism with all the consequences that this entailed, right up to August 1940 when Stalin succeeded in silencing him with a cowardly and brutal blow to his brain." The most moving and most applauded moment of Alan's speech was when he explained that Stalin never understood that although it is easy to kill human beings, "you cannot kill an idea whose time has come… This book is a weapon in the hands of today's fighters. Seventy years after Stalin thought he had destroyed the opposition, here we are." (Much applause).

At the end of the meeting some questions were asked and, very much enthused by the discussion, the participants continued to debate among themselves while forming a queue to get Alan Woods to sign their copies of the book. Dozens of books were sold and many people paid in advance for the second volume that will be released later this year.