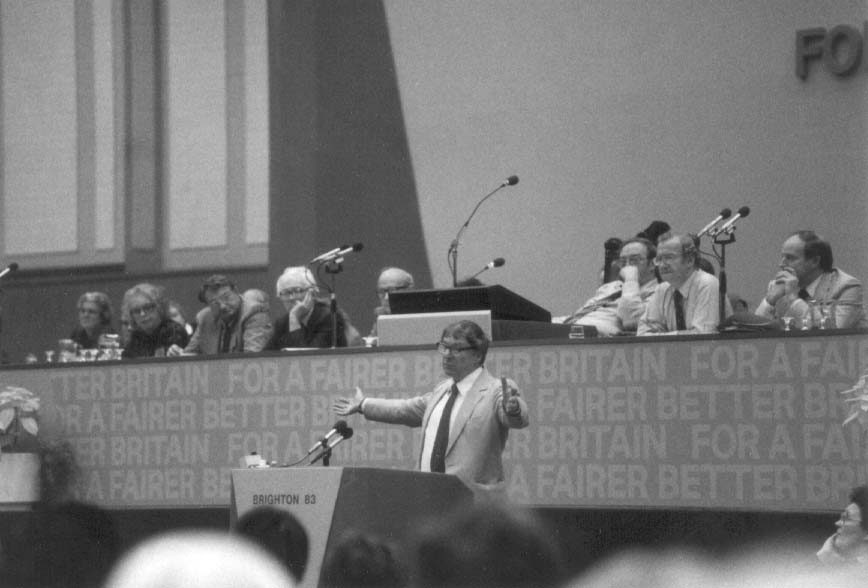 [This] is the speech made by Ted Grant at Labour Party annual conference in 1983, appealing against his expulsion by the National Executive Committee in February of the same year. The NEC had begun an 'enquiry' into the newspaper Militant, on the urging of the capitalist press and Tory ministers, who goaded Michael Foot, the Labour leader, with having 'extremists' in his party.

The NEC eventually decided to expel the five members of the Militant editorial board the day before a parliamentary by-election in Bermondsey, in South London. As a result of the preoccupation of the Party leadership with attacks on its own left-wing, and the campaign of the media to highlight the divisions in the Party, Labour lost what up to then had been a safe seat. This was an anticipation of the equally disastrous general election result later in the year.

All Five members of the editorial board, Ted Grant, Peter Taaffe, Lynn Walsh, Keith Dickinson and Clare Doyle, were given leave to appeal to the annual Party conference in October. When their appeal speeches were made, contrary to normal practice, the press and TV were excluded. As the transcript shows, there was considerable sympathy among the delegates, easily a majority, against the expulsion. But the big block union votes, controlled by a handful of trade union officials, carried the day for the right wing.

As the Militant argued at the time, the expulsion of the five became the prelude for a wide ranging witch-hunt in the Party and a large-scale shift of policies towards the right. Increasingly, the apparatus of officials has become tied down in keeping dossiers, organising enquiries, closing down Party branches and constituencies and expelling Marxists. Party rules have been modified several times, and even then, bent somewhat, to engineer expulsions.

But it is equally true, as Ted Grant said in his contribution, that those expelled will be back. Whatever may be the subjective wishes of this or that MP, union leader or Party official, there is no power on earth that can stop the growth of Marxist ideas inside the Labour Party.

In the development of a mass Marxist current, embracing thousands and hundreds of thousands of workers, an invaluable role will be played by discussion, education and the study of theory. The best and most class conscious activists must be armed with an understanding of the richness, the breadth and the development of socialist thought. This publication will play a central part in that because it is due to the work of Ted Grant, more than anyone else in the post-war period, that Marxist theory has been defended at the same time as being significantly deepened and extended.

– From Introduction to The Method of Marxism

Comrade chair, comrades, this is a sorry day for the Labour Party, that we should be discussing expulsions instead of discussing - as we have been doing and will continue to do in conference - the fundamental way in which we can get rid of the Tories. (Applause)

Our crime is allegedly that we are organised. Solidarity(1) is organised. This movement has now reached a situation where MPs no longer have a divine right to their seats. They are now accountable to re-selection. (Applause) No longer do they have the divine right to elect the leader; the leader is now elected by the whole of the party conference, and that is absolutely correct. But apparently one divine right remains, that is the right of the right wing to be organised. But there is no such right for those who can effectively fight against the right wing.

If we look at our history, we see that it was the traitors of the SDP(2) - Rodgers, Owen, Williams - who first raised the question of a witch-hunt in the Labour Party. In fact one of the reasons they gave for leaving the Labour Party was that Militant was not expelled from the party. There was an enormous campaign from our enemies, in the press, in the media, by the Tories, Thatcher, Tebbit, Howe and all the rest, demanding that Militant should be expelled so that Labour could set its house in order.

Were they grateful when the expulsions took place? On the contrary, they used this to show the disunity in the Labour Party. Is it not an absolute disgrace that four or five NEC meetings before the general election were taken up with discussions about Militant, instead of with preparing a campaign that would be victorious against the Tories? (Applause)

We have it on the word of Jim Mortimer(3) himself last November that a large majority of constituency Labour parties were not sympathetic to the exclusion of Militant. To those I would add the overwhelming majority of the rank and file of the trade unions. They want unity; they do not want to spend years discussing this question.

We warned the NEC before the Bermondsey by-election that it would be absolute madness to expel us just on the eve of a by-election. We asked that the hearing should be postponed for a week, a month or as long as they liked. The right wing said that if these expulsions took place that would help to gain a victory. We saw the result in Bermondsey. We have seen the result in the general election, the result of witch-hunting.

Whatever the result of this vote, whether we gain a victory or whether we are expelled, we shall still continue to work for a Labour victory.

We shall still continue to work to make certain that this Tory government is thrown out, and preferably a Labour government with socialist policies returned. Whatever programme is put forward, Militant, as it has always done in the past, will continue to work for the victory of this movement. There is no way that Marxism can be separated from the Labour Party. There is no way you will succeed with these expulsions. We will be back. We will be restored, if not in one year, in two or three years. We will be back.

At every trade union conference, at every ward, at every GMC, at every shop stewards' committee meeting this question will come up and we will be back. (Applause)

Go back to contents page

(1) An organisation with its own members, funds and full time organisers, set up by a section of the right wing in the Labour Party.

(2) The Social Democratic Party was formed in 1981 as a result of a split led by the three named labour MPs and Roy Jenkins. All were former Labour Cabinet members.

(3) Jim Mortimer was then General Secretary of the Labour Party. He was himself expelled in the 1930s for supporting CP front organisations.