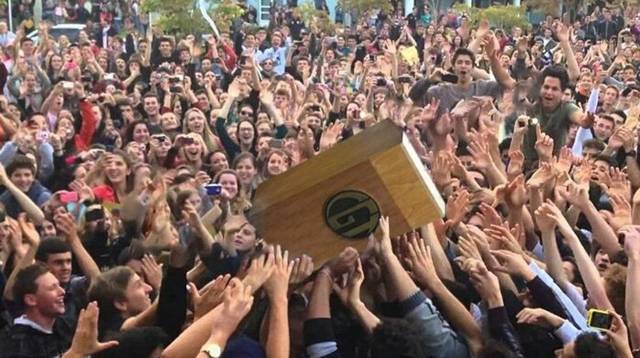 On April 28 we saw a massive general strike in Brazil, the first in over twenty years, which we reported on, but before this, in Argentina there were dramatic events during a mass trade union rally where the union leaders were booed and shouted down and had to escape the wrath of the workers, escorted by security guards - “unprecedented” for a trade union rally in Argentina. The reason for the anger was the refusal of the leaders to fix the date for a general strike. In both Brazil and Argentina the working class is on the move. Here we provide a report from our comrades in Argentina.

The crisis of world capitalism continues to get ever deeper and its impact can be seen everywhere: from Trump’s bombing of Syria and Afghanistan, the military tensions in Korea, the activation of Article 50 of the Lisbon Treaty which triggers Brexit, to the Mélenchon phenomenon in France.

In Latin America this has been expressed in the political crises in Paraguay and Venezuela, and in Argentina it has found an expression in the massive worker mobilisations from late February to April.

Argentine capitalism - a weak and backward capitalism, firmly welded to the world market - has been hit hard by the crisis of global overproduction, with a drop in exports, an increase in unemployment, an increase in the fiscal deficit, a fall in consumption and a decline in industrial production.

The Argentine bourgeoisie has therefore been forced to attempt to reconfigure the state according to its own needs. The present Macri government represents that openly reactionary wing of the bourgeois that ruled the country back in the 1990s and that worked with the military dictatorship of 1976 in dismantling the productive apparatus.

Workers on the streets

The response to the capitalist offensive against the living conditions of the working class has been expressed in a series of mass mobilisations in the last period. One would have to go back to the times of the Argentinazo in 2001 to see such a level of mobilisation.

Thus we saw the mobilisation of teachers on March 6th with thousands of workers on the streets, the 400,000 workers who flooded the streets of Buenos Aires on March 7th, responding to a call issued by the main trade union confederation and then the women's strike that on 8 March saw 300,000 people gather in Plaza de Mayo.

However, it did not end there. A couple of weeks later, on the 22nd 400,000 teachers across the country marched against cuts in public education. The largest mobilisation was on March 24th on the anniversary of the 1976 military coup when a million people filled the streets of Buenos Aires. Also during March we saw several mobilisations and street blockades of piqueteros and other social organizations. The high point, however, was on April 6th when a general mobilisation saw a 90% participation, paralysing the whole country.

The fact is that the union bureaucracy had tried to resist the pressure from below for such an all-out mobilisation. This was confirmed on the day, with the anger of the workers reaching unprecedented levels. On 7 March in a union mobilization, the leaders of the CGT had to flee before the wrath of the workers who were shouting out loud, demanding a general strike that the bureaucracy refused to call.

[Video: Trade union leaders as they leave escorted by security guards as the mass of workers demand the fix a date for the general strike. Among other, you can hear workers shouting "traitors", "sons of a bitch", "workers' unity", "general strike".]

When it became clear that the union leaders were not going to fix a date for the general strike, the workers jumped onto the platform, grabbed the historical lectern from which Perón once spoke, throwing it to the ground, and interrupted the act demanding a general strike.

The union leaders had to be quickly escorted from the platform by security, as they were insulted by the workers, with punches and bottles flying, to the point that some of them had to hide in nearby buildings. One of the leaders was pulled out of the car in which he was escaping and beaten for several blocks with the workers shouting "Call the general strike", "Fix the date". 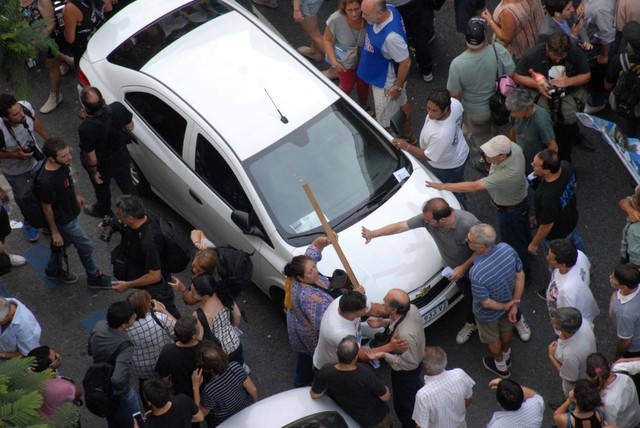 Workers surround car taking one of the TU leaders away

Faced with such pressure the bureaucracy was forced days later to call the strike on April 6.

Days before the strike Carlos Acuña, leader of the CGT declared: "The national strike is not against anyone, it is just an outlet [meaning a letting off of steam]." This makes it clear that it is the trade union bureaucracy itself that is allowing the government to survive by holding back the workers and trying to limit mobilisations.

All this shows what immense pressure has built up from below; that the workers want to fight and to put a stop to the austerity measures being carried out by the Macri government.

What is being prepared is a possible open confrontation on the streets between the workers and poor against the Macrista government and imperialism.

[Pablo Moyano, one of CGT leaders, escaping from the demonstration. "Historically unprecedented" events, as the TV commentators describe the scene.]

There came the April 1st pro-government mobilisation composed of petty bourgeois layers of society, which according to the police saw the participation of 25,000 people. This emboldened the government, thanks to the media hugely exaggerating the size of what was in reality a small turnout. They reported it as a huge mobilization of fervent masses supporting the government.

In this environment, the government decided to unleash open repression.

Thus we saw the police, a few days later, with truncheons and shields clearing the Panamericana highway during the general strike of April 6th;  the teachers who tried to mount a tent protest in  Plaza del Congreso on the 7th were attacked with pepper spray; and on April 9th workers occupying the AGR-Clarín were dislodged by police armed with rifles and machine guns.

More recently the police illegally entered the Faculty of Agricultural Sciences in Jujuy and removed students from the Student Centre. And in the City of Buenos Aires the local authorities denounced the entrance of armed police into the Mariano Acosta school to threaten the students who were in solidarity with the struggle of their teachers for better wages.

On top of all this, the government has been buying more advanced equipment to deal with street protests, such as Tasers (electric shock guns) and "anti-picket armoured cars". All this indicates that the government is preparing to carry out the austerity demanded by the bosses with the stick rather than the carrot. The various political and social organizations that are on the streets need to begin discussing and developing self-defense measures to protect protesters.

The crisis of leadership

As we have seen, widespread discontent has manifested itself in the enormous readiness of the masses to come out and fight. But the movement is facing a crisis of leadership.

On the one hand, the Kirchnerist leaders [latter day Peronist] have bowed down before the institutions of bourgeois democracy, with the prospect of winning a few seats in parliament later this year in October, and moderating their stance in preparation for the presidential elections of 2019.

This tactic has produced paralysis in the grassroots organizations of Kirchnerism that have abandoned the fight in the streets and today are at a crossroads. Either they lower their anti-imperialist "homeland or vultures" flags and act as guarantors of Macri's austerity or they break with class collaboration and give battle in the streets with a class perspective. Events will ruthlessly put these organizations to the test.

On the other hand, the Left groups play an important role in organizing workers against layoffs and helping them to fight and highlighting the workers' disputes. But on the political front they maintain their position of self-proclaiming themselves as the party of the working class, giving no real meaning to genuine class independence.

We believe that these comrades should offer a united front to those layers of workers and youth who still have illusions in a political leadership that is alien to the mass movement and offer to fight with them for their immediate and historical interests, with the perspective of helping to establish a mass political force that will serve to fight against the bosses and the capitalists, that is to say a Workers' Party.

Things are moving fast in Argentina, and the class struggle is sharpening. Argentina has a past of militant and bold general strikes, which forged the consciousness of the working class. It is time to return to these traditions of struggle and and face the capitalists as the main enemies of the workers.