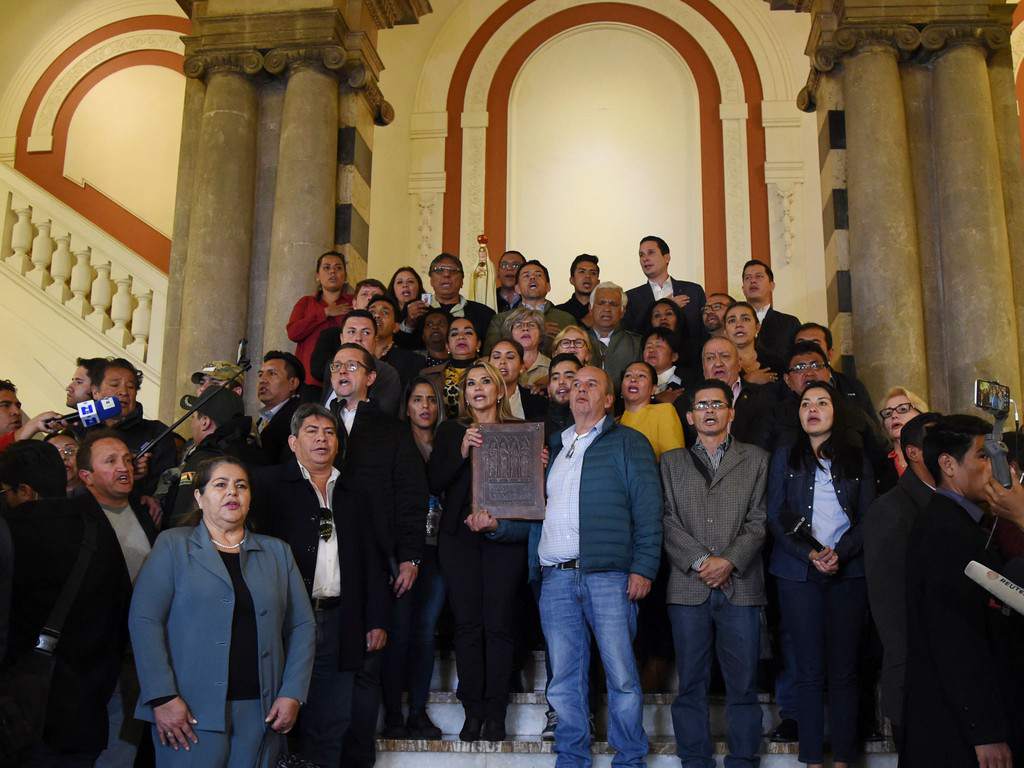 To workers, left-wingers and activists. The dramatic times we are living through reveal before everybody’s eyes that Añez’s presidency can only be imposed through bloodshed and the massive use of the armed forces. That is to say: through a putsch that will cut across any democratic smokescreens. The forces that are now being released against farmers, indigenous people and coca growers from the Movement for Socialism (Movimiento al Socialismo, MAS) in several areas around the country, and against the raising of the wiphalas in El Alto, will be used to militarise society against the working class in the future.

Originally published in Spanish on 13 November 2019 |

The forces of reaction, which are showing their counter-revolutionary ambitions in advance, ordered the wiphalas, the flag of indigenous struggle, to be lowered from public buildings. This has provoked an uprising in El Alto, a predominantly Aimara region, that goes far beyond MAS and Evo Morales. Their slogan, issued from many who reject any affiliation to MAS, is: “out with racist Añez from the palace”. If this indigenous uprising is not given a mass character and oriented towards the working class, a direct intervention of the military in politics and the establishment of a military government cannot be ruled out.

The MAS’ strategy to confront this is completely confused. Their parliamentary bench is moving through bourgeois institutionalism and appeals for peace and the restoration of bourgeois democracy. But it is precisely the bourgeois state, together with the armed forces, the police and the constitutional court, that have validated Añez’s assumption of the presidency. They are the perpetrators. This strategy is isolating the peasant struggle, which is being driven towards methods that alienate it from the majority of the urban working class.

The appeal to defend democracy, the same slogan the putschists are using, aids the latter’s cause. Añez is rushing to complete the “reconstruction of the institutions”. She has already appointed a new Military High Command and a new cabinet. Above all, with this line, it is impossible to call the working-class and poor masses to fight. This is due to the divisions that have arisen during this crisis and, moreover, because workers understand that a return of Evo to restore bourgeois democracy would mean a new uprising from the civil servants, and a repetition of what we have already seen.

The Miners’ Union of Huanuni has issued a statement rejecting confrontation between class brothers, declaring an emergency and placing itself clearly against the right wing. We understand and share the worries of our miner comrades, but on this point we want to be categorical: those being repressed in El Alto are our class brothers too. Refusing to act against this repression only serves the coup and prepares the ground for an attack against the whole of the working class.

We have received pronouncements from several rural districts' teachers’ federations calling to fight against the coup, linking this fight with sectoral demands. That is a correct line. But as we have said, it is only possible to fight the coup by fighting against the bourgeois state, through the appeal to the working class.

We must clearly explain that the coup is, above all, a bourgeois coup d’état, organised to satisfy the interests of large cattle-ranchers, capitalists, multinational corporations and imperialism. The civil, police and military façade is only an instrument. The appointment of Añez’s cabinet clearly demonstrates it: the economic assessor of the Governorate of Santa Cruz has been designated Minister of Economy, the lawyer of the Committee for Santa Cruz as Minister of Presidency, the misogynist businessman Murillo (right-hand man of Doria Medina), as Minister of Interior, and a prominent anti-chavista as Minister of Foreign Affairs.

Therefore, in order to fight the coup it is necessary to point towards the economic power of the capitalist oligarchy and abandon once and for all the idea of reconciliation and making concessions to their interests. To defeat the capitalists we must seize their economic power (the factories, the land, the banks) from which their political power stems.

It is a must that militant miners, industrial and teacher’s trade unions call for strike action and proceed to: