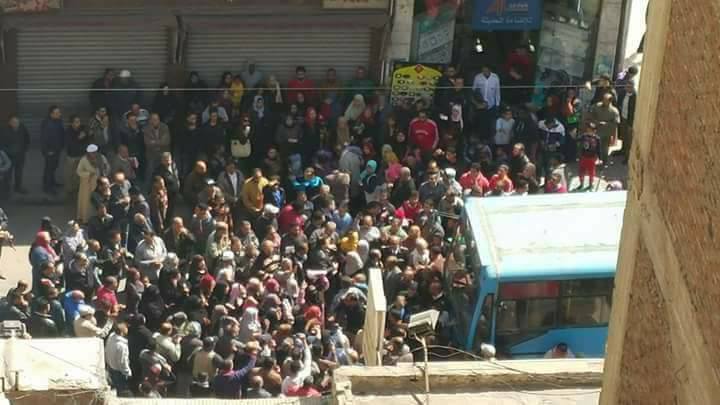 Yet another crisis has been haunting Egypt’s 3 July military regime in the past three days. Hundreds of Egyptians in different cities have come out to protest cuts to subsidised good - mainly bread - in a militant and angry reaction to the Al-Sisi’s onslaught against the workers and the poor.

The subsidy cuts were announced earlier this week, with the newly appointed Mubarak-era Supply Minister, Ali Meslehi, unilaterally deciding to cut the number of subsidised goods for lower ranking categories of subsidy cardholders - mainly the most impoverished people. The ironically named the golden card category, includes individuals who hold paper cards or who have no cards. Each government controlled bakery usually gets 1500 loaves of subsidised bread for this category, but that has now been lowered to 500. The ration has been reduced even further for the individual cardholders who could buy 20 subsidised loaves of bread before, but who will be limited to 5 now. That is, if they can find them.This will have a huge effect on the day to day lives of the poorest layers in society.

Starting on Monday, when the decision was taken into, minor protests erupted in marginalised cities. These protests were ignored by the media at first. However, on Tuesday, protests broke out in major urban areas like Alexandria, Giza, Minya, and Kafr Al-Sheikh.

In the lower class neighbourhood of Imbaba, Giza, hundreds stormed into the government controlled subsidised goods office, and clashed with employees before the arrival of riot police. The furious crowd was lining up from the early morning to receive their daily rations only to be met with the oppressive decision. Imbaba is one of the country’s poorest neighbourhoods.

In Alexandria, the militancy spread across the city, including Al-Mansyisha and Dikhila, two of the main working class areas, protests also lead to road blocking and chaos. The failed attempts of the police to intimidate protesters were accompanied by the crowds chantings against the minister and the government.

Later Tuesday night, the minister appeared on TV defending his decision and saying that wants to stand up against the corruption of the bakery owners and those who commit fraud with subsidy papers to get cheaper bread. In effect he is blaming the poor

The decision which clearly targets the poorest is part of a broader onslaught by the Egyptian state which has also cut subsidies and raised prices on public transportation, fuel and medications. This pressure on the masses was raised even more when the government decided to float the Egyptian Pound, leading to a sharp depreciation against the US dollar. Al-Sisi’s propaganda machine along with his diplomatic and ministerial puppets have been defending this decision worldwide. But this step, which the governor of the Central Bank of Egypt Tarek Amer described as a step “that made his wife happy”, has caused enormous misery for Egyptians who are already struggling with poverty.

Bread riots have a certain tradition in Egypt; In 2008, bread riots lead culminated into protests which in turn saw several deaths due to police repression - The martyrs of bread. Since then nothing seemed to have changed: Ali Meselhi - who was back then a part of the policy secretariat for Mubarak's ruling party - is now chairman of the economic committee in Egypt's parliament following the revolution is responsible for the supply of basic goods. The same faces which ruled Egypt in the Mubarak era are working themselvces back to the same positions today.

Meanwhile the Egyptian intelligence agency , the notorious “Mukhabarat”, has paid millions of dollars to hire two US PR firms to lobby in the West to improve the image of the country abroad. The state is also desperately trying to glamourise the image of the country’s tourism industry, especially after the violations against foreigners such as the murder of the Guilio Regeni and the recent killings of a bus full of Mexican tourists by the army.

While Egypt is spending millions on improving its image abroad in the parasitic fields of tourism and diplomacy, the country’s poor - an electoral power which Al-Sisi relied on to come to power - are suffering under the physical by the army and the police as well as economic oppression by Sisi’s economic policies.

Tuesday’s protests shouldn’t be seen in the context of other minor uprisings that has taken place against Al-Sisi and his regime. Earlier in February, people in Port Said staged an act of  civilian disobedience by turning off lights in protest of death sentences against ten of the city's men for alleged participation in the massacre of the Port Said Stadium. In November 2016, another protest took place among young Coptic men criticising the  lack of governmental intervention to secure the Abbasia Cathedral when  members of the Islamic State bombed the church claiming the lives of 27 Copts. In September of the same year, locals in different cities protested shortage in subsided baby formula, which lead to the army taking over the business and monopolising the industry.

All of this reveals the deep crisis that Egyptian capitalism finds itself in. Rotten to the core, it is incapable of providing the bare necessities of life to the Egyptian masses. 100 years after the Russian Revolution, the slogan of “bread!” is heard amongst the Egyptian masses. The only way to solve this problem, is for them to follow the example of the Russian workers and peasants, to take power into their own hands and overthrow the capitalist system altogether.