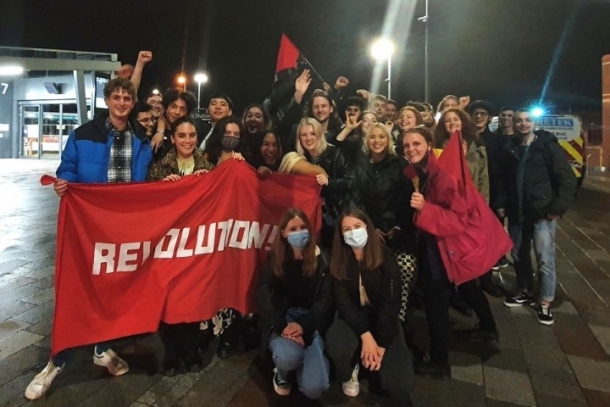 It’s been an amazing start to the new academic year for the MSF, with thousands signing up to Marxist societies across the country, participating in meetings and reading groups, and organising on campus. Join the Marxists! Join the revolution!

This year’s freshers period has come to an end. And what an incredible success it has been! The Marxist Student Federation (MSF) has taken campuses by storm, signing up a record-breaking 3,487 people to Marxist societies at 48 universities.

The current crisis of capitalism is the deepest in history. The Tories are relentlessly attacking the working class. Young workers have been hit the hardest during the pandemic, leading to the highest youth unemployment rate in over five years.

The scourges of racism, sexism, and LGBT oppression continue to run rampant in society. And on top of this, the planet is hurtling towards catastrophic and irreversible damage to the climate.

All the while, Keir Starmer and the Labour right wing are spending more time fighting the left and expelling the Marxists than fighting the Tories.

All of this has contributed to a massive radicalisation amongst students and youth, who are looking for an explanation for today’s crisis-ridden system.

The results from the MSF’s activities over the last month show that thousands are looking to fight for change and organise around revolutionary ideas.

The excitement and enthusiasm seen at Marxist society freshers stalls and meetings has been electric. And this has translated into a greater presence of the MSF across UK universities than ever before.

Over the last few weeks, Marxist societies have seen huge numbers of sign-ups – notably at Cambridge (with 360) and at KCL (with 280).

And this year the MSF was present for the first time at 12 new universities, including UEL, UAL, Nottingham Trent, Leeds Beckett, Lincoln, and Westminster.

Many of those signing up already call themselves Marxists and revolutionaries. They’ve arrived with a thirst for theory and ideas, and are eager to join the reading groups that the societies are hosting as part of the #ReadMarx campaign.

As Marx himself said; “Philosophers have interpreted the world in various ways, the point however is to change it”. Any worker, any student is able to read and understand Marxism. That is the point of it. It is time to #ReadMarx for yourself.
Join one of our reading groups NOW!✊ pic.twitter.com/rkJxyqlHhK

In Oxford, comrades reported that people were specifically looking for us at the freshers fair, with students mentioning that they already knew about Socialist Appeal and the International Marxist Tendency.

Many were specifically asking about plans for reading groups on classic Marxist texts.

Comrades from the Cambridge Marxist Society reported something similar:

“It is clear that many students are turning towards more revolutionary conclusions. Freshers have been eager to join. Our first meeting was packed, with over 40 in attendance, and over 15 people signing up to a reading group on the Communist Manifesto.

“This is the best start to the term in the history of the Cambridge Marxist society, and will pave the way for an amazing year of revolutionary education and action!”

Education in the Marxist societies includes thorough discussions on texts by Marx, Engels, Lenin, and Trotsky.

And the passion for theory has been evident from sales of our books, pamphlets, and papers, with over £1,000 of material being sold across the country in recent weeks. All this will go towards financing the production of more educational resources.

All of the Marxist societies have had their first meetings by now. Most of these have been on the topic of ‘What is Marxism?’ or ‘Why Marx was right’.

Comrades have reported incredible turnouts of 40-70 people at many of our meetings, with excellent political discussions covering a range of questions. Overall, the result has been almost one thousand students attending MSF events across Britain.

In Glasgow and KCL, comrades reported 50 people at their first meeting. In Leeds, attendance was even higher, with 70 people coming to the Marxist society’s opening event of term.

The Glasgow comrades also reported on the success of their Red Clydeside crawl:

“We had advertised the start time and location separately, so we were met with another crowd of people when the main group arrived! We filled the streets on the first stop of the tour, and over-filled the pubs.”

Thanks to everyone who came along to our freshers meeting and sub crawl last night! It was a really good discussion and a great tour around the city. Your generosity raised £50 for the society and we hope to see you all at our next meetings. ✊🚩 pic.twitter.com/1rGLGO39Au

And this is only the beginning.

Marxist societies across the country have many more political discussions, reading groups, and activities planned for the rest of term.

We are currently celebrating Black History Month – not in a liberal, tokenistic form, but rather by discussing concretely how to unite and fight against racism.

In Cambridge, for example, a recent meeting on Marxism and black liberation saw over 60 people in attendance, with Fiona Lali (national organiser of the MSF) speaking on why the struggle against racism must be a class struggle.

Marxism and Black Liberation was another huge success. Thank you @rubanga_a for the incredible talk. pic.twitter.com/kjYHA55NM5

And in November we will celebrate the Russian Revolution, discussing the inspiring events of 1917, and their relevance to today.

The MSF will also be linking up with staff on campuses to support their strikes, organise student-worker solidarity, and defend education.

This month, the UCU is balloting for strike action. In the likely event that higher education staff vote for action, the Marxist societies will be mobilising students to support workers and defend the strike.

We will also be organising students from schools, colleges, and universities to attend the COP26 climate protests on 6 November in large numbers.

And next Friday, each and every Marxist society will be travelling to London for the biggest and most important event in the calendar: Revolution Festival 2021.

This year’s in-person festival – taking place from 29-31 October at the Friends House – will provide an incredible opportunity to meet Marxists from across Britain and Europe, and to participate in lively discussions on theory, history, and the most pressing issues facing socialist activists.

There’s never been a better time to be a Marxist. So get involved today: Join your local Marxist society! Join Socialist Appeal! Join the revolution!