We all know we are supposed to recycle plastic. We are taught the three R’s in school, at home, and at the workplace: “reduce, reuse, recycle.” From an early age, we learn to separate plastics from trash using the recycling triangle and to put the blue bins out on the sidewalk once a week since doing so can help combat pollution, in particular the pollution of the oceans. We are taught that we can all be a part of the solution—if only we recycle.

The problem, however, is that plastics recycling is not and never has been a viable solution to pollution. As a recent NPR and Frontline exposé explains, the recycling industry was built from its inception on a lie: that plastics could be and would be recycled. Why? To sell more plastic in the first place. In other words, recycling is not a viable system for waste management on a vast scale, but an advertising scheme. Plastic manufacturers have mislead the public into believing that plastic waste would be recycled / Image: Andy Arthur, Flickr

Plastics began to hit the American marketplace in bulk in the 1950s. According to the EIA, “plastics are produced from natural gas, feedstocks derived from natural gas processing, and feedstocks derived from crude oil refining.” As a result, the sale of plastics represents a significant source of revenue for the big oil companies. But in the early 1980s, the oil industry ran into a problem: it was not selling enough plastic to turn a profit. Research internal to the oil industry, uncovered by NPR two years ago, discovered one reason why: plastic was identified with pollution in the minds of consumers. People didn’t want to buy products they knew would simply end up in the environment, their neighborhoods, or water supply.

At the same time, legislation was being proposed at the local, state, and federal levels to regulate the use of plastics and limit the effects of plastics pollution on the environment. This presented a major problem to the source of big oil’s profits.

So, in a series of boardroom meetings, oil executives came up with a solution: change how plastics are marketed. If people think that plastics can be recycled, if people think that they can combat pollution by recycling, then people will buy more plastic.

The problem is that plastic is incredibly difficult—read: unprofitable under capitalism—to recycle. Plastic is not a uniform material. There are many different types, which must be sorted and broken down before being reformed and reused, a complicated process in and of itself. Further, plastic materials degrade with each reuse. In short, it is cheaper to produce new plastic from oil than to recycle old plastic.

Capitalism is run solely to pursue profits by individuals who must ensure their companies’ market viability. Thus, oil executives launched a $50 million advertising campaign in the 1990s that sent a clear message: plastics can be recycled, are easy to recycle, and thus pose no risk to the environment. Furthermore, the responsibility to protect the environment lies with “us,” i.e., workers and capitalists equally. 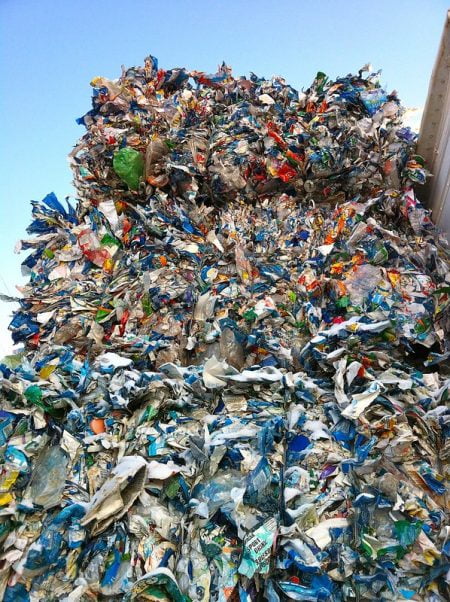 Plastics must go through a complicated and expensive sorting process to be recycled / Image: JoslynLM, Flickr.

The industry then invested in “feel-good products,” such as non-profits, awareness campaigns, and recycling plants. All while lobbying governments to put the triangle on all plastics regardless of recycle-ability and creating various “plastics councils”—think tanks and research bodies—with oil money. And it worked. Plastics production and the profitability of this industry skyrocketed over the next 30 years. Not only did the local, state, and federal governments buy into this trick, but so did environmental activists such as Greenpeace, who promoted recycling as an individual, choice-based way to fight the pollution of the oceans. Today, throwing your plastic in the blue bin is a muscle reflex.

However, as companies like Exxon, DuPont, Dow, and others have known since its inception: recycling doesn’t work because it isn’t profitable. None of the dozen recycling plants that NPR looked into lasted for more than a decade. To this day, only 10% of plastics have been recycled worldwide. For 30 years, plastics that end up in recycling bins are simply moved across the world, sold to countries such as China or Indonesia, which are equally unable to recycle this material, so it is sold further down the line and, eventually, tossed into landfills or the ocean, where it has accumulated in veritable mountains, down to the deepest depths, and gathering in human blood samples and lung tissues.

The lie, of course, did wonders for these companies’ bottom line: the oil industry makes $400 billion per year making and selling plastic, and is currently investing in even more plastics production, betting on the fact that future profits will come more from plastics than from oil and gas as the demand for electric cars and trucks rises.

Environmentalism without class struggle is a road to nowhere.

As we have pointed out before, ethical or green consumption is no real solution to the global environment’s problems. These “solutions” pose no risk to capitalism, i.e., to the bottom line of capitalists who own and control the very industries that do the most polluting. The recycling lie is just one example of this fatal flaw of consumer-based environmentalism. Airlines flying empty planes in order to save spots at airports, and oil companies burning gas they can’t sell are others.

If recycling is not profitable for the capitalists, then the recycling, plastics, and oil industries should be taken into public ownership and operated under democratic workers’ and public control. But we shouldn’t stop there. The majority of the world’s pollution comes from industry itself—the Fortune 500 companies being the primary culprits. Just 100 companies have accounted for 71% of all global greenhouse gas emissions since 1988. These companies should be nationalized and run under democratic workers’ control, in harmony with the environment.

Since the Democrats and Republicans represent the capitalists, they cannot be part of the solution. Only a workers’ party and a workers’ government can begin to address this disaster by rationally and democratically planning the economy, paving the way for world socialism and environmental sustainability.