The Trade Union Block of the Social Unity in Chile has demanded that the government introduces an immediate preventative quarantine to fight the spread of Covid-19, otherwise, it will call a “humanitarian general strike” in order to shut down all economic activity “which is not essential for the maintenance of health and life”. Meanwhile the hated Piñera government is attempting to use the health emergency to put an end to the five month old uprising.

Chile has over 400 cases of Covid-19 and the number is increasing exponentially. After initially dismissing the threat from the epidemic, President Piñera declared a national state of emergency on March 18. The contents of his statement had little to do with fighting the pandemic and everything to do with giving himself powers to bring the army on the streets, banning gatherings of over 500 people and generally curtailing democratic freedoms, particularly the right of assembly and demonstration.

He decreed the closure of schools and universities, border checks (the virus has been brought into Chile by travellers) and other basic measures which different sections of society had been demanding for days. However, as in other countries, the overriding criteria was to defend the interests of the capitalists and bankers which his government represents. While closing schools, there were no measures to cover parents who might now have to stay home. Productive activity was to remain fully operative.

There was a second criteria in Piñera’s measures: that of dealing a blow to the mass uprising which has shaken the country since October 18, exactly five months ago. The movement reached its peak in November and could have easily led to the overthrow of the government, had it not been for the glaring lack of a clear revolutionary leadership. That, added to the summer holidays, meant a temporary lull in the movement. However, the month of March marked the beginning of a new offensive of the peoples’ uprising. There were massive Women’s Day marches and a two day national strike on March 8 and 9. School students launched a movement of school occupations which rapidly spread throughout the country. 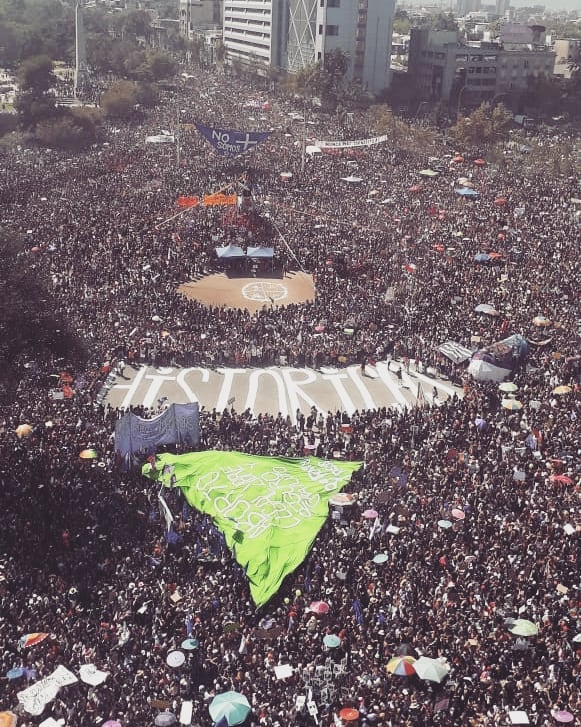 There were massive Women’s Day marches and a two day national strike on March 8 and 9 / Source: Coordinator 8M

The Covid-19 pandemic could not come at a better time from the point of Piñera’s hated and extremely unpopular government. Or so he thought. Banning gatherings of over 500 people makes no sense, as if the virus wouldn’t spread in gatherings of 100! Bringing the army onto the streets has nothing to do with health reasons and everything to do with legitimising repression.

As well as giving himself and the Army emergency powers, the government signed a deal with all political parties to postpone the Constitutional referendum which was scheduled to take place in April. This referendum was the trick the regime used in November to try to placate the movement. Scandalously, all opposition political parties, including this time also the Communist Party, signed the deal with the government. The question is not whether the referendum would take place in April or not. It is clear that in the current conditions of the Covid-19 epidemic, the referendum cannot be held. What is scandalous is that left wing parties should appear as giving legitimacy to the government and its agenda to de-mobilise and crush the movement of the working people.

Nevertheless, the government and the whole regime is extremely unpopular. The people do not trust it to deal with this health emergency. In fact, one of the reasons for the October uprising was precisely the demand for health care for all. The Chilean health care system, largely privatised, is woefully unprepared to face Covid-19. The number of hospital beds per 1000 inhabitants is only 2 (compared to 8 in Germany, or 6 in France). There are only 590 ICU beds in the public sector, when an official report says 5,000 will be needed to deal with the epidemic.

Workers at several shopping malls in the capital Santiago walked out of their jobs and started to protest, demanding to either be given personal protective equipment or be sent home. On March 17, drivers in some of the SUBUS company lines refused to work unless they were given PPE. In response, the company decided to sack 28 workers, which triggered a mass walk out of the whole workforce.

In this situation of enormous pressure from below for measures to be taken to protect workers and the population in general the Trade Union Block of the Social Unity (the coordination committee of trade unions and social organisations set up during the uprising), issued a very strongly worded statement.

They demanded the immediate declaration of a preventative quarantine, closing down all non-essential sectors of production. At the beginning the demand was made to the government and came from the Colegio de Médicos, the doctor’s professional body. However, when the government refused to even engage with the Social Unity organisations, they issued another statement on March 19 declaring that since the government was not listening, the trade union organisations would declare a “humanitarian strike” to start on March 20 and shut down production themselves. “If the authorities and the powerful do not look after us, we will”, they said.

This is a question which has also been posed, to different degrees, in one country after another. Workers in Italy, Spain, Austria, Canada and the US, have walked out of their jobs demanding protective measures and the closure of all non-essential economic activity. The fight against Covid-19 reveals clearly the contradiction between capitalist profits and the lives of workers and people in general.

As well as the closure of all non-essential economic activity, the unions also demanded economic measures to support workers and small businesses, the banning of all redundancies and lay-offs, a ban on wage cuts, price controls to avoid speculation and racketeering, protective measures for all those workers in essential sectors, a mortgage holiday, etc.

These demands are of course, very positive, though they do not go far enough. It is clear that in a situation like this, the central demand which is missing is the expropriation of all private health care facilities and an emergency plan to create hundreds of additional ICU beds. All workers who have to stay at home because of the quarantine must be guaranteed the payment of their wages. Measures should be taken to protect workers in the informal and precarious sectors of the economy which represent 38% of the workforce.

At the time of writing these lines it seems that the call for a general strike issued by the Social Unity has not had a big impact. This is not surprising. The Social Unity itself is discredited and for instance played a negligible role in the March 8 and 9 general strike. The leaders of the organisations represented have a tendency to make grandiose statements and public press conferences, which are then not backed up with mass assemblies and agitation in the workplaces.

However, the mood in Chile is one of pent up anger. The people can see how the extremely discredited government is cynically using the health emergency for its own callous reasons. The fact that the Social Unity has called for workers’ to take the matters into their own hands is extremely significant and poses, potentially, the question of who rules the country: the Piñera government or the working class.

The movement to fight the pandemic and protect the health and lives of the workers and the people in general must be linked to the demand for the overthrow of this government and the whole regime it represents.