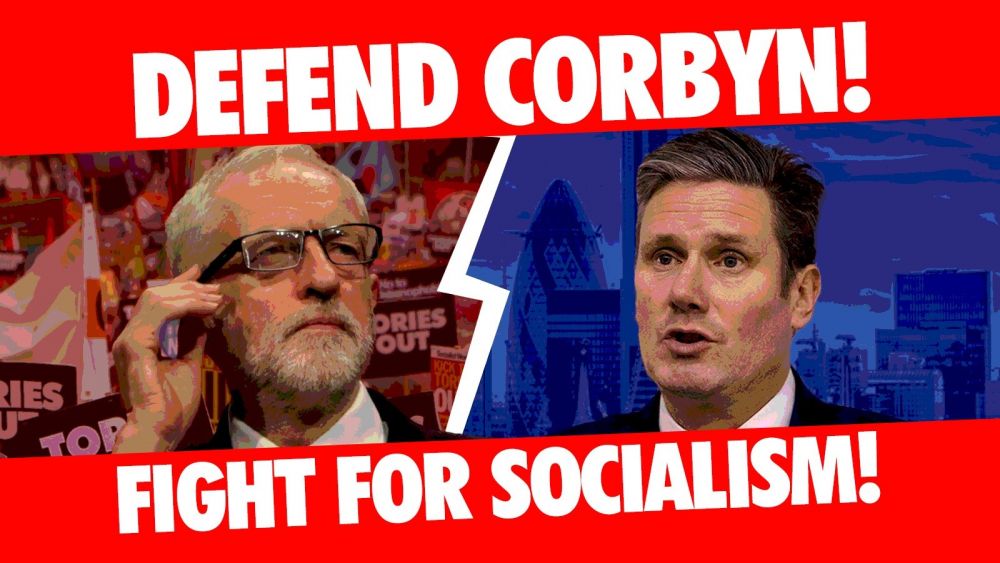 By suspending Jeremy Corbyn, the right wing has thrown down the gauntlet. A full on witch-hunt is underway – to purge the left and make Labour a reliable party for big business. The left must mobilise and boldly fight back.

The suspension of Jeremy Corbyn is a declaration of war.

In reality, the Labour right wing has been ruthlessly fighting a war against the left for years now. In this time, the Blairites and bureaucrats have made several declarations of war. Their aim is nothing short of a total liquidation of the party’s left wing.

We must not allow this. We must fight back immediately, mobilising the hundreds of thousands of left-wing Labour Party members who are shocked and appalled at this brazen attack.

We must show the right wing they have miscalculated badly. This means launching an immediate fightback – a gloves- off battle, with no holds barred.

Keir Starmer has quickly moved to exploit the Equality and Human Rights Commission’s (EHRC) report into alleged anti-semitism within the Labour Party.

And yet, despite what the mainstream media tells us, the EHRC report says nothing to back up the claims about Labour being institutionally anti-semitic. In fact, the document notes that the party improved its handling of such cases under Corbyn’s leadership.

The only substantial finding against the party is ironically a product of the relentless campaign against the left by its right wing. The only instances of political interference into anti-semitism complaints, the report concluses, were when Corbyn’s office intervened to push for stronger punishments against alleged perpetrators of anti-semitism in the party!

The report concludes that this is still unfair and prejudicial against Jewish people, because it creates an atmosphere and precedent of political interference into anti-semitic abuse.

Quite clearly, the drumming up of this issue by the right wing is the only real case of ‘political interference’, and was precisely intended as such. By creating a hysteria inside the party and the media, the Labour right wing intended to prejudice any and all investigations, to the detriment of Corbyn and the left.

The Blairite leaders of this smear campaign have done nothing but cover themselves in shame for the past five years.

If the Labour right wing were remotely concerned about the effect on Jewish people from political interference, they wouldn’t have spent five years manipulating and exaggerating anti-semitism for their own cynical political ends.

In fact, the report highlights that once Corbyn got control of Labour HQ (which didn’t happen until 2018), the handling of anti-semitism cases actually improved. At the same time, the EHRC investigation also remarks that the endless promotion of this question has been detrimental to the party’s ability to examine cases of racism against members of other ethnic minorities. 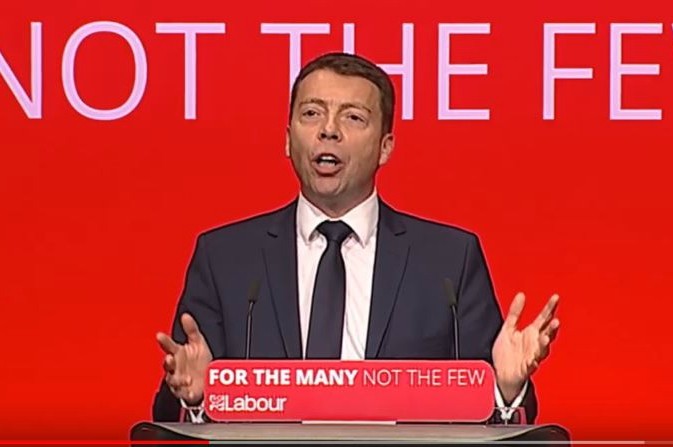 It is also scandalous to talk of political interference into allegations of anti-semitism in light of the leaked Labour report. This demonstrated the revolting conspiracy by the party bureaucracy to undermine and purposefully drag out accusations of anti-semitism, so that Corbyn’s leadership would appear not to be taking the matter seriously.

If Starmer showed even an ounce of this determination when fighting the Tories and their incompetent profit-first approach to the pandemic, we wouldn’t have to rely upon a footballer to lead the opposition against this shambolic government. 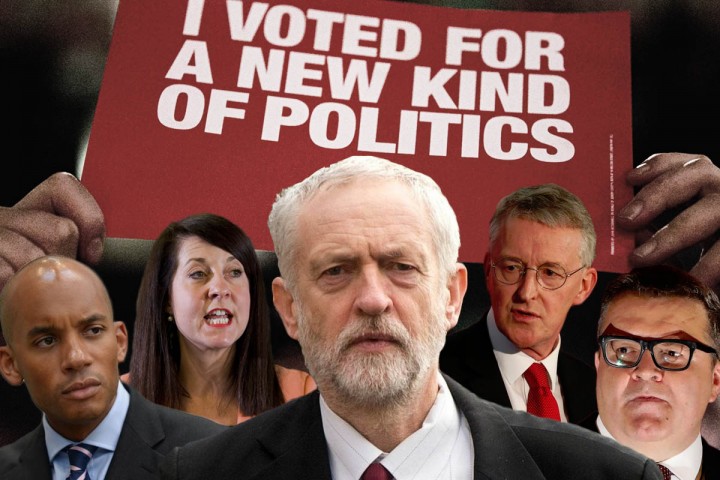 The right wing has hidden behind claims of anti-semitism because they cannot take on the left openly and honestly / Image: Socialist Appeal

The entire experience of the past five years has graphically revealed that the Labour Party right wing and bureaucracy is nothing but the organised intervention of the ruling class within what should be the party of the working class.

These big business agents have been dogged, determined, and spiteful in the extreme. This is because they represent the establishment, and know that they can rely upon the capitalist media and every other bourgeois institution to back them up. They are highly organised, and also well funded.

But what they lack is genuine mass support. They have no arguments, no inspiring leaders, and no popular policies – because they represent the status quo. Hence Starmer’s incredibly tepid ‘opposition’ to Johnson in the midst of the greatest crisis in living memory.

Starmer has nothing to say. He knows that if he were honest, he would only repel people. This is why he lied through his teeth during the leadership election. He knows he cannot say “vote for me and I promise to change nothing, because I really represent the bankers”.

It is for this reason that for all these years the right wing has hidden behind claims of anti-semitism. They cannot take on the left openly and honestly. Lacking any arguments or real support, they have concocted a Frankenstein’s monster of identity politics.

In the atmosphere they have strived to create, any accusation of anti-semitism must be treated as automatically correct. The EHRC report’s recommendations mean that anyone can make a disingenuous allegation of racism, and the accused cannot not defend themselves on the basis that the allegation itself is malign.

Such a situation is tailor made for a political tendency that has no arguments, and whose policies only represent the discredited status quo.

The right wing will now attempt to push forward by going after the entire left wing of the party. The Campaign Against Antisemitism – a right-wing organisation determined to destroy the Labour left – has already submitted complaints against 15 left-wing Labour MPs. If successfully kicked out, this would decapitate the party’s left wing.

Labour staffers have been instructed to trawl social media for statements from left-wingers criticising the EHRC report, so they too can be summarily expelled.

Labour staff are being encouraged to comb social media to find members questioning the EHRC report. Many, many more suspensions could follow that of Jeremy Corbyn. pic.twitter.com/2MTq91rks5

We must tell the truth. This is nothing but a witch-hunt against the left. And the right wing will stop at nothing. This is the start of their ‘Red Wedding’ – an attempted bloodbath of the Corbyn movement, to purge the left from the party and once again make Labour a reliable Second XII for the ruling class.

Appeals for ‘unity’ are pointless. Today’s events have shown how meaningless and hollow this term is. This is a civil war between two opposing armies. We need to wage an implacable struggle. But this can only be done by standing firm and speaking out. We will not be silenced! 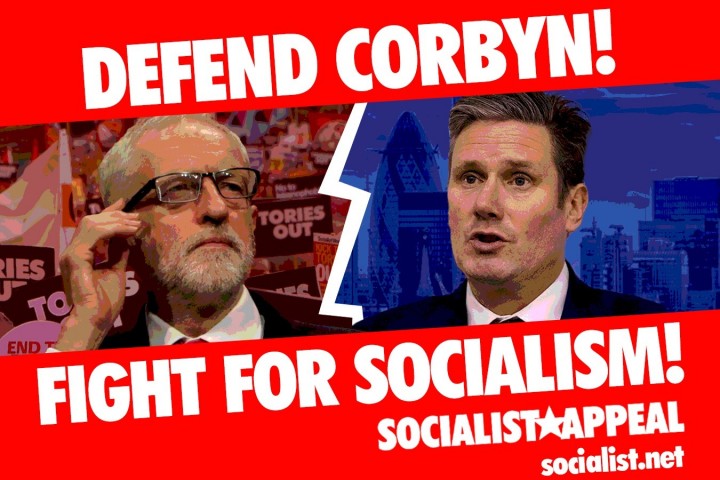 It is high time the Labour left learned a bitter lesson. We are at war, and our enemy is implacable. But our enemy is also small in number, is unpopular, and has time and again been defeated in recent years.

As with the chicken coup in 2016, the left has always won its battles on the basis of mass mobilisation, grassroots organisation, and bold political struggle. It is these same militant methods that must again be deployed in order to defend the Corbyn movement and fight for socialism.

There is no reason for defeatism. It is not too late. Corbyn and the entire left of the party must mobilise an immediate mass campaign against these attacks. Our model motion must be passed up and down the country.

We must show that the vast majority of Labour members want Starmer – not Corbyn – out. ‘Sir’ Starmer has already betrayed the pledges he stood on. And now he is abusing his office to undemocratically remove the former party leader who most members still look to.

The fight to defend Corbyn must be linked to the ongoing struggle for genuine party democracy – most crucially, the democratic right of rank-and-file members to hold their representatives to account through mandatory reselection.

These saboteurs and careerists in the PLP have abused their members far too many times. It is they who must be removed, and replaced with genuine class fighters, who will lead the charge for clear socialist policies.