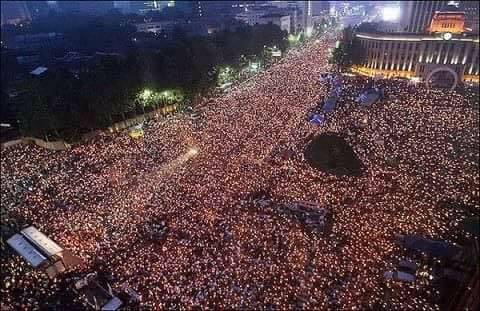 On Saturday more than 200,000  people took to the streets in South Korea calling for President Park Geun-hye to step down. This latest protest, was the biggest for several years and it highlights the deep crisis of the Park government.

The crisis began after it was revealed that president Park's old time friend, confidante and spiritual adviser, Choi Soon-sil may have been deeply involved in running the country from behind the scenes. She has had access to secret government documents, significant influence on policy and has also been involved in corruption using her ties to the government. Choi is now under arrest on charges of abuse of power and attempted fraud. Warrants have also been issued for the arrest of other former advisers of Park, who have also been involved in the scandal.

Leaked documents from the U.S. Embassy have described the late Choi as a Rasputin-like figure. That comparison might be more real than imagined. Rasputin was a mystical faith healer and adviser to the Tsarina in Russia and was murdered shortly before the Tsarist regime collapsed with onset of the Russian Revolution. The Park regime could also be on the verge of collapse. 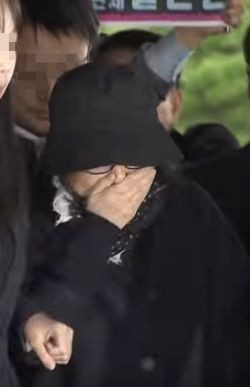 A rare picture of Choi Soon-sil - Photo: KBSPresident Park has apologised and sacked her Prime Minister, Finance Minister and National Safety and Security Minister, and brought new faces into the government in an attempt to save herself, but to no avail. Her approval rating has plummeted from 30-50 percent to 14 percent and is now down to 5 percent, which is the lowest since the polls began in 1988. This epitomises capitalist democracy which allows the rule of a president with almost no public support.

While the Park government is in a deep crisis, the working class is also on the move. The more radical umbrella union, the Korean Confederation of Trade Unions (KCTU), is leading a new strike wave. This comes after several years of rising strike figures led by militant unions against anti-labour government which has so far resulted in several partial general strikes and hundreds of thousands coming out on the streets. 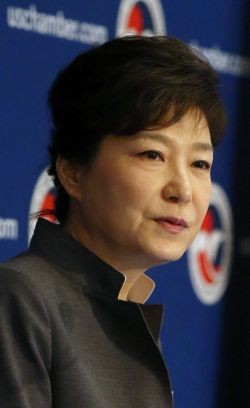 Park Geun-hyeThere were minor strikes in the spring, but over the summer there was a new big surge in the strike wave, which have continued with the current movement. On 26 September 50,000 workers at Hyundai, one of the largest conglomerates in South Korea, went on a one day strike. This was the single biggest strike action in the history of Hyundai and it is the 21st nationwide strike at  Hyundai this year - another record. On several occasions, hundreds of thousands of workers from other industries have joined Hyundai’s struggle. On 27th of September different unions representing 60,000 public sector workers under the KCTU embarked on an unlimited strike, including metalworkers, health and public transport workers.

The strike is directed against repressive labour reforms, attacks on the public sector, repression against organized labour and the death of an elderly farmer, who was hit by a police water cannon last year during a demonstration, and who was in a coma until he died in September. Subcontracted workers organized by the KCTU have also been on the move for direct employment.

Thousands of metro and railway workers, who are part of the public sector workers’ strike, have been on strike for 43 days - and the strike is ongoing. Just after the strike began, the government declared it illegal. Many union activists who have participated in the struggle have been suspended or sacked from work or put in jail. There has been several minor victories, but the railway workers’ strike is still continuing and has now become the longest rail strike in Korean history. The KCTU has also adapted the call for Park's resignation.

The rising strike movement has further deepened the crisis of the regime. It is hard to tell how deep the government scandal goes and how much more dirt is still to be revealed. However, the crisis has brought into the open the rottenness and corruption of the the South Korean ruling class. While workers are working themselves to death, the Chaebols (big family-owned conglomerates) and their political puppets like president Park, are using the state to enrich themselves... that is, when they are not busy praying to ghosts and spirits!

President Park has been taking up her father’s tradition and has been moving in a more and more authoritarian direction. This process has been highlighted in the repressive measures used in the government’s battle against the unions. A clear example of this was the five-year prison sentence meted out to the KCTU president, Han Sang-gyun in July. The charges against him were that he had “organised rallies”. Han's response was: “I am not guilty as long as you comrades believe so. The repression by the current government is much severer and more deliberate. We have to be prepared to fight back”.

It is likely that the ruling class would like to see Park leave in order to maintain the stability of the system. But that is easier said than done. The removal of Park could encourage the masses to continue mobilisations for more far reaching demands. Furthermore, Park, with her thousand and one strings to the state and the ruling class, would not leave voluntarily, but would step up repression to defend her position. Needless to say, this would only deepen the polarisation in society. The point is that this crisis cannot be reduced to Park's person or the governing clique. It is a symptom of a much deeper crisis in the whole of society, which can neither be solved by removing a person from the presidency nor by stepping up repression.

The prospects are not looking good for the South Korean economy. World trade is shrinking and growth is slowing in China, its most important trade partner. Despite the fact that South Korea is a developed capitalist country, with some of the most advanced technology the world has to offer, the country is still struggling with low levels of productivity. This is the case even though the Korean workers are stretched to the maximum in the workplace.

Because there are no strong left-wing parties in the country, much of the frustration in society has been expressed through other channels like the unions and in different social organizations. However, in order to take the struggle to a new level a workers’ party is required which could connect up the different struggles, with the perspective of a radical transformation of society. The KCTU is in a position to call for the establishment of such a party. If such a party were set up it could quickly grow to play a decisive role in the future revolution in Korea.