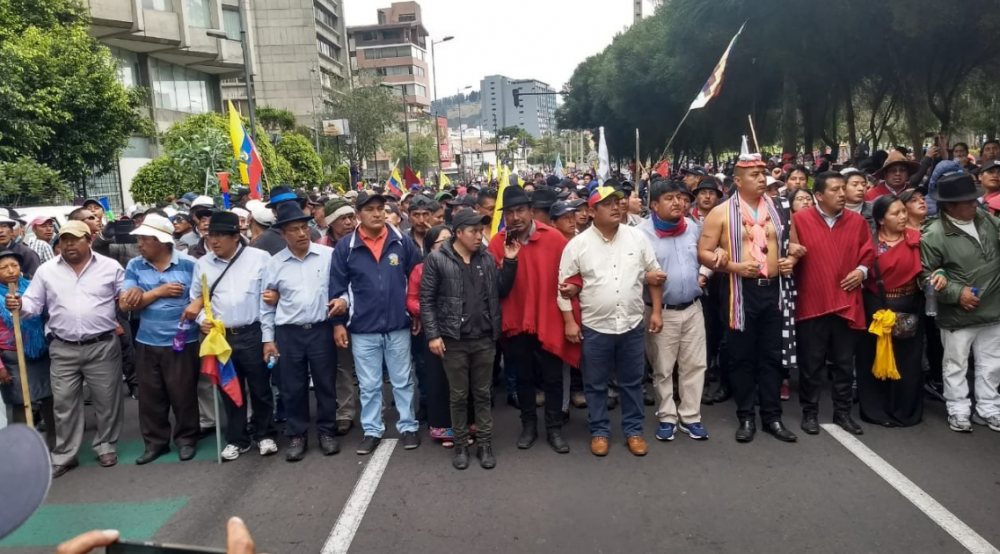 What began as a protest against the IMF package imposed by President Lenin Moreno has become a national insurrection that poses the question of who rules the country. The enormous mass mobilisation has forced the government to flee the capital Quito and close the national assembly. It has also begun to open cracks within the armed forces. To move forward, the movement must raise the issue of power.

This week, the second of the worker-peasant insurrection, has resulted in five dead (at least); hundreds wounded and detained and brutal repression of a level not seen in Ecuador for decades – all of which has failed to stop the movement. Neither the state of emergency, nor the curfew, nor the lies of the media, nor the false offers of negotiation, nor the army in the streets has halted the masses. The government of Lenin Moreno – with the support of the entire capitalist oligarchy, of US imperialism, of all the reactionary governments of the region – has not been able to crush the determined movement of peasants, indigenous people, workers and students.

On Wednesday 9 October, a powerful general strike paralysed the country. In Quito (the capital abandoned by the government), a huge march of between 50,000 and 100,000 protesters was heading again to Carondelet presidential Palace, hurriedly vacated by Moreno the day before. For a few moments, the movement took control of the also-vacated National Assembly, with the intention of installing a People's Assembly.

In Guayaquil, the oligarchy led by Mayor Viteri and her mentor Nebot, whipped up a racist, petty-bourgeois mob against the "Indians." "Let them stay in the moors,” shouted the businessman and banker Nebot, a social-Christian leader, invoking the spectre of the “seizure of the capital” by the indigenous movement: “they do not deserve to step on the ground of Guayaquil, they come to destroy”. But just a few thousand turned up for this reactionary "show of strength". A huge force of police and military personnel was necessary, in addition to public works trucks, to block the National Unity Bridge that connects the populous, working-class city of Durán with Guayaquil, to prevent the passage of thousands of anti-government protesters.

Within the city of Guayaquil itself, there were also demonstrations against the IMF package, about which the complicit media was silent. And it was precisely there that a very significant incident occurred. A group of motorised police arrived at the avenue 9 de Octubre with the intention of attacking a small group of anti-government protesters. A line of soldiers was blocking the demonstrators, but in the face of the onslaught of the motorised police, the military protected the protesters, clashing with the policemen.

This was a small incident, but should be added to other, similar incidents that indicate that the popular insurrection on the one hand and the brutal repression of the state on the other are beginning to make a dent among the private soldiers – who also come from poor, working-class and peasant families.

On the same day, in Quito, the army and the police were aggressively deployed against the enormous, peaceful demonstration that marched through the capital. They used tear gas and truncheons, and drove armoured vehicles into the crowd. The repression was directed equally against everyone: women and children included. At the end of the day, the police threw tear gas into the campus of two universities in Quito, the sleeping quarters of the indigenous people who have moved to the capital in their tens of thousands. There were attempts by the police to attack the Agora in the House of Culture: the logistics and management centre of the movement.

The balance sheet was five dead. One of them, Inocencio Tucumbí, the indigenous leader of Cotopaxi, was killed by a direct impact of a gas canister to the head. Three young men were killed after falling from a bridge in San Roque during clashes with the police. Eyewitnesses say the police pushed them over.

The government – in fact, the entire ruling class, that has come together behind the package and against the insurrection – combined the most brutal repression with false information about an alleged negotiation, mediated by the United Nations and the Catholic Church. In fact, "talks" are taking place with unions and indigenous “leaders” from organisations that do not represent anyone and are not the ones that lead the movement. The government intends to buy off the movement with a few crumbs in the form of "development", paid for with part of the money saved by the abolition of the fuel subsidy (1.3 billion dollars). Again and again, the national indigenous peoples' organisation CONAIE has denied the existence of such negotiations.

10 October, the eighth day of the insurrection, was one of rage and mourning. The media and the government continually spread lies and disinformation, presenting the protesters as violent. More and more images shared on social networks gave an account of the police brutality of the previous day. Motorised policemen were shown striking two indigenous women who were standing quietly in a corner; there were images of a young man, already on the ground, being brutally beaten up, and so on.

Thousands gathered in an extraordinary assembly in the Agora of the House of Culture in Quito, to deliberate and make decisions about the steps to be taken. Eight policemen, who had been patrolling the outside of the building, were disarmed by the movement and brought onto the podium. The local leaders of the movement, one after the other, addressed the assembled crowd of thousands. It was announced that they could confirm two dead on the day of the national strike, and that the authorities had been required to hand over their bodies.

The movement no longer only issues demands, it is beginning to make decisions. The media present were instructed to broadcast the assembly live throughout the country, which they did (partially). Two minutes of silence were held for the dead, and the police were forced to take off their helmets and bulletproof vests as a sign of respect:

At one point, there was a rumour that the police were preparing an assault on the Agora with tear gas. The leaders who presided over the assembly forced the police to call their superiors outside and get a guarantee that they would not enter, which they obtained.

Some proposed to march to the National Assembly in order to take over the building, with the police in front, unarmed, "so that they know what repression is." The atmosphere was one of rage and deep indignation. The slogan of "Moreno out" was on everyone’s lips, and repeated by the assembly in unison. The national leadership of CONAIE, which is one step behind the general mood of the bases, has not yet officially endorsed it, and it does not appear in any of its communiqués.

Another common theme in almost all the interventions was the demand for the armed forces to stop obeying the government. There was a clear call to overthrow the regime. It was also announced that three other provincial governorates had passed into the hands of the people in the Amazon region. From there, more columns of thousands of indigenous people arrived in Quito to strengthen the movement.

Finally, after bringing the coffin (on the shoulders of the police and indigenous leaders) of Inocencio Tucumbi on a walk of honour, and following an official ceremony in his memory, the movement marched through the capital to deliver the now-10 detained police officers to the United Nations.

On the next day, 11 October, again the worker-peasant insurrection marched towards the National Assembly with the aim of taking it. The march, tens of thousands strong, was peaceful and reached the front of the building, which was heavily guarded by police and military. After a period of tense waiting, some military men backed down from their positions. The movement paused. Food was organised, which was also offered to law enforcement officers. There is a clear and correct policy of using all opportunities to fraternise with the ranks of the army.

In a treacherous way and without prior warning, the police used that pause to regroup their forces and launched a new wave of repression, shooting masses of tear gas and pellets against the peaceful and unarmed crowd that was eating in the Arbolito Park. The crowd resisted, evacuating the wounded, making a corridor to take out the most vulnerable, and building barricades. This was a scene of civil war – of class war.

Meanwhile, the cynical Moreno appeared on television offering "dialogue", which was again flatly rejected by CONAIE in a strongly-worded statement. The conditions for any dialogue, as set by the movement, are repealing the fuel decree and dismissing the ministers of the interior and defence, who are responsible for the repression.

But even that falls short of what is already happening. What the movement aspires to now is overthrowing of Moreno. "Whoever leaves Quito, loses his bench" they shout in the streets. Even the idea of pressuring the National Assembly to declare new elections contradicts the practical actions of the movement, which is trying to take the Assembly building to install a People's Assembly – that is, an alternative government. The question of who rules the country is being clearly posed. Is it the rich or the poor? The oligarchy and the IMF, or the working people? The capitalists and bankers, or the workers and peasants?

In practice, the Ecuadorian insurrection already controls a large part of the capital (with the exception of abandoned official buildings), and several provinces in the interior. It is beginning to organise itself, has its own Indigenous Guard, and makes decisions in its assemblies, which are then put into practice.

Now is the time: overthrow the government!

This situation is unsustainable from the point of view of the bourgeoisie and imperialism. Their power hangs by a thread. Hence the effort to prevent the entry of protesters into the National Assembly. It is not simply an empty building (there is already talk of moving the National Assembly to Guayaquil), but a symbol of power.

The uprising has in its favour the courage, decisiveness and will to struggle of tens of thousands of young people, workers, peasants and women, who have fought in the streets against Moreno and the IMF. But it still lacks a clear understanding of the tasks it faces and how to carry them out. 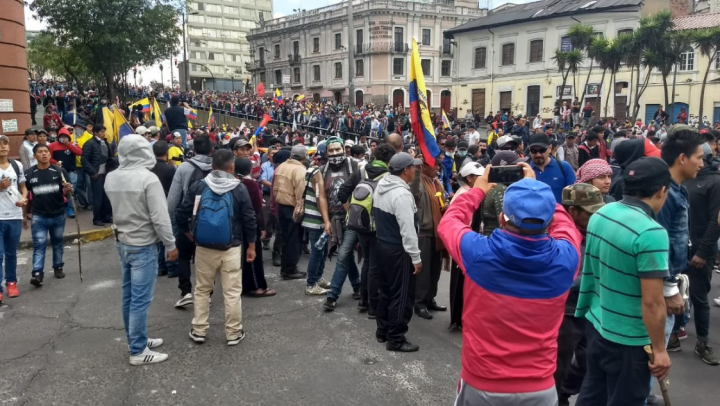 With clear objectives and decisive steps, the movement can succeed in overthrowing the government / Image: CONAIE

It is urgent to proclaim the People's Assembly as a legitimate power and spread it throughout the country. It is necessary to develop it as a true, democratic organism of leadership for the movement, with delegates chosen on the barricades, in the neighbourhoods, in the factories and universities, and in the indigenous communities. Faced with the brutal repression of the police and the army, the elements of self-defence that already exist must be coordinated and developed. The Indigenous Guard must be extended and bring thousands into its ranks. This must be combined with the deepening of the fraternisation with the soldiers, which is already starting to yield results.

We are at a crucial juncture. The struggle for power has been posed, but it hasn't yet been resolved. If the movement does not move forward with decisive steps, there is a risk that fatigue and a lack of perspectives will begin to take their toll. Under these conditions, the government can use selective repression, with cosmetic concessions, to weaken the movement further.

If progress is made with conviction and clear objectives, the overthrow of the government is entirely possible. The movement can storm heaven. Now is the time.