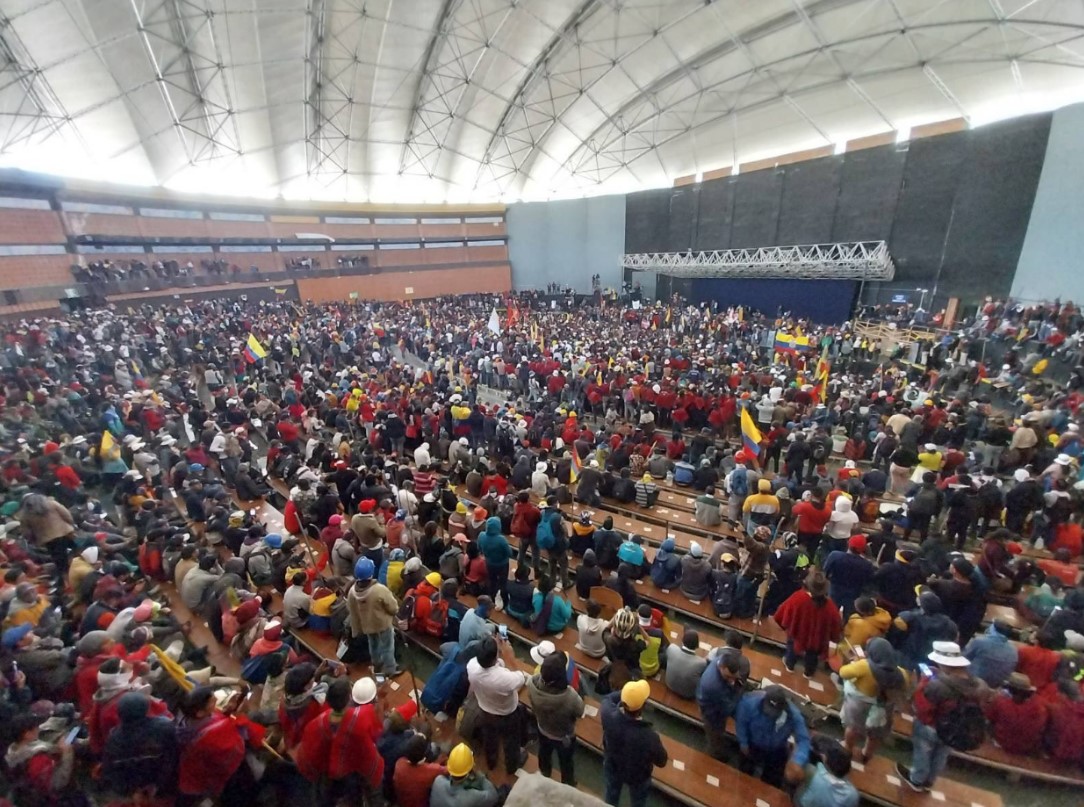 Ecuador is entering the third week of the national strike called by the (Confederation of Indigenous Nationalities of Ecuador) CONAIE on the basis of 10 demands to deal with the cost of living crisis. A crucial point is being reached for the future of the movement. The question of who rules society has been raised, but not resolved. The impasse can cause fatigue and demobilisation. The police violently suppress the mobilisations, even with the use of lethal weapons, which are defended by young people on the front line. Since the national strike began, there have already been five deaths, eight disappearances and at least 127 detentions.

[Read the original in Spanish here]

On Thursday 23 June, the demonstrators had retaken the House of Culture, in the capital Quito. where new mass assemblies were held that same day. The mass peoples’ assembly reaffirmed support for the national strike, demanded the lifting of the ongoing state of emergency, and concrete responses to the 10 points on the mobilisation agenda. After the mass meeting, tens of thousands marched to the National Assembly where there was an attempt at dialogue with the president of the institution. The banker President Lasso, with the excuse that he had COVID, has not received the protesters.

Fearing that the movement would attempt to take over the National Assembly building, as they bravely did with the governorships in the provinces of Tungurahua and Cotopaxi, there was a change of tactics on the part of the state apparatus. In a panic, it intensified the repression with a wave of state violence that resulted in two more deaths.

The Minister of the Interior, Patricio Rosero, openly spoke of increasing repression and authorised the use of shotgun-style pellet rounds. On Friday 24 June, the police attacked the House of Culture while a new assembly was being held, and repeatedly attacked the Central University of Ecuador during the night, where elderly people and children are staying, using large volumes of tear gas.

The brutal repression had the aim of crushing the movement and was combined with a disinformation campaign in the media that falsely said that the peasant columns were beginning to withdraw from the capital.

Unfortunately, the parliamentary caucus of Pachakutik, the political arm of CONAIE, joined this campaign. In a press conference chaired by Marlon Santi, the national coordinator of Pachakutik, they called for the protesters to "return to peace zones" so that no more people would die. The bourgeois press obviously gave wide publicity to this statement in an attempt to demobilise the movement.

The leaders of CONAIE and the other convening organisations stood firm, regrouped forces and explained that the strike continued. The brutal violence from the forces of “law and order” on Friday, which was answered with a pitched battle and barricades, was followed by a massive march led by the women of the movement on Saturday 25 June.

Meanwhile, in the National Assembly, Correa's party, Unión por la Esperanza (UNES), with its 47 deputies, has opened a “muerte cruzada” (literally “two-way death”, by which the legislative branch can dismiss the executive) that demands the removal of the President of the Republic, leading to fresh National Assembly and presidential elections. This was an attempt to provide a way to remove the hated President Lasso through parliamentary procedure.

Right-wing parties immediately declared their opposition to the motion, as expected. All of them are aware that it would be very difficult to re-elect a president from the bourgeois parties in new elections, and whatever the differences that separate the Social Christian Party (PSC) from Lasso, they are united by their common defence of the bourgeois order. 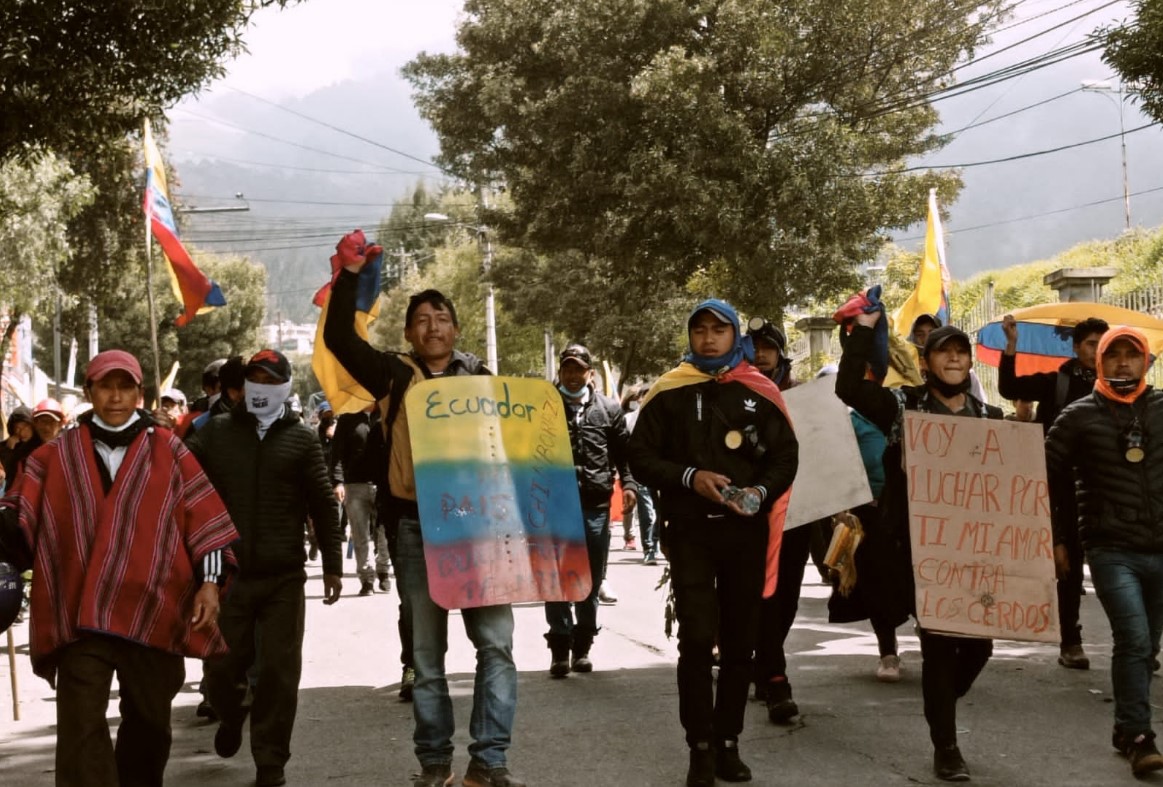 Pachakutik joined a disinformation campaign in the media that falsely said that the peasant columns were beginning to withdraw / Image: Yurak Guaman

The most scandalous thing, however, was the position of the Pachakutik parliamentary group, which is supposed to be the political arm of CONAIE in parliament, and which initially ruled against the motion, that is, in defence of president Lasso! The argument? That the motion was a manoeuvre by Correismo, and that both (UNES and President Lasso) are just as bad and there is therefore no choice.

Let's accept for a moment that this was true: if the UNES motion achieved the necessary votes, the result would be new elections to the Assembly and presidential elections, in which the different parties, including Pachakutik, would compete. How can they be against that? In addition, the UNES motion proposed the dismissal of President Lasso for having approved the state of emergency and repressed the national strike movement called by CONAIE. How can Pachakutik justify a vote against such a motion?

Once again, we see how the extreme sectarianism of some indigenous leaders against Correismo leads them to ally themselves with the banker Lasso, as was already the case in 2015.

The motion against Lasso in the National Assembly, which is being discussed and should be voted on Monday or Tuesday, is unlikely to pass. According to the regulations, a qualified majority of 91 votes is required. Unes has 47 assembly members and Pachakutik 25, so if the latter voted together, there would be a total of 72. The Democratic Left (15) and the Social Christian Party (14) have already declared their opposition. Obviously, President Lasso's National Accord Caucus (25) will vote against it, and the vote of the 11 independents remains to be determined, which in any case would not add up to the necessary 91.

The road to overthrowing the hated Lasso through parliamentary means would seem to be closed for the time being.

As often happens, the IMF first subjects the people of a country dominated by imperialism to a brutal policy of austerity so that they pay their loans, throwing the country into a social upheaval. But when the country enters a state of insurrection, they present themselves as reasonable people and allow the debt to be extended and offer them an additional amount to meet the demands of the protesters.

The government now has an escape valve in the form of a release by the International Monetary Fund of one billion dollars to make some concessions to the movement. This is actually woefully insufficient to meet the needs of the people, and it is unlikely to stop inflation. The crisis of capitalism continues unabated, putting pressure on the workers and poor.

Lasso's government combines repression with partial concessions to try to crush or divert a movement that has acquired insurrectionary characteristics. It has repealed the state of emergency, it has announced concessions in the payment of debts to the Bank of the Nation and on Sunday night it announced a reduction in fuel prices of 10 cents per gallon. With these partial concessions, he tries to weaken the movement and undermine its legitimacy. If he manages to put an end to the movement by these means, then he will go back onto the offensive again, exactly as happened after the agreements that put an end to the insurrection of October 2019.

In these two weeks, the Ecuadorian masses (peasants, indigenous people, workers, women, young people, people from the working-class neighbourhoods of Quito etc.) have shown great courage and a willingness to fight to the end. A correct strategy is required to lead them to victory. 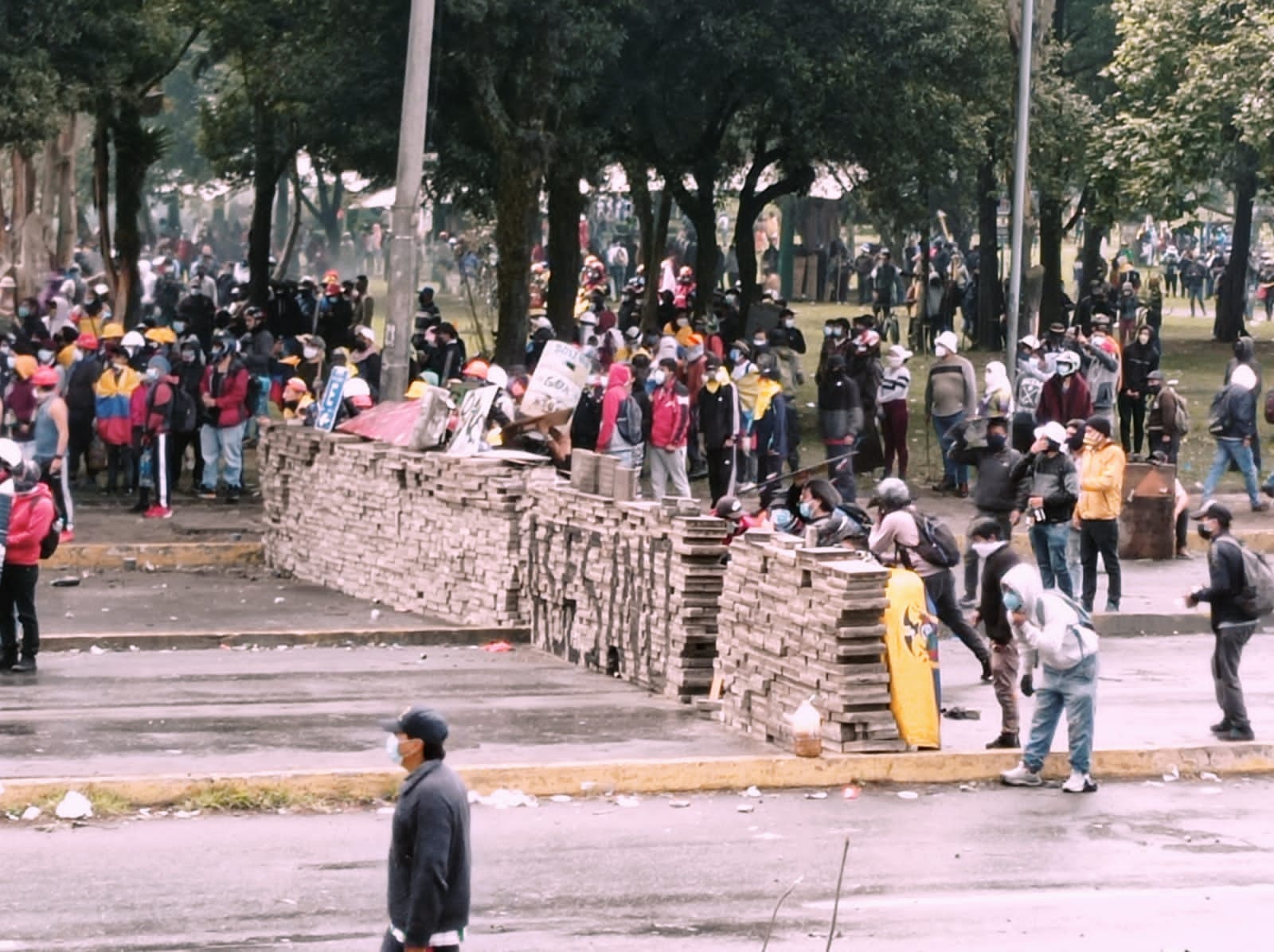 In these two weeks, the Ecuadorian masses have shown great courage and a willingness to fight to the end / Image: Yurak Guaman

Lasso argues that the objective of the movement is to "destabilise democracy", and that there are "coup plotting" intentions. How cynical! His government has collapsed in all opinion polls and he is trying to cling to power by resorting to brute force via the police and army. Faced with a peaceful protest movement, the banker Lasso responds with shrapnel and killings. That is his “democracy”!

The CONAIE leadership still defends itself against these accusations of attempting a "coup" by insisting that it does not want to overthrow the government, and that the fight is just for the 10 points. Leonidas Iza, on Sunday 26 June spoke to the various provinces represented in the movement in Quito, and to all of them he said it clearly:

"We are not here exclusively to throw out Guillermo Lasso, so that they are not confused, we are here for our struggle, for our 10 points, for our demands".

Leonidas Iza argues that if the 10 points are achieved, then the comrades can return to their provinces having achieved something concrete. But, he argues, if it is just a matter of "Lasso out", once this is achieved, people will go back to the provinces with nothing achieved.

This way of presenting things is incorrect. The problem is the following: the government does not want to concede the 10 points on the national strike agenda. Therefore, you can only win the 10 points by overthrowing the government. That would not be “destabilising democracy”, but just the opposite. It is about the majority, workers and peasants, being the ones to decide, and not a banker president who only represents a handful of capitalists at the service of imperialism and the IMF.

The examples in the provinces of Tungurahua and Cotopaxi, where the masses took the road to insurrection, should be followed. On Wednesday, the government of Tungurahua fell, with the seizure of the government building by the protesters, and on Friday24 June the government of Cotopaxi was also taken by the masses, who deposed the governor and elected a "peoples’ governor." That is the way forward. That is real democracy. Not bourgeois democracy but rather the democracy of the exploited, of the workers and peasants. The same strategy should be used in regards to the National Assembly and the Presidency of the Republic.

Despite the arguments and protestations of the CONAIE leadership, the mobilised base continue to insist: “Lasso out”. They raise this demand in the streets, in the assemblies. It is what is written on the shields of the Primera Line (frontline) when they defend the mobilisations against state repression. Bringing down the government would not be a coup, as it is the will of the majority, which has suffered terribly in these days of national strike, under state violence, which has left at least five dead.

What is at stake is the question: who is in charge in Ecuador? Is it the mobilised working people or the banker Lasso who receives instructions from the IMF?

To satisfy the demands of the workers and youth it is necessary to overthrow Lasso, and with him the entire capitalist system he represents. Ecuador is a rich country, rich in natural resources, and in the productive capacity of its men and women, workers and peasants. But that wealth is in the hands of a privileged minority, a capitalist oligarchy submissive to the power of the multinationals, that appropriates it for their own private benefit, while the people suffer hardship and hunger.

By expropriating that parasitic minority, repudiating the debt, and nationalising natural resources, all that wealth could be used to satisfy the needs of the majority, to solve problems of housing, health, education, and hunger. For that, the working class must take power.

An Ecuador in the hands of workers and peasants would be a powerful beacon that would inspire the struggles of class brothers and sisters in Peru, Colombia, Chile, throughout the continent and beyond.