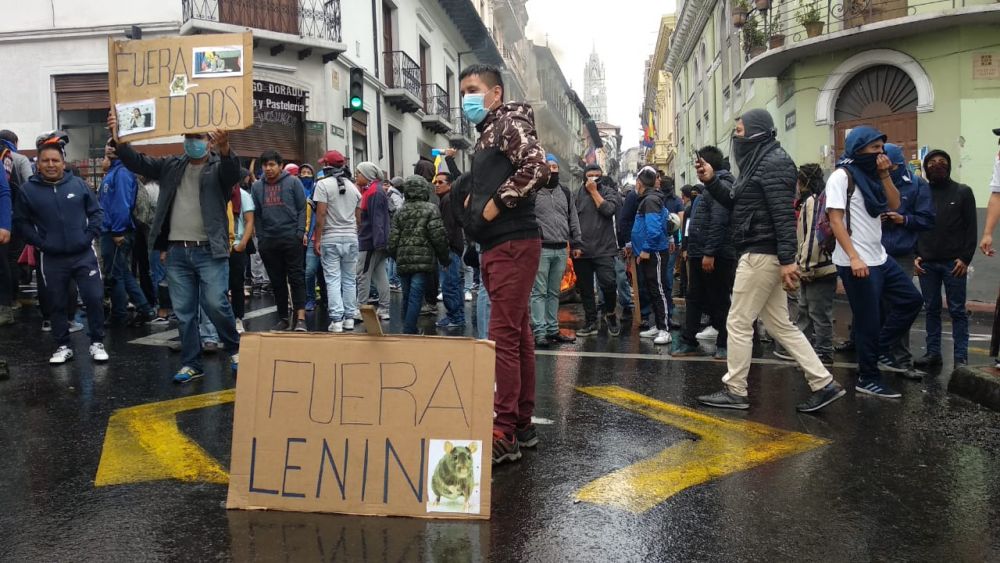 The announcement by the government of Lenín Moreno of a US$2.2bn package of economic counter-reforms on 1 October has led to mass demonstrations and strikes. The government, which fears losing control of the situation, has responded with brutal police repression and yesterday, 3 October, declared a state of emergency for 60 days.

Lenín Moreno’s package includes lifting subsidies on fuel prices, cuts in public spending, an assault on the acquired rights of civil servants and public sector workers (reduction of paid holidays from 30 to 15 days a year, a one-day-of-wages special contribution, and the renewal of temporary contracts with a 20 percent loss in pay), a plan for mass lay-offs in the public sector, an across-the-board counter-reform of employment contracts.

The bulk of the measures announced will hit the workers and poor, and are accompanied by measures that will favour the capitalists. Amongst these are a reduction in tariffs for the importation of capital and consumer goods, the abolition of the advanced payment of corporate taxes and the abolition of the tax on the export of capital.

The brutal package of measures is part of the agreement reached earlier this year with the IMF, in exchange for a US$10bn multilateral loan (of which the IMF will contribute $4.2bn). The loan was negotiated by Finance Minister Ricardo Martínez, who was appointed in May 2018 straight from being the president of business federation Comité Empresarial Ecuatoriano.

Some of the measures (tax and labour reforms) need the approval of Congress, but the abolition of subsidies on fuel came into effect immediately, with an increase in diesel from $1.03 a gallon to $2.27, and gasoline going up from $1.85 a gallon to $2.30. Of course, this measure has provoked mass anger, as it will have a knock-on effect on the prices of mass transportation and consumer goods.

Mass movement against the package

As soon as the measures were announced on Tuesday there were spontaneous demonstrations in the capital Quito against the paquetazo (package). Bus, taxi and truck drivers declared a national stoppage on Thursday and they were joined by student organisations and trade unions calling for demonstrations and strikes. The movement was particularly large in Quito, but affected most of the country’s provinces. In some cities, like in Cuenca and Imbabura, the protesters besieged the regional governorship and attempted to take them over. Mass demonstrations combined with road blockades and barricades. In Guayaquil, there were instances of looting.

The government responded with brutal police repression, firing tear gas at the protesters and then ramming them with armoured vehicles. Over 200 people were arrested during the day in the capital alone. The army came out on the streets in several cities to face off with the protesters. None of that damped the mood of the protesters, who chanted slogans like “Fuera Moreno” (Moreno out), “O se va el paquetazo o se va el gobierno” (Either the package goes, or the government goes”), “El pueblo no se ahueva, carajo” (The people are not afraid!) and marched on the presidential palace.

At an enlarged meeting of the Council of Ministers, there were splits about the way forward. Some suggested suspending the lifting of fuel subsidies in order to placate the protests. Others feared that would only encourage the movement against the whole of the package. The Minister of Finance Martínez threatened to resign if there were any concessions made. The splits at the top revealed the strength of the movement from below.

President Lenín Moreno was supposed to make a national broadcast, which was then delayed and finally cancelled and replaced with a three-minute, pre-recorded video extolling the virtues of the package, saying there was no turning back nor room for any negotiations and warning protestors that they would “face consequences”. The president in fact had fled to Guayaquil, from where he declared a state of emergency (estado de excepción) for 60 days, thus suspending freedom of association and assembly. Clearly, the government was rattled by the size and angry character of the protests and feared, quite rightly, being overthrown.

For today, Friday 4 October, more demonstrations have been called at 4pm and there is talk of a general strike being called for next week. The police have resorted to arresting the leaders of the transport unions in several regions but this has not stopped the movement. The day started with road blockades and paralysis of transport in most regions.

We do not know how far this movement will go. It certainly has the potential to bring down this hated government. One thing is clear, though, the uprising in Ecuador is yet another nail in the coffin of the so-called conservative wave in Latin America, which bourgeois commentators cheered about; and sceptical and cynical “left-wing” intellectuals and academics theorised about. The other nails in the coffin were hammered by the movement of the students and the general strike against Bolsonaro in Brazil, the general strikes and the defeat of Macri in Argentina, the uprising that overthrew the hated governor in Puerto Rico, the mass movement in Honduras against JOH, the ongoing uprising in Haiti against Jovenel Moïse, etc.

Lenín Moreno came to power in 2017, when he won the election as the official candidate of Alianza País, the party of the former president Rafael Correa, and was seen as his successor. During Correa’s presidency, he had taken advantage of high oil prices to carry out social programmes, incurring in the wrath of the oligarchy. Correa had also aligned himself with Venezuela’s Bolivarian Revolution, had broken with the IMF, clashed with US imperialism and Colombia and kicked out the US from the Manta military base.

However, quite quickly it became clear that Moreno had no intention to continue with the same policies as his predecessor, under whom he had served as vice-president. He moved towards implementing a programme of fiscal austerity, introducing cuts in social spending, sacking thousands of public sector workers, etc. He also aligned himself closely with Trump in the US, even before he was elected. The oligarchy – the handful of very wealthy capitalist and landowning families that have ruled Ecuador for the best part of nearly 200 years – gave Moreno full backing in his policies. As part of his realignment with US imperialism, he handed over Julian Assange, who had been given asylum in the Ecuadorian embassy in the UK, and then also Ecuadorian citizenship by the Correa government.

The uprising in Ecuador is a nail in the coffin of the so-called conservative wave in Latin America / Image: fair use

The Ecuadorian workers, peasants and youth have a proud revolutionary tradition and in the last 20 years they have overthrown one government after another through mass uprisings, as they attempted to introduce austerity packages: Abadlá Bucaram in 1997, Jami Mahuad in the revolution in 2000 and Lucio Guiterrez in 2005. The masses entered on the scene again in 2007 through the election of Rafael Correa and again in 2010 when they defeated an attempt by the oligarchy to carry out a coup against him. In some of these cases (Bucaram and Gutierrez), governments that were elected with mass popular support by the workers and peasants seeking fundamental change were then removed by popular insurrections when they betrayed them. It is possible that Lenín Moreno will follow the same path.

The current movement against Lenín Moreno will certainly benefit former president Rafael Correa and his Revolución Ciudadana party and might bring him back to power. If that is the case there is a need to learn the lessons from the experience of the Correa government. While this was in the main a progressive government carrying out social programmes, it never fundamentally challenged the economic power of the capitalist oligarchy. Thus, when the price of oil started to fall in 2014, the country’s economy was severely hit. Unemployment and poverty increased and the popularity of the government started to fall.

The masses of workers and peasants in Ecuador have to arm themselves with a program which goes beyond the limitations of the rotten and dependent capitalist system. Only with the expropriation of the wealth of the handful of very powerful families which control the country’s economy can the problems facing the Ecuadorean workers and peasants be solved. While it was temporarily possible to apply policies of wealth redistribution within the limits of capitalism while oil prices were high, this is no longer possible, particularly at a time when world capitalism is moving rapidly towards a new recession. The only way forward for workers and peasants in Ecuador is socialism.

It is clear that the ruling class will try to put down the current protest movement through repression. If that fails they might attempt to make temporary concessions in order to defuse the movement. If the movement continues then they might decide to remove Lenín Moreno and replace him with another bourgeois politician who will carry out the same policies.

The movement of workers, peasants and youth needs to gather around the demands of “Down with the package and down with Lenín”. These can only be achieved by moving towards a general strike that paralyses the country. Action committees should be set up in every factory, workplace, high school and faculty, and in all peasant communities. Only the independent action of the working class can bring a solution to the crisis in the benefit of working people.

Down with the package! Down with Lenín Moreno!

Workers and peasants, trust only your own forces!