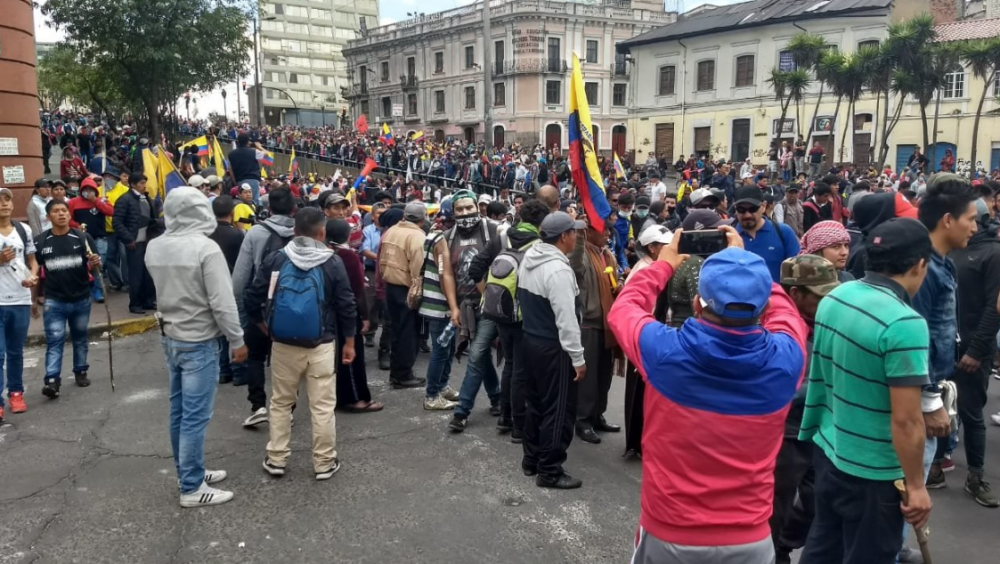 After twelve days of heroic struggle by the indigenous working-class masses of Ecuador, the first victory of the movement was achieved. At a negotiation between the indigenous representatives, the UN in Ecuador, the Ecuadorian Episcopal Conference and government representatives, it was agreed to repeal Decree 883 (the IMF funded austerity package). The government has now promised to draw up a new decree, however it was not clarified what terms it would include. A commission has been set up to discuss the new decree this week.

CONAIE (Confederation of Indigenous Nationalities in Ecuador) has said not to declare victory until the new agreement is finished:

“The public agreement with president Lenín Moreno was to repeal Decree 883. Now a commission is working on the future agreement to replace it. We celebrate a victory but this does not end until a new agreement is fully realised.”

We take the repeal of the decree as a decisive victory for the working people of Ecuador, a victory for the methods of the working class (the strike and mass mobilisations) and a confirmation that traditional methods of class struggle are more applicable today than ever, and are most effective when confronting the bourgeois state.

However, we warn that forcing the repeal of the decree is no guarantee. The rest of the reform package is still in place and the letter of intent signed with the IMF has not been repealed. Also, the government of Lenín Moreno, a servant of the IMF and the United States, remains at the head of the state apparatus, which continues to pose a threat to the interests of the working class.

The UN has intervened in Ecuador in an attempt to negotiate a solution that would stop the movement, which was advancing rapidly, from defying bourgeois power, by taking down Decree 883 (which eliminated fuel subsidies). The UN considered this an effective concession to demobilise the masses, allowing them to initiate an offensive against the main protest leaders, thus beheading the movement and reinforcing the authority of the vile government of Moreno. As we write this article, we have received news that some protest leaders are being detained by the state apparatus.

“Today they entered my house at dawn and knocked down the door while I was sleeping. They have detained me without evidence. Being the opposition in a democracy cannot be a crime. It is not a democracy when political opponents are persecuted this way,” said the feminist Paola Pabon in a tweet. A video of the arrest has been posted on her Facebook account. This exposes the regime's strategy.

Moreno’s government remains intact. During the negotiation, some of the requests that the people demanded included the resignation of the Minister of the Interior, María Paula Romo and the Defence Minister, Oswaldo Jarrín whom the people identify as responsible for the brutal repression of a protest that left seven dead and thousands injured. This demand has still not been fulfilled.

As long as all the demands of the movement are not met, the people must be willing to stand up again. The leaders of the movement must not only abide by the demands against the government ministers, but also take on a demand that became popular among the protests: Lenín Moreno Out! Down with his servile government and all the IMF measures! These must be the main slogans of the movement now. The masses showed the real power they have in their hands, paralysing the entire country and beginning to show signs of a parallel popular government.

Far from containing the revolutionary energy of the masses, the movement must be strengthened. For decades, the situation in Ecuador has demonstrated that changing one government for another within a bourgeois framework only leads to worse crises. We must establish a People’s Assembly that can end the capitalist system: the main cause of all the ills of the working class.

The negotiation with the government will not guarantee anything for the working masses. The power of the People's Assembly must be extended, moving from bourgeois democracy to worker-peasant democracy. This must be a government that truly represents the working people, which extends to all corners of the country, encouraging assemblies throughout the territory by electing representative delegates – in factories, universities, in all possible regions – to take the reins of society into the hands of the oppressed and exploited.

This could be the first step to really changing the living conditions of the poorest, followed by expropriating the oil infrastructure and putting big business at the service of the people to end poverty and the oppression of capitalism. The resistance of the bourgeoisie and imperialism can be fought by extending the indigenous guard throughout the country and organising a workers’ militia of thousands of committed combatants, something that has already been done, but on an even greater scale. The path for the defence of the people has been traced in these 12 days, it must now be deepened.

The mass mobilisations of the Ecuadorian people have moved the entire world. The movement must make use of this international solidarity and call for the unification of the working class against capitalism. This is the only effective way to conquer power. The fight must continue. The first episode of this war has been a victory for the people, but there will be more battles that we must continue to win.

We extend our solidarity with the Ecuadorian people and their heroic struggle – that is also ours – and we urge the end of Lenín Moreno's government. Expel the IMF from the country and all the foreign capital from Ecuadorian territories.

Down with the government of Lenín Moreno!

Kick out foreign capital from Ecuador!

For a People’s Assembly!