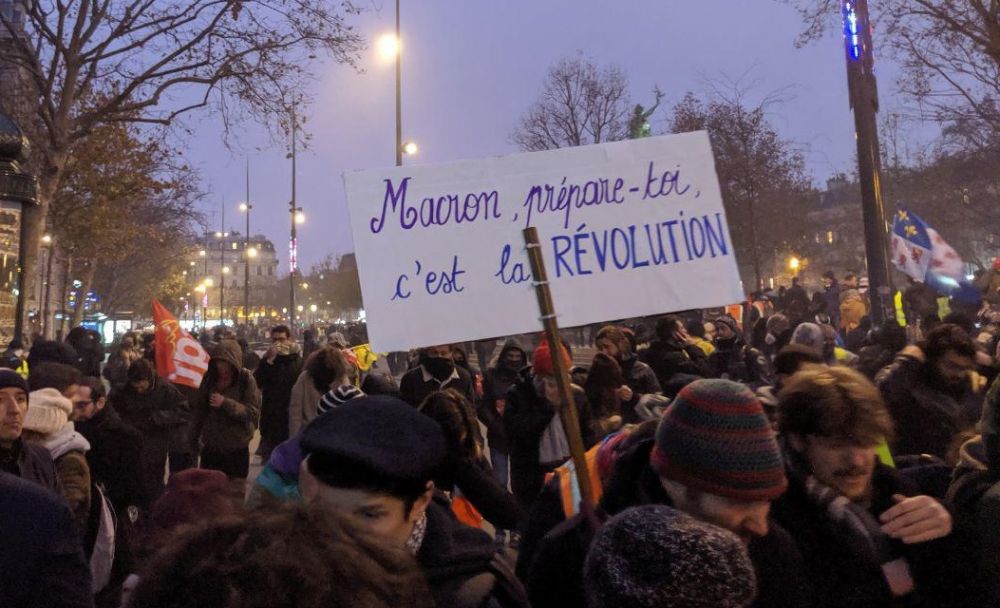 The 5 December strike mobilised a number of demonstrators not seen in France since the struggles of autumn 2010 (against the Sarkozy government’s pension reform). While we do not know the exact number of striking workers, it is likely that no interprofessional strike has had such a big impact on France’s economy since December 1995.

The government knows and dreads this, which is why they are intensifying their divisive manoeuvres. However, because of the effect of the 5 December strikes, their divide-and-conquer tactics are forcing the government to expose their own lies. For example, while they promise to increase teachers’ salaries, in order to “compensate” the predicted (and drastic) fall in their pensions, they are de facto admitting the very thing that they have been denying since the beginning: that with the “points system”, pensions will fall massively. And it’s not just teachers’ pensions: pensions will fall for the overwhelming majority of the population. Almost no one believes the government’s clumsy lie that eliminating special regimes will allow them to raise the minimum pension.

Edouard Philippe, the Prime Minister, declared that he would unveil the proposed legislation in its entirety on Wednesday 11 December. Why hasn’t the law been presented until now, if it is as “fair” as he claims it is? Because the government wanted to get a sense of the level of mobilisation first – and start manoeuvring to neutralise the strike in the most militant sectors. To the teachers (who are heavily mobilised) he vaguely promises wage increases. To the transport workers in RATP (the Parisian public transport company) and SNCF (the French railway company), he promises a “gradual transition” to the new pensions system. And if this doesn’t work, if the teachers and the rail workers don’t go back to work, the government will say to the masses: “Look: we made serious concessions, but the teachers and rail workers are still being unreasonable and trying to punish you, the sensible people”.

However, the vast majority of these “sensible people” support the strike at this stage. In fact, many of them could join the strike in the coming days. In this case, the government’s posturing would come down like a house of cards. The challenge our side faces now is to get to that point as soon as possible, as the most militant sectors, who are active now, cannot hold on indefinitely without support; whereas the government will only back down if faced with a movement of indefinite strikes that keeps expanding to new sectors.

The aims of the movement

5 December was characterised by a militant mood but also a strong political radicalism. Many demonstrators were against not only the pensions reform, but the entirety of Macron’s programme. As an extension of the yellow vests movement, whose key slogan was “Macron, démission! (Macron, resign!)”, the 5 December strikes largely went beyond the stated aim of the trade union leaders, which was for the government to withdraw the pensions reform. A woman sporting a yellow vest perfectly summed up the point of view of many of the striking workers: “I am fighting for my pension, yes, of course. But I am fighting first and foremost to have a dignified life before I retire.”

In two sentences, this worker gives us the real measure of what’s at stake in the current struggle. The trade union leaders and left-wing parties would do well to take inspiration from this, rather than limiting the objectives of the movement to the scrapping of the pensions reform.

The necessity to mobilise on the basis of a broader programme is so obvious, it is such a clear consequence of the social and political situation, that Philippe Martinez, the General Secretary of the CGT, constantly goes beyond the narrow limits that he himself has set for this movement. For example, he explains every day that generalised wage increases would guarantee the financial viability of the pensions system. It is true that we must fight for wage increases, not only to fund pensions but also especially to protect workers’ purchasing power. But then why not add “wage increases” to the list of the movement’s demands? Why limit the demands to the scrapping of the pensions reform?

This is because the CGT leadership proceed in “stages”. They demand the withdrawal of the government’s pension reform as a first step towards the “negotiation” of a progressive reform, a reform that would increase the level of pensions and decrease the age of retirement – thanks to a generalised wage increase.

The problem is that Macron will never negotiate anything of the sort. His goal is to drastically reduce the level of public sector pensions, and by doing this, widen the private pensions market. He will not negotiate anything other than this, for he is at the beck and call of the capitalist class. Martinez’s proposed pension reform implies making a large dent in the profits of the capitalists, which is the exact opposite of Macron’s entire agenda.

Instead of postponing a progressive pensions reform and generalised wage increases to an impossible “negotiation” with Macron, the CGT leaders should base the strike movement on a platform that sums up the demands of the workers in struggle: wage increases, mass hiring of public sector workers, investment in public services, scrapping of the Lois travail, construction of social housing on a mass scale, pension increases, lowering of the age of retirement, etc. Producing such a programme would not be difficult: it would suffice to have listened to what the striking workers were saying on 5 December, and what they have been saying for the last few years.

Once again, Macron will never approve of such a programme. All the workers on strike have understood this. Therefore, the real prerequisite of a progressive political programme is not the withdrawal of the pensions reform: it is the overthrow of the Macron government. This political goal should top off the list of demands of the current movement. Those who think this would damage the mobilisation have understood nothing of the mood of the masses, of the yellow vests movement, and of the political significance of the 5 December. To their hollow arguments, we oppose the words of the worker we already quoted: “I am fighting for my pension, yes, of course. But I am fighting first and foremost to have a dignified life before I retire.”