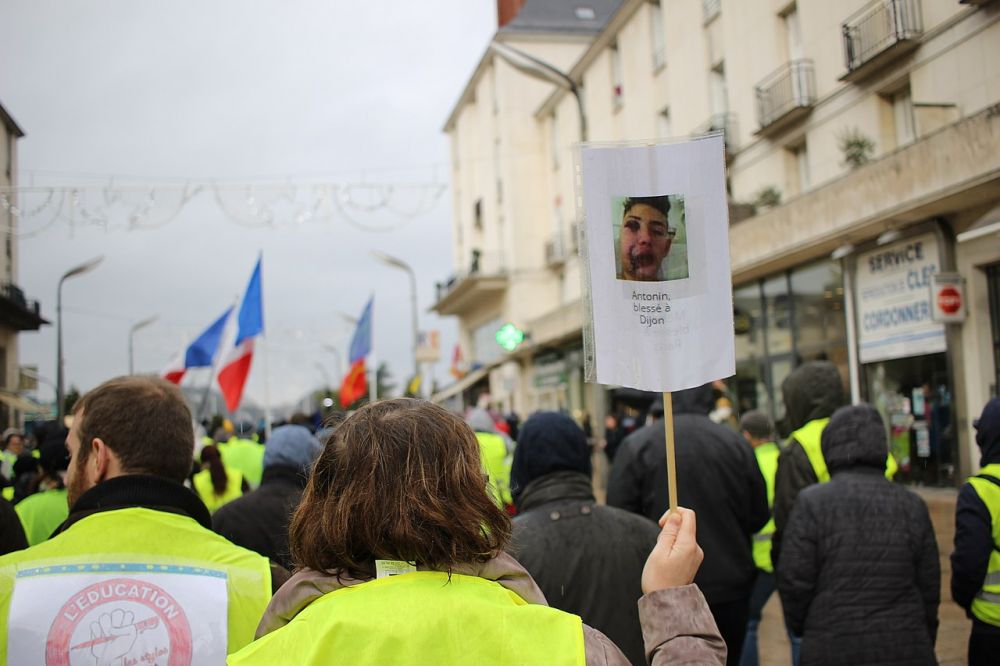 The yellow vests movement strikes fear into its opponents, which incurs their aggression. In addition to violent repression (2,000 people have been wounded, 18 blinded and five have had their hands torn off), the government has responded with an unprecedented intensity of judicial repression.

A statement on 22 November 2018 by the Minister of Justice, Nicole Belloubet, granted the state carte blanche to conduct searches and arrests of anyone with the merest association with or resemblance to a gilet jaune.

Read the original in French, published 11 March at Révolution |

The scale of the judicial repression is stunning. Over four months of mobilisation, the Ministry of the Interior has announced that more than 8,000 people have been taken into police custody in association with the movement, and there have been 1,800 convictions. There have been mass arrests by the police, acting on the orders of the Ministry of Justice. The mere act of wearing goggles or possessing saline (which can be used to treat the effects of teargas) is enough to land someone in custody. The Syndicat des Avocats de France (SAF) has denounced the almost systematic absence of proper police reports. Instead, the gendarmes simply fill out a "marksheet" (a kind of multiple-choice questionnaire) to process the accused, which is often sloppy and incomplete. 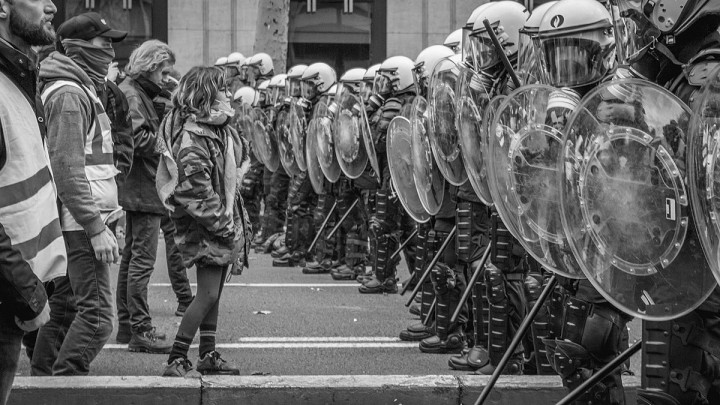 The gilets jaunes have endured repression at the hands of the courts and Macron's riot police. Thousands have been arrested and thousands more wounded / Image: Pelle De Brabander

In Paris, the number of immediate appearances before a court has doubled since the beginning of the movement. The High Court of Paris is like a factory where judgments are dispensed day and night, at an infernal rate. The reasons for the convictions are often misleading, in particular for "participation in a group for the preparation of violence and destruction". This surreal "offence" allows anyone on the scene of the protest to be condemned if there has been a clash with the police.

Le Monde Diplomatique has reported the story of a Breton worker who was stopped in a carpark, far from a protest, and because the trunk of his car contained protective equipment (mask and glasses) he was given a six-month suspended sentence!

On the other hand, the police are free to attack and maim protesters with impunity. Consider the case of Didier Andrieux, the commissioner who beat several people during the eighth week of protests in Toulon. He has faced no legal proceedings. The so-called "IGPN Investigations" against police misconduct amount to nothing.

Making an example of the gilets jaunes

Sentences against the gilets jaunes are very heavy. In addition to high fines, prison sentences are handed down. On 316 occasions, warrants of incarceration have been recorded.

From 1995 to 2018, 33 sentences of prohibition from demonstrations were pronounced. In the last four months, several hundred yellow vests have been banned from demonstrating. A number of protesters were also deprived of their "civil rights", including the right to vote.

On television, journalists and experts are calling for the strongest action against the "seditious thugs" arrested on demonstrations. But, in the defendants’ box, we see no thugs: only casual workers, farm workers, transport workers and students.

The sentences handed down have a political function. The judicial repression aims at intimidating opponents of the government and thinning out the demonstrations. At the same time, the right to demonstrate is de facto undermined.

We have said it before and we repeat it: faced with the extreme brutality of the police and judicial repression against the movement of yellow vests, the response of the union leadership is not at all up to par.

The leadership of the most militant trade union confederation, the CGT, has been limited to vague protests. But it has taken no serious action, let alone a 24-hour general strike, which would be a good start. Weakness invites aggression. If it finds that the repression of yellow vests does not provoke any reaction from the unions, the government will always go further. Through the yellow vests, the entire working class is targeted.

Down with the judicial repression of yellow vests!

For a 24-hour general strike!