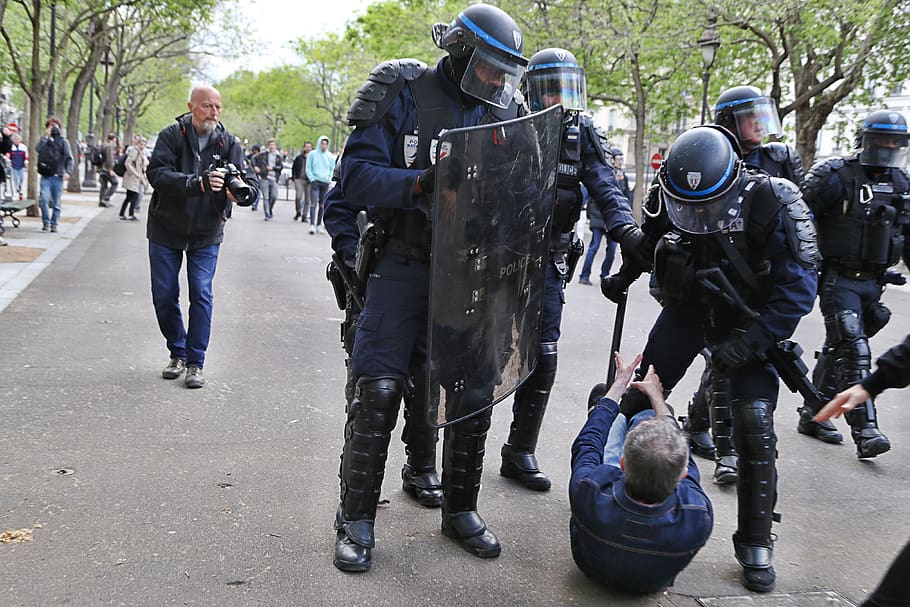 The images of the beating of Michel Zecler (a black music producer) on 21 November and the huge success of the “freedom marches” the following Saturday have exposed once again the thoroughly reactionary, racist nature of the police, and accentuated the French government crisis.

Macron publicly expressed his “shame”, demanded an “exemplary police force” and let us know that the Elysée has contacted Michel Zecler to assure him of its friendship. In short, the head of state is paddling as hard as possible to move on as soon as possible.

Under pressure, the Interior Minister Gerald Darmanin said “there might be structural problems” in the police. There might be? In his capacity as “the first cop in France”, Darmanin knows very well what he is talking about. This “might be” does not express genuine doubt; it aims to skirt around the issue, and spare the reactionary police unions, who see the whole affair as “a few bad apples” who “must be punished”, but not too harshly. They hope this will be the end of it.

France is systemically racist. Despite what he says, Macron is not “very shocked.”

It is not certain that the government's manoeuvres will be enough to relieve the pressure. A video of a new police “blunder” (and there is no shortage of such footage) could ignite the powder keg. On the other hand, some within the ranks of the police itself might break the code of silence that covers their real role and behaviour. Finally, attempts to pass the Global Security Law (including Article 24, which aims to make filming and identifying police officers illegal) have still not been abandoned. New events are planned for this Saturday. They will be fueled by the general anger that is mounting in the country against all government policy.

The “freedom marches” have signalled that a growing number of young people and workers are ready to engage in a massive struggle. The left and the trade union movement should not “calm things down", as we sometimes hear, but instead, strive to develop a bigger and better-organised mobilisation. We must demand the abandonment of the entire Global Security Law, and not just Article 24, because the other articles are no better. Along with the mass protests, a 24-hour general strike should be announced and seriously prepared for.

By forcing the government to abandon this anti-democratic law, the labour movement would deal it a severe blow. This would strengthen our class's confidence in its own power. This would be an important step in the development of struggles against government policy and the social consequences of the crisis.

Nature of the police

At the same time, the position of the workers’ movement towards the police needs to be clarified. Leaders of the reformist left point out that there is a “structural problem” in the police. This is far too vague. The police are itself a well-defined “structure”, or rather a well-defined institution, which is part of the bourgeois state apparatus. As Marx explained, the bourgeois state consists, in the final analysis, of “special detachments of armed men” who defend capitalist relations of production.

To get a concrete idea, just think of the role of the police in the face of the yellow vests movement: the massive and explosive movement that was destabilising the French capitalist regime in 2018-9. By brutally repressing the yellow vests, the police did not show evidence of a “structural problem”, on the contrary, they were carrying out their most fundamental mission, in accordance with their place in the bourgeois state apparatus. The brutality of the repression was commensurate with the panic of the government and the ruling class.

#France | During the past week, the controversy surrounding the global security bill increased in intensity due to protests over the brutal attack by four police officers on music producer Michel Zecler. pic.twitter.com/d1poBs0b13

Therefore, to claim that there could be, under capitalism, a “good”, “democratic” and “respectful” police is to completely ignore the fundamental role of the police and their class character. Instead of sowing such illusions in the minds of the workers, the leaders of the workers' movement should explain the following: as long as the bourgeoisie is in power, as long as a small minority of the population exploits the vast majority, the exploiting minority will need a state – that is to say, “special detachments of armed men” – to defend this power against the struggles and revolts of the exploited, oppressed and impoverished masses.

Moreover, as long as this is the case, the police will inevitably include in their ranks a significant number of arch-reactionary elements: racist and hostile to the workers' movement, who will not only repress the workers with zeal but will also take advantage of their power, authority weapons to engage in racist “blunders”, provocations and attacks, all with the consent of their superiors – and the benevolence of the judicial system, which protects the police for protecting the state as a whole.