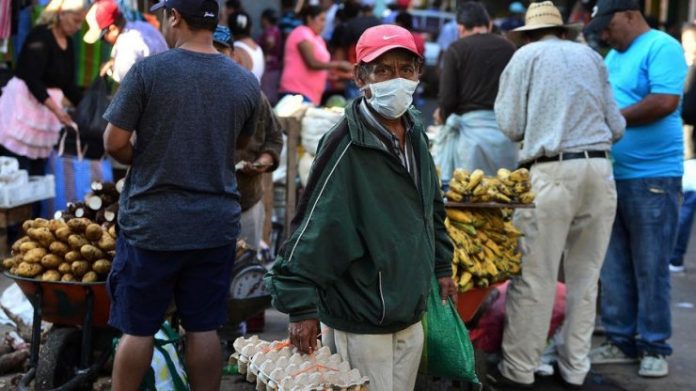 The first Honduran cases of coronavirus were confirmed in the early hours of Wednesday, 11 March. Just under a month later, infections in the country already number in the hundreds. The coronavirus is spreading so rapidly that the government has adopted "emergency measures" to try and contain the pandemic. However, the state is not prioritising the people’s wellbeing. As a result, the measures taken are insufficient and largely inapplicable to most Hondurans' lives.

Read the original in Spanish here

Every day, we are bombarded with messages that the pandemic strikes both rich and poor. National government broadcasts maintain that the coronavirus does not differentiate between social classes. This is absurd. A stark example of the lies of President Juan Orlando Hernández and his murderous dictatorship is the #StayAtHome campaign. Despite the efforts that the working class make to avoid contagion this campaign is simply a bad joke given that most people work in the informal economy and live on the breadline.

Government measures are out of touch with reality

Hundreds of thousands of Honduran workers have “informal” employment and earn their living day by day, requiring them to leave their homes to do so. From the moment the government declared quarantine measures these workers had to worry about how they were going to make a living and survive. To talk to these people about staying at home for 21 days without giving them financial support is simply an insult. According to the Honduran Secretary of Labour, only 30 percent of the Honduran population have formal jobs, while the remaining 70 percent are considered informal workers.

"Wash your hands constantly," say the dictatorship and its media. What they do not say is that many Hondurans do not have access to clean drinking water. Many of those who do have clean drinking water can get only a tiny amount for a couple of hours in the morning, due to old and damaged plumbing as well as hoarding. Official figures do not reflect this limited access to potable water.

In Honduras’ rural areas, one in five people live in extreme poverty, on less than $1.90 a day. To advise social distancing to peasants who move from town to town in public buses or pick-up trucks to work or sell their products in the squares and markets is sheer nonsense. In the end, hunger will force them to leave their homes: they prefer the risk of contracting the virus to staying at home, hoping for a miracle, and starving.

Coronavirus is spreading rapidly, however, the state's response is not prioritising the people’s wellbeing / Image: US Department of State

Although poverty is more severe in rural areas, the situation in the cities is no different. The same study indicates that in urban areas, more than half of all households (55 percent) are in poverty. Again and again, the pressures of capitalism strike at people’s dignity, and that is why they are forced to leave their homes to risk their lives for a livelihood.

In 2014, the Honduran National Institute of Statistics reported that more than 182,000 residents of the nation’s capital live in extreme poverty. It is certain that this number has greatly increased. How do you explain to all these people that they should not leave their homes? That decree is meaningless to them. Only when we are able to provide the necessary support to these people can we explain social distancing to them. In the meantime, no national curfew can make a real difference.

To all this, we have to add the people who literally live on the street. There is no official figure or reliable study, but according to José Guadalupe Ruelas, director of Casa Alianza (a charity and NGO whose aims are the defence and rehabilitation of street children), the number of children who live on the streets of San Pedro Sula and Tegucigalpa is 15,000. This is the number for only those two cities, but it gives us a good indication of how bad things are across the country. It is certain that the number of homeless adults is similarly appalling.

What does Izquierda Marxist (the Marxist Left) propose?

Those who have already lost their jobs or are working informally will be further affected by this crisis. We call for the state to pay them the equivalent of their full salary. However, we oppose financing this measure through higher public debt that will ultimately be paid for by the working class in the form of austerity and tax increases. On the contrary, we demand the expropriation of the parasitic banks and speculative companies.

Most likely, they will tell us that there is no money. However, history tells us that they can always find money to fill the pockets of the wealthy. Over the last decade, the workers were hit with austerity measures while bankers received generous donations of cash. In fact, the Hernández government has approved a new injection of millions into cooperatives and the banking system. Why was this money not given to the poor instead of the usual suspects? The bankers who now rub their hands as they receive our money are the same ones who destroyed the country's economy. It beggars belief that large sums of public money are being deposited into the war chests of large private companies while millions of workers live in fear and poverty.

The state will insist over and over again that the costs of the crisis be borne by the workers. All the upcoming loans will be paid for with the sweat and blood of the working class when their costs could easily be covered by the sums already stolen from us by the bourgeoisie. In 2015, for example, the government did not receive 57 percent of total sales tax (ISV) due. This amounts to 18 billion lempiras (more than 725 million USD). Companies and shopping centers collected it from purchasers, but simply decided not to deliver it to the government. Every year employers evade all kinds of taxes, not just the ISV. 18 billion lempiras is more than double what was stolen from the IHSS (Honduran Social Security Institute) and almost double the sum approved – allegedly to fight the coronavirus crisis – by Honduran Congress under the new Special Law on Economic Acceleration and Social Protection.

The government has called for corporate charity, gently asking the bourgeoisie ro show solidarity with the oppressed. We know that this will not be the end of the barbarism that plagues the daily lives of the majority. Philanthropy is a short-lived phenomenon that, as soon as it represents losses for the bourgeoisie, falls apart faster than a sandcastle hit by a great wave. The problem is vast, and we have to tell the truth: solving it requires revolutionary means.

If the government really cares about people who live on the streets, it should create public shelters to assist the homeless who sleep under bridges and McDonalds windows, relentlessly exposed to the virus.

To reiterate: reproaching the poor who crowd local markets looking for food is absurd. They cannot be lectured on the need to isolate themselves when the result would be starvation at home. What the corporate media and the rich fail to acknowledge is that this crisis will strike savagely at the poor, who will be lucky if they make it through with their lives. Our role is to demand living conditions that allow the poor to remain at home in safety. However, the modern state, whose job it is to care for the bourgeoisie and not the poor, will not do this. So we must build a state run by and for the working class. Announcing curfews on national networks and talking about being disciplined is not enough: it will never be enough in a country devastated by the misery of capitalism.