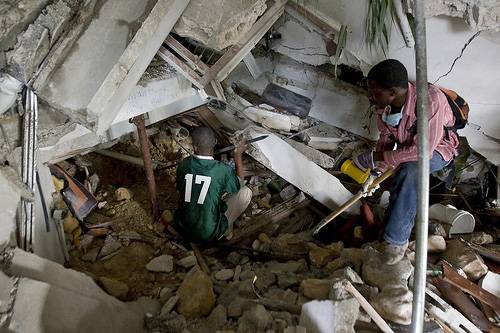 There is a manmade element to the catastrophe confronting Haitians. The country doesn’t just happen to be poor; it has been made poor and kept poor. Haiti is the poorest country in the Western hemisphere, with the worst infrastructure and a people most vulnerable to disaster and disease, because of the machinations of imperialism. Although the earthquake could not be avoided, the scale of death and destruction clearly could have been avoided.

You would have to have a heart of stone not to be moved by the scenes of horror from Haiti. But we also need take this opportunity to think, and consider how we can prevent catastrophes having such a disastrous effect upon the lives of human beings now and in the future.

We are told over and over again that the earthquake was a natural disaster, an ‘act of god’. Of course in one sense it was.

We are told that the ‘international community’ is doing its best. And we know that good, brave people from many countries are working to the absolute limit and putting their lives at risk to save lives and bring solace to the survivors.

We know that the would-be rescuers can’t just rush around Haiti bringing emergency relief supplies to those that need it. Apart from the earthquake damage, the infrastructure in Haiti was already hopelessly inadequate. The airport couldn’t cope. The roads are impassable.

Haiti is indeed a country stalked by earthquakes and hurricanes. The infrastructure before the earthquake had already been shredded by a series of hurricanes. But Cuba next door is prey to the same natural hazards. As a result of the wave of recent disasters just 4 people have died there. Cuba is not a hapless victim of world capitalism. The Cubans make plans to preserve the lives of their citizens against natural disasters.

There is a manmade element to the catastrophe confronting Haitians. The country doesn’t just happen to be poor; it has been made poor and kept poor. Haiti is the poorest country in the Western hemisphere, with the worst infrastructure and a people most vulnerable to disaster and disease, because of the machinations of imperialism.

Haiti hasn’t always been seen as poor. In the eighteenth century it was perceived as a source of immense wealth. As a French colony it produced 60% of all the coffee and 40% of the sugar consumed in Europe. It produced more wealth than all the British-owned West Indian islands. It was the ‘Pearl of the Antilles’.

This wealth came from slavery. The black slaves rose up during the French Revolution. Under the leadership of Toussaint-l’Ouverture they waged the only successful slave rebellion in the world. They expelled all the colonial armies and proclaimed independence in 1804. 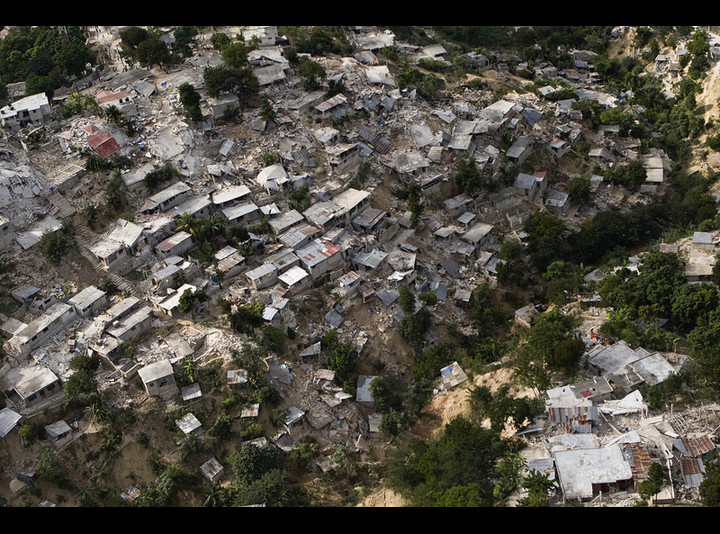 A poor neighbourhood in Port au Prince shows the immense damage after the earthquake Like Cuba more than 150 years later, the Haitians were confronted with a total embargo. In order to break out of the enforced isolation, the Haitian government was forced to promise reparations of 150m gold francs to the French. They were compensating the French for the ‘crime’ of rising up as slaves and thus depriving them of their human property! Repayment of reparations lasted from 1825 to 1947. By 1900 80% of government revenue was going straight out of the country as interest payments. No wonder there was no money left to build up the infrastructure.

What the Haitian government had done in effect was to replace slavery with debt bondage imposed on the whole nation. That is the situation that remains to the present day. A series of compliant rulers administered the country on behalf of imperialism, and helped themselves to a portion of the country’s wealth in return. When they were not subservient enough, imperialism intervened directly. The USA occupied the whole country from 1915-34.

There have been movements against imperialism. Jean-Bertrand Aristide was elected on a populist programme in 1990. There was a coup against him the following year. He was elected again in 2000, and doubled the minimum wage to $2 a day. In 2004 he was kidnapped in another coup, backed by the USA and France. This is a remarkably similar sequence of events to those imposed on the left-wing leader Mel Zelaya. Honduras has suffered an identikit coup to the one imposed on Haiti.

Aristide remains in exile. The United Nations Stabilisation Mission has been in the country ever since. They have a monopoly of effective armed force. There is no Haitian army. When somebody asks you ‘Why doesn’t the Haitian government do something?’ remember, the UN, is the real government.

Everybody knows that Haiti is in an earthquake zone. So when you ask: why is Haiti in such a mess? Why aren’t the buildings constructed to earthquake-proof standards? Why has nobody improved the infrastructure? Why were there no effective emergency plans? These questions should be referred to the UN as the representative of world imperialism in Haiti. These are legitimate questions. The answer to them is that, until the grip of imperialism is relinquished, for the common people of Haiti suffering will remain a way of life. The people of Haiti need real aid. They need to be part of a movement to kick out imperialism and join hands with a socialist federation of the Caribbean as part of a socialist Americas.