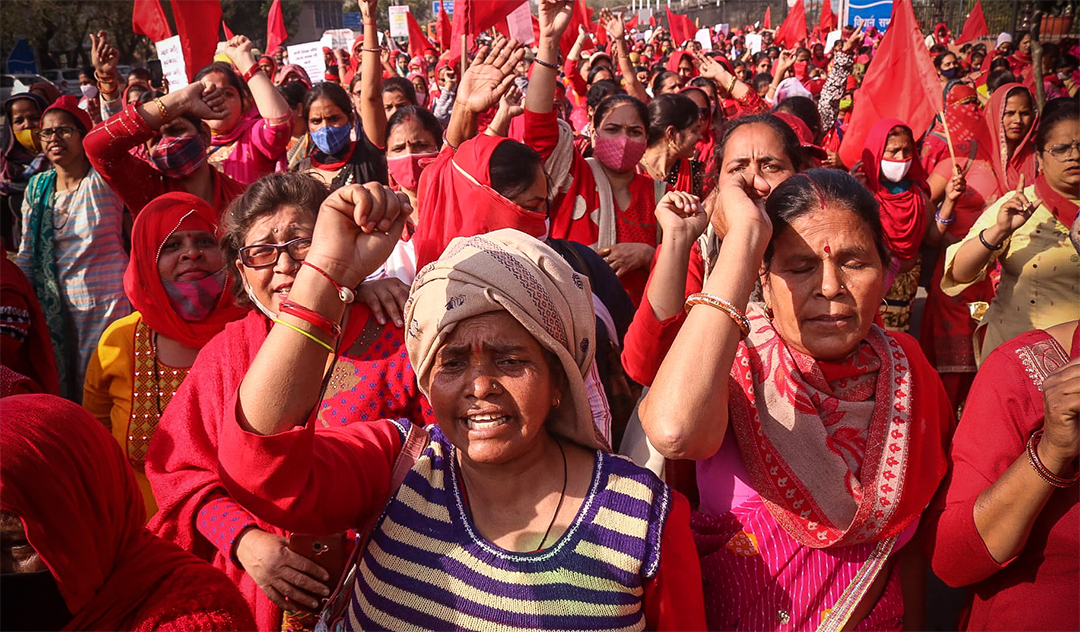 The Delhi State Anganwadi Workers and Helpers Union (DSAWHU) have been on indefinite strike since 31 January against the unbearable working conditions and low pay of their members. Their struggle is an example to the labour movement across India.

Despite the important role they play, these workers and helpers are not given employee status. They are entitled to honorariums and not wages. The average wage across India is Rs 31,900. Even factoring in the high levels of inequality that distort these figures, anganwadi workers and helpers receive a pittance of Rs 3,500 and 2,500 per month respectively, in addition to which different state governments contribute a varying amount.

Currently, in Delhi, anganwadi workers and helpers earn Rs 9,698 and Rs 4,839 per month respectively. The workers and helpers are eligible for 20 holidays in a year. However, with every holiday they take, it is alleged that a sum is deducted from their already low pay.

One DSAWHU member, Rajni, said in an interview:

“There are no specific work hours as well. We are supposed to work from 9 am to 2 pm. However, even at 12 at night, our supervisor calls us and demands the work to be done. At the centres, they deliberately get our food late and make us stay till 5 pm.”

“Even the phones given by the Kejriwal government in 2017-18 do not even function properly. Most of us do not even have cell phones, yet, we have to spend from our own pockets for internet charges because we are required to update data on the Poshan Tracker app. Forget about reimbursements of any kind…. Not even a single mask was given to us. From our convenience fees to our savings, that was spent on aiding others, nothing ever was reimbursed.”

The DSAWHU have presented the following demands:

Shortly after the indefinite strike was announced by DSAWHU, the workers and helpers organised a sit-in protest outside the residence of Aam Aadmi Party (AAP) Delhi Chief Minister Arvind Kejriwal’s residence.

DSAWHU has organised mass rallies and marches through Delhi. These were attended by thousands of DSAWHU members.

As the indefinite strike action progressed, the workers and helpers have set up a creche to look after their children. On 13 February, a medical camp was organised by the Progressive Doctors’ League near the Kejriwal residence, under the leadership of the DSAWHU.

This kind of solidarity and militant action is a lesson to the entire Indian labour movement, which must be built upon. The determination of this indefinite strike by extremely exploited and oppressed layers of the working class stands in stark contrast to the narrow horizons of the main union confederation leaders, whose planned two-day general strike last week saw a comparatively low turnout across the country (50 million against an expected 200 million).

This disappointing turnout can be explained in part by the union leaders limiting themselves to a two-day action as a release valve for the frustrations of the working class. Following similar, much larger national general strikes in recent years, which produced no results, the workers were not prepared to waste their time with this kind of symbolic action.

What is needed is an indefinite strike with the explicit goal of bringing down the rotten Modi regime. The main unions should follow the example of the militant methods showcased by the anganwadi workers and helpers.

Unfortunately, it seems the trade union tops are more interested in limiting the scope of this struggle and stitching up deals with the bosses. The Centre of Indian Trade Unions (CITU) has attempted to broker a rotten deal with the authorities, via its affiliated union, Delhi Anganwadi Workers’ and Helpers’ Union (DAWHU). The DAWHU is not to be confused with the DSAWHU (which is leading the indefinite strike). The DSAWHU has rightly denounced the open treachery of the CITU and CITU-affiliated organisations.

“We want to say once again that any fake ‘compromise’ with the Kejriwal government, with any broker or fake union, will be rejected by Delhi's anganwadi personnel. Delhi State Anganwadi Workers and Helpers Union is the only union that represents 22000 Anganwari workers and their interests. Any conspiracy to 'bypass' our union will see very heavy consequences for the Kejriwal government.”

The Indian state forces have also shown their repulsive, reactionary character in the course of this struggle. According to a report by DSAWHU:

“Delhi police misbehaved with women during ‘Khabardar rally’ [Beware rally], organised by anganwadi workers on 11 February 2022. Delhi police showed their barbaric face once again to stop the peaceful rally of women before it even started. Male policemen abused struggling women and dragged them into the streets, causing serious injuries to several women. This anti-women face of the Delhi police has once again been exposed before everyone. These policemen, who have a mentality of considering women as mere footwear, attacked them, but thousands of women came to the streets, raising their slogans in loud voices. Despite this brutal police oppression, the women's enthusiasm has not decreased, and they are sticking to their demands with the same energy.”

On 15 March, these brave women workers were again assaulted by the police. Many were beaten and one woman worker was left unconscious in the course of a peaceful demonstration.

The police are on the side of the anti-worker government and parties. They reflect all the disgusting prejudices of capitalist society, and will viciously defend the Indian capitalist system against all threats.

In response to the historic strike of the DSAWHU, the lieutenant governor of Delhi, Anil Baijal, cracked down on the strike with the reactionary Essential Services Maintenance Act (ESMA), which gives legal dispensation for state forces to break up strike action. President Shivani of the DSAWHU has pointed out:

“The government does not even give the status of a government employee to anganwadi workers and helpers. It considers them as voluntary workers who work on honorariums [meaning they are not ‘working’ or providing a service in an official capacity]. Then how can the honourable Lieutenant Governor of Delhi enforce the ESMA here? Clearly, this step is completely unconstitutional and illegal.”

There have been anganwadi protests spreading in other parts of the country. For example, anganwadi workers and helpers in Tamilnadu are protesting for similar demands as DSAWHU.

The masses hate all the parties, which have been exposed through experience as enemies of the workers and farmers. The DSAWHU is also correct in not trusting the capitalist courts to mete out justice, because they ultimately exist to defend the rights of private property and big business. It is therefore absolutely correct for the workers to resume their struggle in the case of a court ruling against the DSAWHU.

This must be an indefinite strike, involving all exploited and oppressed layers in Indian society, directed against the source of their torment: the reactionary Modi government, the parasitic Indian capitalist system, and the multinational capitalist corporations they faithfully serve.