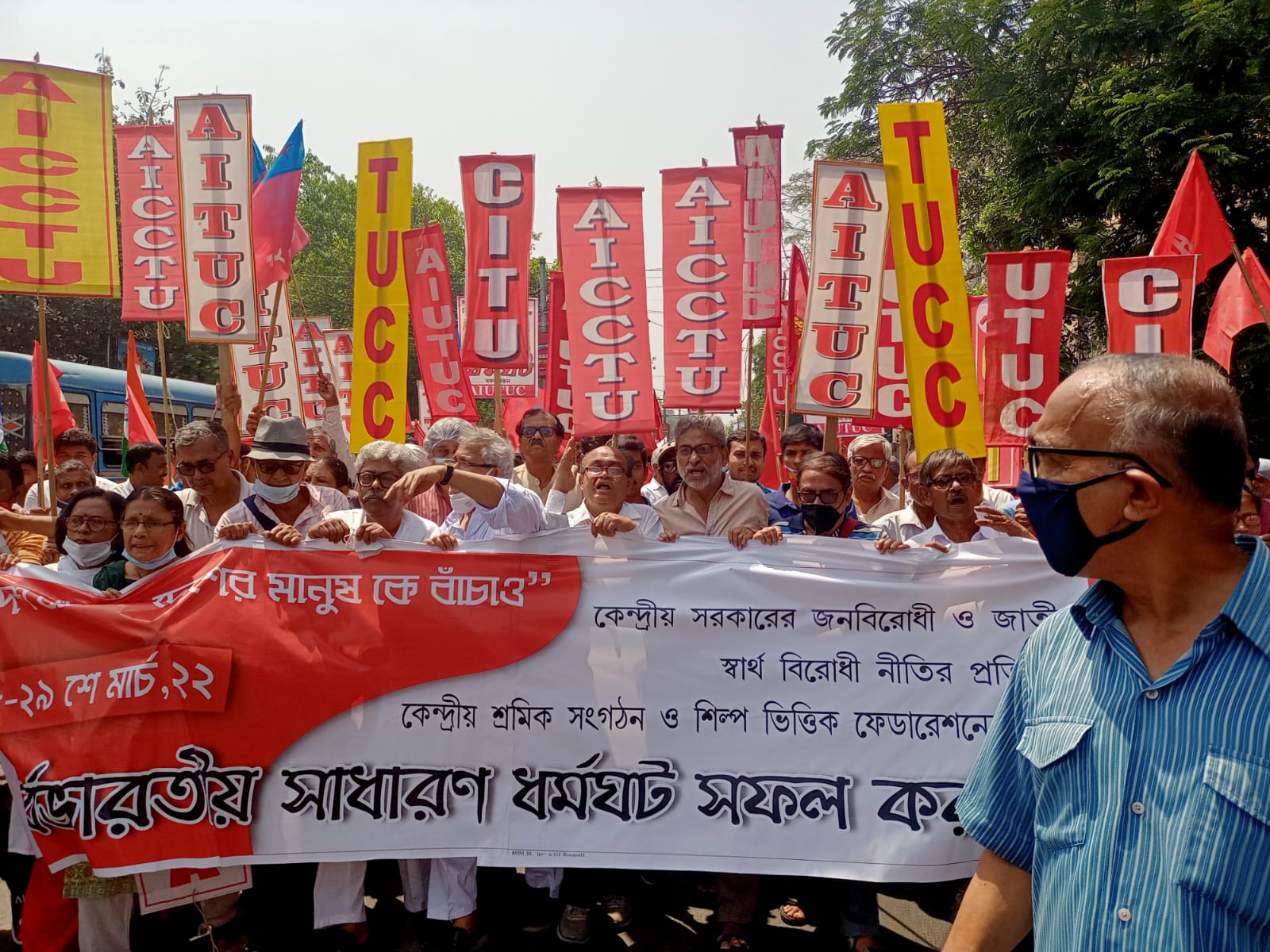 Today and tomorrow, workers across India will take part in a general strike, which the trade union leaders anticipate could involve over 200 million people. Demands include improved conditions and wages for workers, farmers and the poor; universal social security cover for informal workers; a halt to privatisations; and the scrapping of reactionary new labour laws.

The following is text from a leaflet was produced by supporters of the IMT in India, explaining the background to the strike, offering their support, and calling for the unions to be transformed from top to bottom into instruments of class struggle against the rotten Modi regime, and the parasitic Indian capitalist system it represents.

For the past eight years, the reactionary Modi regime has led unprecedented attacks on the rights of workers. The conversion of 44 labour laws into four labour codes will lead to even further exploitation. The conditions of workers will be undermined due to an increase in working hours, and it will become easier for the bosses to cut their wages. Unemployment under the Modi regime is already the highest since independence. The pandemic has accelerated the growth of unemployment and the economic woes of the masses in general, and with these measures, the lives of millions of people across the country will become even more miserable.

Modi's remedy for the crisis has been further privatisation of the major sectors of the economy. All natural resources have been opened to plunder by the corporations. In the recent annual budget, massive privatisations have been announced, the biggest in the history of the country. The plan behind the national monetisation pipeline includes further privatisation of the railways, defence industry, insurance, mining, highways, airports, ports, life insurance, SEZ (Special Economic Zones), and many more. These policies will further squeeze the masses and enrich the capitalists.

Modi has been able to win the recent assembly elections in five states due to the vacuum created by the left. Congress and other regional parties offer no alternative to the BJP. They follow the same capitalist policies and serve the interests of the ruling class. Modi has been able to win the elections in part because of the bankruptcy of the opposition parties, but mostly due to the failure of the Communist Parties, which have no programme to overthrow capitalism, and are always ready to form alliances with corrupt bourgeois parties to satisfy the leaders’ petty vested interests.

Modi, at the head of the BJP and RSS, is trying every tactic to divide the working class on religious lines by introducing a spate of reactionary laws to attack religious minorities and lower castes. These tactics support the ruling class as they divert the attention of the masses from class lines and burning economic issues towards religion. Opposition parties, including the right-wing reactionary Aam Aadmi party, which now rules Punjab along with Delhi state, are also fanning the flames of religious hatred, with hypocritical slogans about religious harmony and communal peace, in an attempt to blunt the class struggle.

Capitalism offers no solution to the horrors faced by the masses under one regime or the other. Caste discrimination, attacks on religious minorities, and communal pogroms by right-wing gangs have become the norm under the Modi regime. But despite these brutal attacks and the pandemic, there have been huge protests and strikes across India in recent years. Modi had to kneel down before the struggle of the farmers and withdraw the pro-corporate farm laws. The triumph of the farmer movement shows that a united and consistent struggle over a long period can snatch victory from the jaws of a draconian regime.

The farmers’ struggle has also shown the working class as a whole that there exist other avenues of struggle outside the electoral front where they can win their battles and defeat Modi’s government, backed by big business and multinational companies. A country-wide general strike is the best way to achieve the workers’ aims.

The two-day general strike across the country is an important milestone in this regard. But in order to stop this regime, what is required is an indefinite general strike, should the workers’ demands not be met at the end of this two-day strike. An indefinite general strike would not only deal a final blow to this draconian Modi regime but would also challenge the rule of capital in this country. It would transform the politics of the country. All reactionary, pro-capitalist forces would be swept away by the rising tide of the working class. The capitalist system would be shaken to its foundations.

A socialist revolution expropriating the multinational corporations and big business could bring the commanding heights of the economy under workers’ control, laying the basis for a democratically planned economy to replace the market economy. This is the only solution and way forward for the masses today, who are facing one of the deepest crises in history.

The problem the workers of India face is that the present trade union leaders do not see the general strike as a means of overthrowing the government, but merely as a protest, after which everyone goes home. We need better leaders than these. We must start from the bottom up to build an opposition inside the unions with the aim of building an alternative leadership, a leadership that genuinely represents the working class.

For decades, the left – the various Communist Parties, the trade union leadership – has tail-ended Congress and the regional capitalist parties like RJD, DMK and Samajwadi Party, believing that they represented the so-called “progressive” bourgeois. In India today, there is no such thing as progressive capitalists. They are all united against the workers and farmers. The left must break with these policies and understand that only class unity and consistent struggle by the working class, based on the ideas of revolutionary Marxism, can defeat the Modi regime and its poisonous politics of bigotry and hatred.

Our task today is to begin to build the fighting leadership the workers need. That starts with the building of a genuine Marxist Tendency within the Indian labour and youth movement. We invite you to join us in this task.