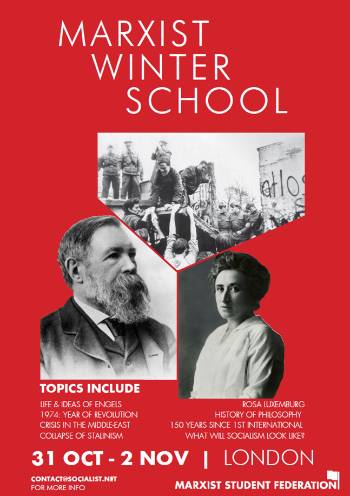 2014 marks the 150th anniversary of the founding of the First International by Karl Marx and Friedrich Engels - the first attempt to create a revolutionary international organisation.

Today, one-and-a-half centuries later, we find ourselves with a world in crisis. We are living in the most turbulent period in history, with instability at every level: a global crisis of capitalism; geo-political turbulence in the Middle East and Ukraine; and mass movements breaking out across the world.

In this chaotic and turbulent time, only the clear ideas of Marxism can provide the compass needed to steer a steady course. There has never been a greater need for revolutionary international organisation built upon the solid base of Marxist theory.

Socialist Appeal and In Defence of Marxism invite our readers and supporters to the International Marxist Tendency (IMT) 2014 winter school, where speakers and attendees from across Britain and Europe will be discussing the importance of Marxism and its relevance to today.

Contact This email address is being protected from spambots. You need JavaScript enabled to view it. to reserve a place, or visit buy your ticket in advance through PayPal below.

And with revolutionary socials in the evenings!