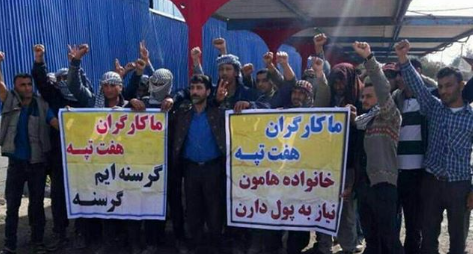 A wave of protests is sweeping Iran. There were 331 strikes and demonstrations reported in August involving all sectors: from the oil-and-gas sector, to students in the municipalities, farmers and more.

In the oil-and-gas sector, the workers spontaneously coordinated a strike with common demands, which at its height at the beginning of September involved 25,000 across the whole country.

The regime is terrified, and rightly so. This is the largest trade-union coordinated strike under the Islamic Republic. They tried to pacify the strike wave by giving in to the majority of the demands of the oil-and-gas workers. Additionally, the Haft Tappeh Sugar Cane Factory, which has been on strike since 15 June, has been promised many of their demands by parliament.

Still, the strike wave continues. In the past week, there have been 30 strikes and demonstrations reported. The victory of these strikes has shown that struggle pays off, as well as demonstrating the weakness of the Islamic Republic.

In the first week of August, the oil-and-gas strikes were centred in the oil-rich southwestern province of Khuzestan, but quickly spread across the country. The workers spontaneously started setting up strike committees and issuing weekly strike bulletins with slogans such as “If we do not work, there will be no profits!”

Strikes linked with the Iranian mechanical metalworkers’ union organised the #NoToHunger campaign, with a programme of demands for real wage increases, payment of unpaid wages and renewal of social insurance benefits.

The class struggle is increasingly taking on a national character, unprecedented under the Islamic Republic. This is historically significant, as it is the largest trade-union coordinated strike since the destruction of Iran’s independent national trade unions in 1953.

On 13 September, after 40 days on strike, the regime gave in to the oil-and-gas workers, hoping it could bring stop to this radicalisation with wage increases well above inflation, the renewal of insurance and payment of unpaid wages. But this victory for the oil-and-gas workers has only spurred on more strikes, while the #NoToHunger campaign has openly called upon other workers to link up with them.

The strike of the Haft Tappeh sugar plantation has come to national attention, with militant demands for renationalisation of the plantation under workers’ control and the arrest of the current owner; who embezzled and plundered the company. The militancy and leading role of the Haft Tappeh trade union has singled them out as a threat to the regime.

From the beginning of the current Haft Tappeh strike, the regime has attempted to dupe the workers; first by sending MPs to the strike and then going so far to invite an illegal, independent trade union to a parliamentary commission. This resulted in absolutely nothing but strengthening the workers’ resolve, and putting their faith in nothing but their own class.

On 14 August the Haft Tappeh trade union, along with more than 50 other trade unions, signed a joint statement that read:

“We, the signatories of this statement, declare that in the current economic crisis of this land, it is very natural and expected that more and more workers and oppressed groups will join these strikes. The crisis causing all people to lose their patience is exacerbated by privatisations, de-regulation of prices, declining living conditions for workers which are pushing them to the verge of death (not just poverty), non-payment of even poverty wages, etc. It is clear that, in order for these strikes to grow and achieve their demands in these critical circumstances, the striking workers must be able to organise and unite themselves more than anything else, and pursue the serious and high-risk matter of forming autonomous organisations based on the will and strength of the workers.”

After 70 days on strike, the authorities promised to oust the owner, renationalise the company, pay back wages and renew the social insurance of the workers. But so far, the owed wages have been paid in full only up to May, and insurance has not been renewed. The strike and protests will continue among the non-agricultural workers until the promises are fulfilled, along with the demands of workers’ control and rehiring of blacklisted workers.

Meanwhile, the government has blocked renationalisation and ousting of the owner, matters which will instead be taken to court. On 15 September, the union issued the threat that, if their demands are not fulfilled: “the workers will be forced to pursue their demands with their collective strength. The workers have no reason to wait, except to continue fighting for their rights”.

The Islamic Republic has nothing to offer the masses but empty promises and violence. Last Wednesday, the Haft Tappeh workers were attacked by hired thugs armed with swords, and a counter-insurgency unit. This is not the first time Haft Tappeh workers have been attacked, and nor are these attacks isolated to Haft Tappeh. Once again, the workers warned the authorities “the strike will never end but will restart quickly with large gatherings in town”.

The same fearlessness is echoed by the mechanical metalworkers’ union, concluding their victory in the oil-and-gas strike with the statement: “we have not only got our rights, but we also acquainted the Iranian people with the word ‘strike’. Of course, some of our comrades were blacklisted, some were arrested, but these comrades are also happy that this price has paid for their union”.

Iranian capitalism is at a dead end. It cannot tolerate the demands of the working class or their independent organisations. Iran’s economy is running on minimal capacity, isolated from the world market, which itself is in a deep economic crisis. In Iran, the crisis continues to escalate, with inflation, unemployment and the coronavirus pandemic growing rapidly. Meanwhile, the rich keep sucking the blood of the workers and poor, stealing and scheming their way to obscene riches. All they give to the workers in return are empty promises.

All the concessions and promises of the regime can be taken back at a moment’s notice. The working class must put its faith only in its own strength. To defend the working class and continue to widen the struggle, the strike committees should be connected at a national level and preparations must be made to escalate the struggle all the way to a general strike.

A national struggle must be organised on the basis of a common programme for real wage increases, payment of all back wages, insurance for all, an end to embezzlement, an end to privatisations and for the renationalisation of the big private companies.

Ultimately, the weak, crisis-ridden Iranian capitalist system cannot afford these reforms. And only a socialist revolution, nationalising industry and the banks under workers’ control, can bring an end to the horrors of capitalism.