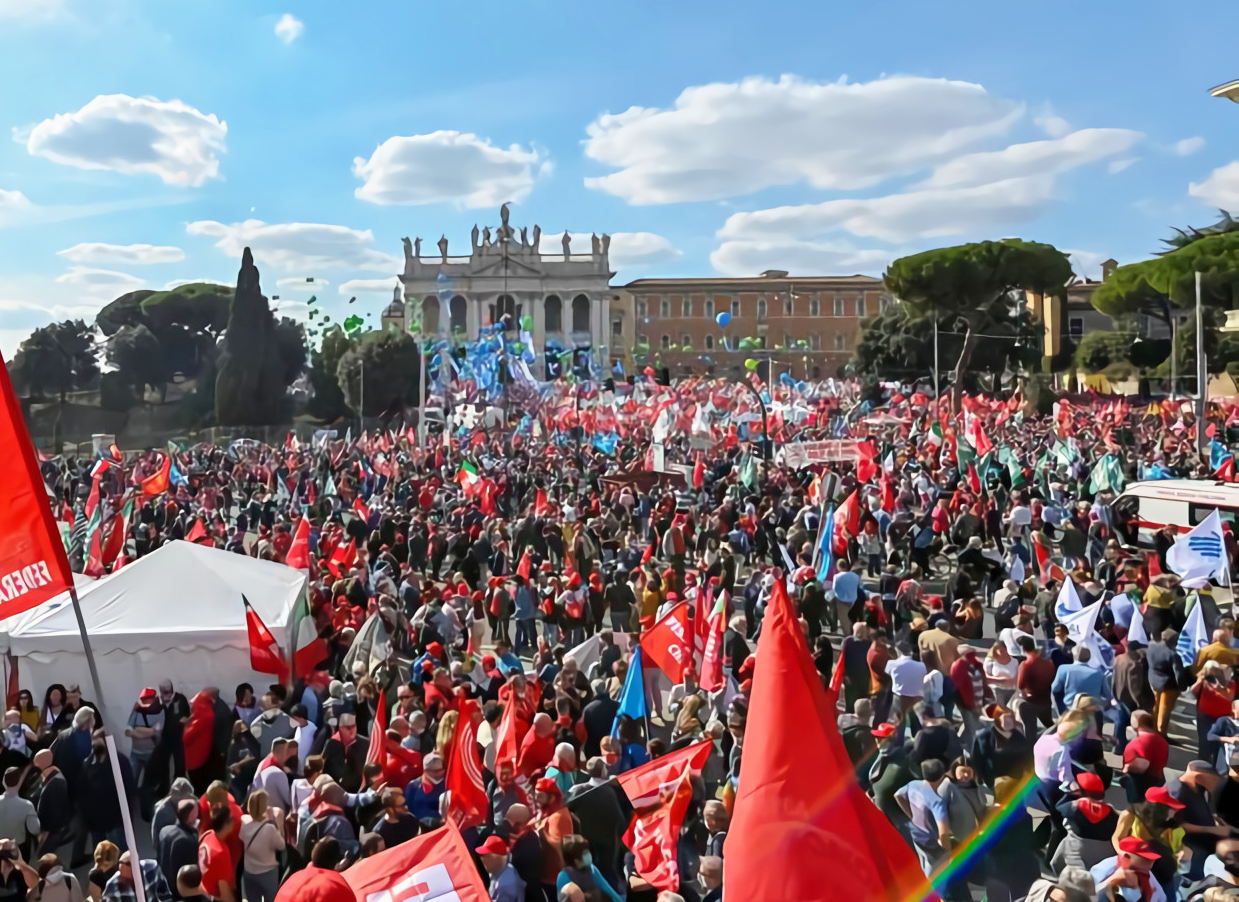 Last weekend, Italy saw one of the biggest demonstrations in the last 20 years as more than 200,000 people rallied for a massive anti-fascist protest in Rome. This was a colossal response to an attack against the national headquarters of the CGIL trade union a week earlier by the neo-fascist organisation Forza Nuova. The sheer scale of this demonstration shows the real strength of the working class. Only class struggle can defeat fascism.

A week before the protest, the national headquarters of the CGIL – the most important trade union in Italy – was attacked by a fascist squad belonging to the neo-fascist organisation, Forza Nuova. This occurred as Forza Nuova led a demonstration of a few hundred people against the introduction of the new “Green pass” measures.

The fascists broke through the building entrance, destroyed the offices, and smashed computers and furniture. They went through the office, floor by floor, kicking their way through office doors, and devastating works of art and paintings dedicated to events related to the history of the workers’ movement. The attack was carried out under the close watch of the police, who did not even lift a finger to prevent the fascists from wreaking havoc.

What happened on 9 October clearly exposed the role of the state. On the one hand, the armed forces of the state are regularly employed to defend factories, companies and their bosses when it is the workers who are fighting back. On the other hand, the state makes no effort whatsoever to hinder, and indeed tends to assist attacks on the workers’ organisations. 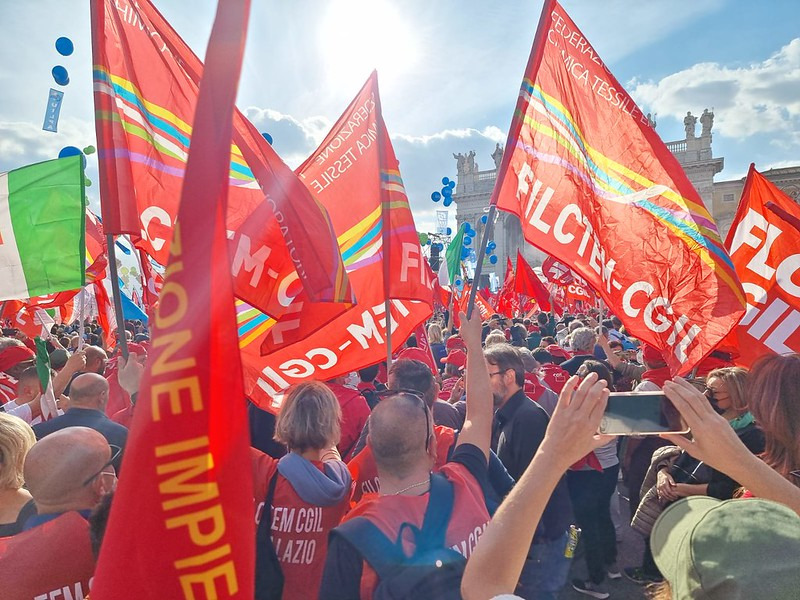 Workers immediately mobilised in defence of their trade union as a response to the fascist attack / Image: Sinistra Classe Rivoluzione

The attack immediately brought to the minds of many the events of exactly 100 years ago. At the time, the fascists operated undisturbed throughout the country, devastating and burning the headquarters of workers’ political organisations and trade unions. Clearly, the situation today is very different, and no immediate danger of fascism is in sight. Nevertheless, the video images of the attack on televisions were quite shocking.

It is for this reason that workers immediately mobilised in defence of their trade union – despite all the criticisms that they have towards the leaders of the union. It is one thing to understand that the trade union leaders have carried out moderate policies one too many times in the last few years. It is quite another to allow someone to destroy the headquarters of the trade union. This was the attitude that impelled many workers from all over the country to respond positively to the unions’ call for action.

On 16 October, trains and busses from all over the country arrived in Rome for the demonstration, the mood at which was incredibly militant. Songs from the 1943-45 partisan tradition were sung, along with anti-fascist slogans, banners and placards. A roar swept through the square when the CGIL national secretary, Landini, called for the dissolution of Forza Nuova, along with all the other neo-fascist organisations. Everyone in the square listened attentively to his speech.

However, the demonstration ended without the trade union leaders laying out a clear perspective for the continuation of the struggle. On the contrary, the union leadership has fully entrusted the fight against fascism to Draghi’s government – in much the same way as it has for the economic struggle in recent years, with terrible results.

This is where we, the Marxists, are intervening. The only way that the trade union can really defend its offices and the worker’s organisations is by broadening its basis of support. Recently, its base has shrunk precisely because of the moderate policies that the trade union leaders have pursued. But should an increasing layer of workers see that the trade unions are really prepared to fight against unemployment and lay-offs, for adequate wages and decent working conditions, then the number of workers willing to defend the trade union would increase. Ultimately, the fascists can only be defeated by means of class struggle. Thus, our slogan is for the CGIL to call a general strike.

With this slogan, militants of the Italian section of the IMT, Sinistra Classe Rivoluzione, took part in the demonstration. More than 100 comrades from all over Italy were present at the demonstration. Our slogans were welcomed at the protest, as proved by the fact that more than 700 copies of the Rivoluzione paper were sold. And that is not all! The stall that we set up at the demonstration with political and theoretical material attracted a lot of attention – we sold more than €400 worth of books and pamphlets and several people told us they wanted to continue discussing with us after the event.

This demonstration can only be the beginning. Draghi’s government is preparing further attacks against the working class, such as pension and welfare cuts. There are many workers, including three million public sector and school workers, who are still waiting for the renewal of the national contracts. But even the contracts that were recently renewed and approved by the trade union did not meet the needs of the workers. Inflation is rapidly increasing. In Italy, not only have real wages not increased in the last 30 years, but their purchasing power has actually declined by 2.9 percent.

Exploitation and speed-ups in the workplace continue to ratchet up markedly. Working conditions continue to deteriorate, as shown by the fact that 772 people died while at work in just the first eight months of 2021.

The demonstration of 16 October was a tremendous response to the fascist provocation. But anger is accumulating in the working class, especially because of the constant worsening of living and working conditions. Our fight for the CGIL to adopt the fighting programme and tactics that the workers need has been reinvigorated by the confidence that we take from this demonstration and from a new generation of workers who are preparing to raise their heads!