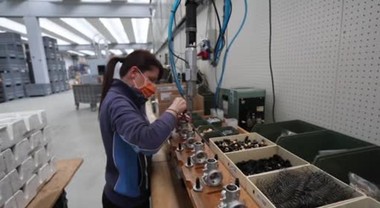 Since the beginning of the healthcare crisis, the decrees issued by the Conte government have, one after the other, increased the number of restrictions. This is on top of the ordinances from the different regions. A campaign has developed and has promoted social distancing through calls to stay at home, hashtags and appeals. But all this fervour did not affect the millions of workers forced to continue going to work in non-essential companies and services.

While everyone expected a general closure, by mid-March millions of workers realised that for Confindustria (the Italian bosses’ federation), and the government, their health and that of their families were not a priority. This realisation created a strong wave of strikes that forced the government to implement the decree of 22-25 March, announcing the closure of some non-essential activities.

However, the decree was deliberately written to give the bosses leeway. In fact, the rule that allows companies to open after providing self-certification to local prefectures that they are essential meant that as early as 6 April, almost 80,000 companies were already circumventing the rule.

The clause of silence and consent (if the prefect does not respond, the request is considered accepted) and the lack of sanctions for abuse gave the green light to the bosses.

The workers’ mobilisation is therefore ongoing as the problem persists, as evidenced by the government’s and the bosses’ attempts to reopen production well before the health risk has dropped to manageable levels.

From the beginning, we have considered the fight for the immediate closure of all non-essential activities to be decisive. The widespread unease and anger in the workplaces were palpable and on this basis we promoted the appeal "Workers are not cannon fodder", to commit to stopping production and to push the trade union leadership to act accordingly. This appeal has proposed a programme to be submitted to all workers in the fight against the coronavirus emergency.

The response was very broad: trade union reps, health workers, doctors, nurses but also office workers, metalworkers, chemical workers, transport workers, call centres, food retailers... About 250 delegates, trade unionists and workers from many territories and different categories, starting with the cities where the virus had spread the most. An appeal that was spread far beyond the companies and areas where the first signatories work and organise.

The appeal has also aroused interest outside Italy: it has been translated into English and further into French and Spanish, after it was picked up by the French CGT and Spanish CCOO, whose activists took the initiative of translating it. On the basis of the consensus gathered by this campaign, in a few days an assembly was organised on an online platform. It was the largest workers' assembly in the country during the healthcare crisis.

On Monday 30 March, more than 200 of us were present to discuss and follow the livestream, for four hours. On the evening of 30 March, there were more than 500 views of the assembly on YouTube. Dozens of people from different countries of the world were streaming the event live thanks to the English translation provided by comrade Fred Weston.

There were 20 interventions during the four hours of discussion between metalworkers, retailers, healthcare, transport, insurance and chemical workers, call centre operators, educators, as well as CGIL leaders.

We will soon publish the verbatim report of the assembly (the livestream is still available on the “Sinistra Classe Rivoluzione” YouTube channel) which will also include the contributions of those who could not intervene due to lack of time.

The assembly clearly demonstrated: 1) The level of consciousness of workers and grassroots union reps, who in the face of the inertia of the union leaders took the initiative into their own hands. 2) The widespread anger at the shameless behaviour of companies in prioritising their profits. 3) Strong criticism of the system as a whole.

Spontaneous initiatives have also been manifested themselves in several appeals addressed to specific sectors (such as sales or nursing homes workers). They explicitly aim to radicalise and articulate this struggle in all sections of the working class who find themselves at risk.

For the bosses, profits are the priority

After all, the dynamic arising from the decree of 22 March was explicit and unequivocally clear. This shameful pantomime initially caused confusion amongst the workers, before eventually revealing itself as a true insult to the working class. Conte announced the closure of production on the evening of 21 March. The decree, however, was late in coming out due to pressure from the bosses. In a letter addressed to the government, the president of Confindustria, Boccia, used economic and financial reasons to prevent the stopping of non-essential production.

Thus, the list of Ateco codes (used to classify businesses from different sectors) attached to the decree included companies from all productive sectors, many of which are not at all essential. There were foundries, chemical companies, defence companies, banks, insurance companies, call centres. The pressure from Confindustria was successful.

The decree, however, gave rise to a new wave of strikes that developed more intensely and over more days, in continuity with the strikes of the first days at the Pomigliano, Fincantieri and Leonardo factories. On 23 and 24 March, strikes were declared in different sectors, such as metalworkers and chemists in Lombardy and metalworkers in Emilia Romagna. The Secretary General of the CGIL, Landini, who initially did not distance himself from the government’s slogan "Italy does not stop", now threatened a general strike if the list of essential production sectors was not reduced. 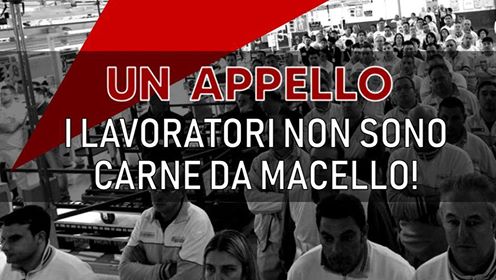 The "Workers are not cannon fodder" campaign aims to push the trade union leadership to act to stop non-essential production / Image: Rivoluzione

The strength of the workers and the fear that the strikes would become widespread forced the government to update and reduce the list of productive sectors defined as “essential” on 25 March.

However, as several comrades explained during the assembly of 30 March, not calling for a general strike was a mistake. In fact, the final decree did not solve the problem at all.

From the beginning, the risky situation faced by workers in health and social care was clear, whether managed by public or private companies. This was also made clear in multiple speeches during the assembly on 30 March. This dire situation also applies to large-scale food distribution, transport, and in general for social care work.

Personal protective equipment (PPE) was absent and the issue has not fully been resolved yet. The shortage continues. Cases have been reported of health workers being forced to take their masks off because there weren’t enough or because they were creating panic among patients. The provisions of the healthcare companies explicitly stated that masks should only be used around patients who are already sick or suspected of being infected.

Workers in essential services are among the major victims and vectors of contagion: the figure speaks for itself, almost 10 percent of those infected are health workers. And this figure is rounded down due to the scarcity of tests.

The healthcare system is collapsing. This is the result of 30 years of underfunding and privatisation policies, as well as the corporatisation and regionalisation of the health system. This is the reason why in the decree of 9 March, the Conte government decided that healthcare workers who came into contact with positive cases would no longer go into quarantine and would have to continue working. The perfect recipe for spreading the contagion. These people are criminals!

In every intervention, comrades gave reports of organisation, resistance and class struggle in the workplaces. Workers have been a real thorn in the bosses' side, demanding adequate security measures: this was the case in Esselunga in Corbetta (near Milan) or in Coop. At Ferrari in Modena, the plant closed under pressure from the workers and the RIS (Representatives for workers’ safety), including comrade Matteo Parlati, who denounced the lack of safety.

In a few days, the struggle of these workers put an end to the idea that there is no more working class, peddled by a section of the reformist and sectarian left, which is depressed and defeated. The class struggle is here and the workers have the strength to win it.

It was clear from the Assembly that we cannot lower our guard now. Committees of delegates, elected and recallable by the workers, must be created to monitor the implementation of the necessary health and safety measures and impose the sanitisation of all facilities and workstations. Workers must be able to stop production if they face an immediate danger of contagion. Where safety measures are lacking, there should be no hesitation in declaring a strike to ensure health and safety, or to shut down production. Putting the issue of workers' control in all sectors of the economy and social services at the centre is key to building an alternative economic and political power to that of the current ruling class.

The bosses are showing much impatience in wanting to reopen. Workers will have to take a leading role, as they have done in recent weeks, and demand that sectors that are not essential to the management of the health crisis remain closed until the workers are safe. The strikes in this last phase have slowed down but we are far from the end of the process. At the Lucchini steel plant in Brescia, the FIOM, FIM and UILM unions proclaimed 11 days of strike from 3 April. A phase of struggle has just begun.

We are facing the prospect of an unprecedented economic crisis and the bosses will try to make working people pay. Today, in Italy and elsewhere, the capitalists are getting into debt and tomorrow they will impose austerity policies to make the people pay, as usual.

Workers have understood that without them, nothing goes on. They are the only ones who can determine what activity is actually indispensable and urgent in a situation of emergency. The working class is the only real engine of society.

It is clear, beyond the crude nationalist propaganda, whose success is only relative, that the virus has no borders and is subjecting a significant part of the planet to the same dynamics. There is no racism in these times: when workers fight, they do so together. It is the workers, beyond their own nation, ethnicity and religion, who together can and must change society, so that no worker will ever be considered cannon fodder.

With this spirit in mind, the assembly of 30 March launched an international appeal that goes precisely in the direction of uniting the struggles of workers around the world. It calls for united international action to ensure the protection of health and safety and to take control of the economic system away from the bosses, finally putting the needs of all and not the profits of a minority of parasites at the forefront.