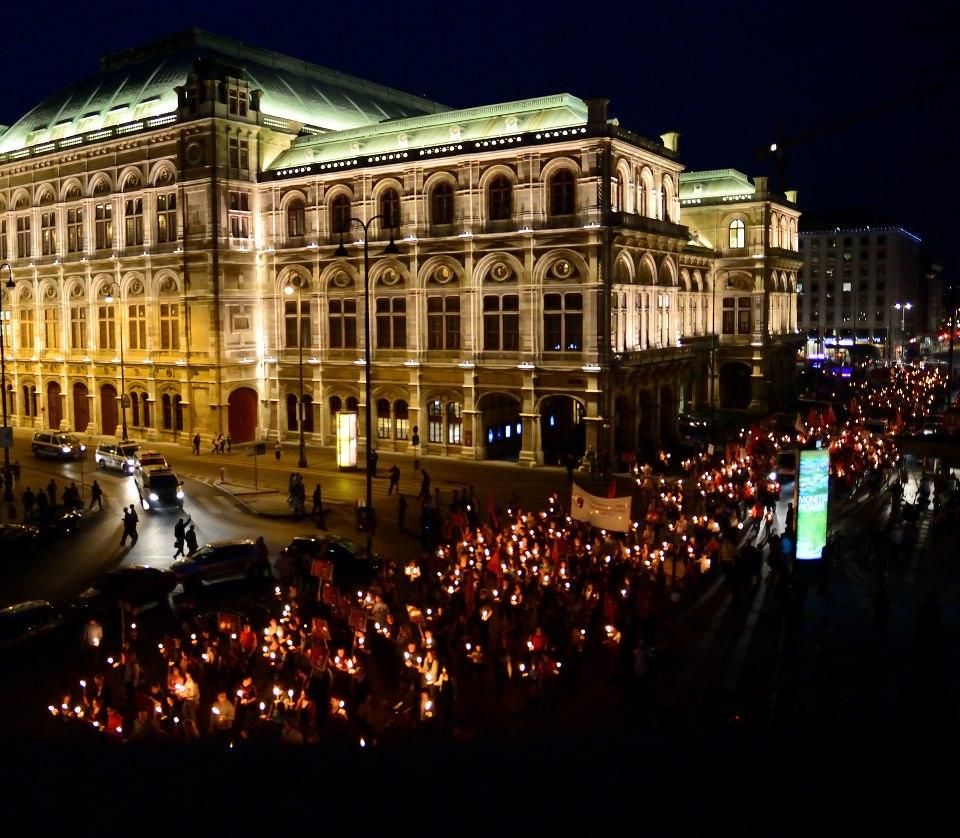 May Day has a long tradition in Austria stretching back to 1890 when the call of the First International to fight for the 8 hour day was eagerly taken up by the then recently unified workers movement. This year too international workers day was celebrated in hundreds of activities across the country.

In the build-up for this year’s May Day  Social Democratic Party (SPO) positioned itself as the “party of labour” that struggles for decent jobs, affordable housing and against tax evasion by the rich. The biggest march as always was the May Day demonstration of the SPO in Vienna.

The marchers have their meeting points in their district party offices or meet with their union or other organisations linked to the workers movement and then march in an organised fashion to the square in front of the city council. Tens of thousands people participate every year. But also in smaller towns and villages marchers hit the streets or at least meet for a public celebration. 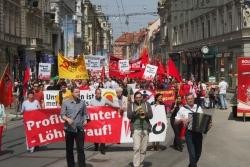 March of the Communist Party in GrazFor the first time the SPO leadership in the region of Styria abandoned any local celebration and marches and called for a central meeting in Graz where its leader spoke about his new favourite subject, the “Social-Liberal” project. This comes after a series of neoliberal reforms that have brought serious hardship for the poor and alienated the TUs and shop stewards from the party. In Graz it was the SPO youth organisations and the especially Communist Party that poured onto the streets of Graz.

But in the general scope of things this was an exception. In all other places the bulk forces of the unions reaffirmed their central place in party. This comes as there is a general election this year and it is clear that the struggle to get the SPO party in first is the top priority of the labour apparatus. 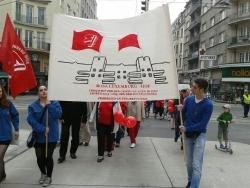 Even so it has to be said that this is happening without any sign of enthusiasm. Generally, there was a mood of indifference towards the party and its events of the day. There were fewer self-painted slogans than last year and the willingness to listen to the speeches of the party leaders was low. Most of the Viennese marchers left the meeting venue just before the leadership took to the microphones. The wait and see attitude of the movement also expressed itself as the followers of the Austrian Marxist journal Der Funke spoke with the marchers.

A new aspect of the event this year was an aggressive tone of the employers associations against the May Day activities. This coincides with a very aggressive stance of the Austrian industrialists in the ongoing collective bargaining in the chemical, paper and metal sectors.

The Marxists of Der Funke also participated in Bregenz where the Marxist-led YS organised a demonstration together with the forces of the migrant workers left-wing organisations. We were also present in Innsbruck and Salzburg, both at the left-wing rallies and the SPO celebrations. In Linz we formed part of the central rally that was dominated by the workers unions of the steel mills. In Graz the supporters of Der Funke were part of both the SPO gathering and the march and the particularly nice event organised by the Communist Party. In Vienna we formed part of the SPO marches, which also included the 30th April anti-fascist torch march of the youth organisations. With smaller forces we also participated in the torch march of Mödling (Lower Austria) and in the May Day celebration of the local party of Krumnussbaum (Lower Austria).

We sold 400 copies of our paper which had the headline: “There is enough wealth, it is time to change the system” and raised around 4000 € for the self financing-campaign for the Pfingsteminar, the traditional seminar of the Marxist left of the socialist youth organisations.

After the marches comrades, friends and families celebrated together in the parks with barbecues and drinks, enjoying the nice weather, praising the comrades who had sold the most papers, and celebrating the successful intervention in defence of Marxist ideas in the labour movement of Austria.