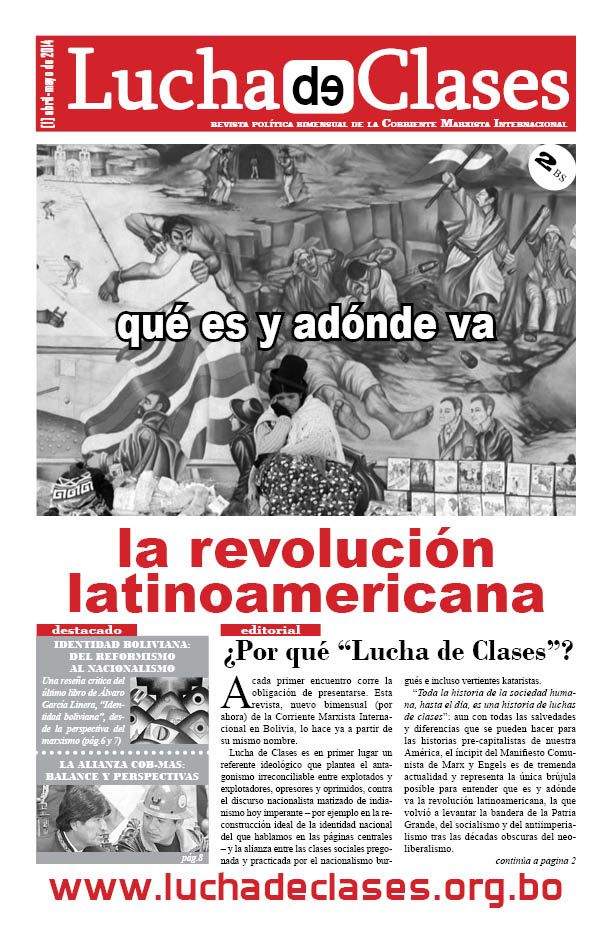 Lucha de Clases has been born. Its aim is to offer and represent the Marxist voice of the workers, the peasant, the indigenous movement and the youth in one of the countries with the strongest revolutionary tradition in Latin America and the world

The newspaper and the site

In the first issue of our newspaper we begin by explaining the reasons for our existence and the need for a Marxist perspective. Marxism has nothing to do with the ultra-leftism that helps reformists and bureaucratic elements among the MAS and the COB to separate the revolutionary vanguards from the masses, or with the opportunism for which a “democratic revolution” can solve the national and agrarian problems of Bolivia, freeing our country from imperialism. The latter was the main cause of the defeat of the Bolivian revolution in a past. We continue with articles that explain the programme of the Marxists and Marxist theory and articles that deal with the most discussed issues in the national and international situation.

The site isn’t the same as the newspaper. On the site one can find not only a way to contact us or the same articles of the newspaper. For example in our political review that we want to publish weekly, we propose to analyze from the Marxist point of view the most important questions of the political struggle in the country. Furthermore we are giving to our followers the possibility of being informed about all our activities and the seminars and discussions that our comrades are organising in several cities around the country as well as public meetings of Lucha de Clases and America Socialista.

As most of our readers know until last year we were publishing a newspaper called El Militante (Militant). The reasons we decided to change depends on our perspectives of the Bolivian and Latin America revolution. What’s happening in Venezuela, but also in Argentina, Brazil and so on, is clearly showing that the Latin-American revolution is entering in a new stage, where the effect of the global crisis of capitalism are proving that there is no third way between socialism and capitalism.

This is true even in a country as Bolivia, which for specific reasons is growing more than the Latin American average. Forced by the situation and their own reformist perspectives, the government has made a lot of concessions to the national bourgeoisie and multinationals. The increased import of foods has led to a suspension of the agrarian reform, disconcerting the peasant bases of the MAS. The need to attract capital to the mining industry has led to a law that criminalize social and trade union protests while give to the multinational a lot of benefits. The future is not of gradual, peaceful progress to the solution of the most important problems. The future is one of class struggle.