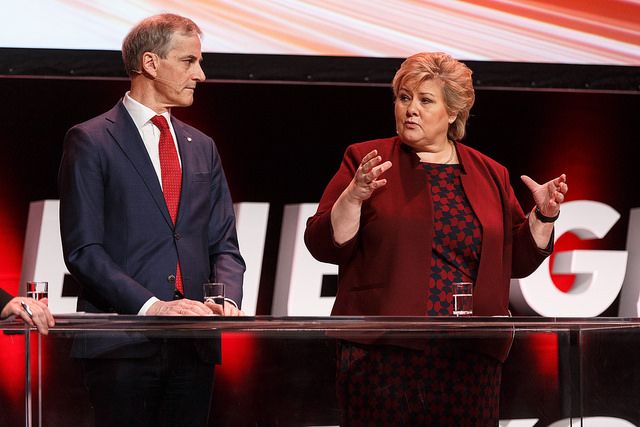 On 11 September, Norway held a parliamentary elections. These were the first elections since the collapse of the oil prices, which led to Norway’s first austerity programme since the 2007 crisis. But in spite of the attacks that it had carried out against the working class, the right-wing government was re-elected after the main party of the left failed to provide a credible political alternative.

The last decade has seen a spike in the privatisation of traditionally public services, especially in childcare and health services. In Oslo when the right wing was in power, several public nurseries were forcibly sold to big private companies like Norlandia whose owners in september 2015 and march 2016 paid out dividends to the amount of 102 million Norwegian Kroner - equivalent to 10 million euros.

Along with the privatisation of childcare institutions, the ones which remained public have deteriorated due to cuts. In the early 2000s all kitchen assistants were sacked from public nurseries in Oslo. Since then, the children have had to settle with eating slices of bread prepared for them by their own parents.

Meanwhile, as it has carried out cuts to the public sector, the government has also cut taxes for the rich, including inheritance tax - which was abolished - and wealth tax. This is much the same program, although in a milder form, as what we have seen in other parts of Europe over the past two decades.

Under these conditions, it should not have been hard for the left to have won the elections. But the performance of the Norwegian Labour Party (Arbeiderpartiet, AP) was abysmal. Not only did it fail to increase its share of the vote, but it even lost votes. Becoming the big loser of the elections the party received 27.4 percent of the vote, down 3.5 percent from the previous elections and landing on less than 30 percent of the vote for the first time since 2001.

The leader of the party failed to give a definite answer to his standpoint on privatisations. He invited the Left party (Venstre, V)-- a liberal party which is left only in its name, to negotiations and cooperation, and refused to work with neither the left wing Red (Rødt) nor the Green Party. This made AP indistinguishable from the Conservatives.

Another reason for the party’s results was the campaign within the right-wing press to expose a series of scandals involving the AP’s leader. These scandals involved his investment in the “Egerton Capital Equity Fund plc” hedge fund. This fund has has stocks in companies such as Safran, which is involved in the production of nuclear weapons

The fact that the leader of the AP is a multi-millionaire with investments in all kinds of industries adds to the impression of the party as being rather part of, than against the establishment. They promised to restore some of the tax cuts which the government had granted the rich, although not even all of these. But this would at best, only have restored an unpopular status quo. But the workers and youth of Norway are looking for real change. Just retaining the status quo is no longer enough.

In such a situation, a layer of the working class will turn to vote for the right-wing, including the racist Progress Party (Fremskrittspartiet, FrP). The FrP managed to retain their vote from the previous elections, along with their coalition partner, Conservative (Høyre, H). But these elections weren’t won by the right wing, they were lost by the AP. All of the parties supporting the current government saw their votes drop.

In fact, in contrast to past elections the far right party FrP was unable to dominate the media outlets with their usual racist venom. Instead, as we have seen in the US, Britain, Spain and France in the past period,  we witnessed an increased interest in the left after four years with a right-wing government. On this basis, the two small parties on the left increased their vote. Red managed, for the first time, to get a deputy elected to parliament after receiving 2.4 percent of the vote - this was an increase of 1.3 percentage points. This is a historic achievement of the party on the back of growing discontent with both AP and to some extent the SV.

The SV (Socialistisk Venstre, SV) also increased its vote though, going from 4.1 percent in the previous elections to 6 percent this year. The SV recovered half of what they lost when they were in government with AP from 2009-13.

The two smaller left parties did particularly well in the working class areas of Oslo. In the whole of Oslo, Red received 6.3 percent of the vote - 3.1 increase since the last elections. The SV received 9.3 percent in Oslo, 3.1 percent more than last time. Traditional working class areas like Gamle Oslo show the real potential of the left. Here Red and SV got 12.7 percent and 16.2 percent respectively, with Red increasing its votes by 4.4 percent. This was mainly due to dissatisfaction with the Labour Party.

In its campaign, Red highlighted the deterioration of the welfare system and demanded an end to the welfare profiteers. Red proclaimed that they would only support a “red-green” government on the condition that it would end the privatisation of the welfare system and the extracting profit from welfare institutions. They stopped short, however, of demanding the privatised services be renationalised. The fate of SV in Norway, the Socialist People’s Party in Denmark or the Left Party in Sweden are all warnings to Red. Supporting a Social Democratic government must not be unconditional, furthermore, any party which supports austerity policies and attacks on the working class will be punished come election time. These remains important lessons for the future.

The elections showed that Norway is not immune to the political trends affecting the rest of Europe. We can see a tendency towards polarisation. Sections of the working class and the youth has started to draw radical conclusions. Norway has yet to feel the more dramatic effects of the crisis, and is lagging behind developments. The reserves the ruling class accumulated in previous periods still allow for some breathing space. Yet, the process has begun. A wider layer is becoming dissatisfied with the current politics of cuts and attacks on the vulnerable and poor, and tax cuts for a wealthy minority who are often subsidised with tax money for “providing” welfare services.

The government being formed coming out of these elections, will not be stable. The parties in government H and FrP do not have a majority and are dependent on both V and KrF. Already now, KrF is reluctant to support a government containing FrP. Over the coming years, we will see further attack on the welfare state and labour laws, more cuts for the poor and less taxes for the rich. This will inevitably at some stage provoke a response that could bring down the government.

The unions and the parties of the left need to prepare a fight back against the government's privatisations and attacks by organising demonstrations and strikes. New layers will be brought into such a movement, whether led from above, or spontaneously organised from below. These will provide the basis for a new move to the left over the coming years.

For Marxists, this provides an opportunity to explain how a well functioning welfare state is not compatible with a capitalist economy in decline. The only guarantee for the continual existence of the welfare state, even in Norway, is socialism.