This article was originally published by our Brazilian comrades on 29 May. The situation has developed subsequently, and we will release updates in due course.

The development of the political crisis in Brazil, deepend by the pandemic, has rekindled discussions about the possibility of a coup, a self-coup, or even the establishment of a fascist regime in the country.

This is not a new discussion. In the 2014 elections, the poor result of the PT in the states and the near defeat of Dilma for the presidency caused some sections of the left to put forward an analysis claiming the advancement of a conserviative wave. Four years later, the electoral victory of Bolsonaro was viewed by these same sectors as opening the door to fascism.

The analysis of the political situation and the perspectives go much deeper than the superficial impression and speeches given by the “official” leaders (of PT, PCdoB, PSOL, CUT, etc.). It is necessary to look at the concrete situation of the relationship of forces between the classes, whose struggle makes the wheel of history turn worldwide.

Esquerda Marxista opposed the analysis of a “conservative wave” and the imminence of fascism because, concretely, the working class was not and will not be defeated and, despite barriers and betrayals of the leadership, the youth and the workers have repeatedly demonstrated their willingness to fight. There is also no social basis capable of sustaining a fascist regime or dictatorship in Brazil. Since 2013, a hatred of the system has grown throughout the population. The PT on the other hand has been a faithful defender of the system, of bourgeois democracy and institutions, that continuously attack and humiliate the workers and deny a dignified future for the youth.

Bolsonaro obviously has totalitarian intentions and fascist inclinations. He gained support by surfing the wave against the system using demagogic speech. But there is a great distance between what he wants and what he has the capacity to achieve. It must be noted that today Bolsonaro is much weaker and more isolated than when he took office.

Many people who fell for the deception and voted for Bolsonaro quickly regretted their decision. After five months in government, a marvellous movement of youth took to the streets, and in different demonstrations the rallying cry of “Fora Bolsonaro” (Bolsonaro Out) was widely adopted. At the beginning of the pandemic, we saw the spread of pot-banging protests all over the country, with “Fora Bolsonaro” being sung from the windows. 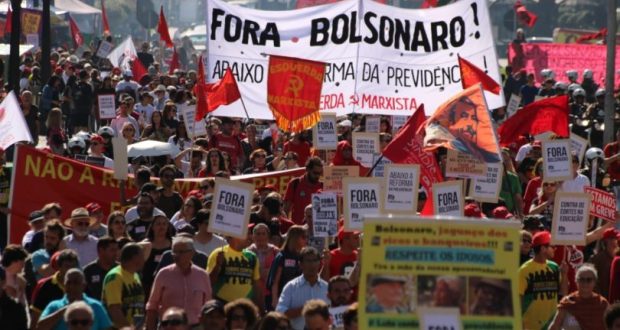 Bolsonaro's government was met with almost immediate mass opposition, and its popularity has only fallen since / Image: Giorgia Prates

The level of disapproval towards the government has reached record breaking levels. According to a survey published in Datafolha on 28 May, 43 percent of the population consider the government to be bad or terrible, while a survey published by Atlas Politico on 27 May showed a higher rate of disapproval at 58.1 percent. Regardless of the difference between the two surveys conducted during the same time period, they both demonstrate a progressive increase in rejection of the current regime.

What would be the social base of a Bolsonaro dictatorship? The small group of radical denialists who demonstrate against social distancing in front of the Planalto Palace on Sundays? The “300 of Brazil” led by Sara Winter? The commentators on social media, most of which are probably bots? This is a very weak base for facing the majority of the population, which increasingly hates Bolsonaro and his government.

Former Boslonaro supporters who rode his coattails in the election are now in staunch opposition to him. Governors Doria and Witzel are the most emblematic cases. They are rats jumping from a sinking ship. As is Moro, who has come out as critical of the government to increase his chances of being elected in 2022.

The bourgeoisie is intensifying the tone of their criticisms. The FHC has called for Bolsonaro’s resignation. The main news outlets (Estadão, Folha, Globo, etc.), who are spokespeople for the bourgeois sectors, criticise the government on a daily basis. The disclosure of the video of the reunion of ministers demonstrates that important sectors of the bourgeoisie are working to erode the government.

Fascism, dictatorship and parliamentary democracy are forms of domination by the bourgeoisie. Today, the majority of the bourgeoisie do not support a coup or a self-coup by Bolsonaro. For this reason, the general position of the bourgeois analysts was to reject minister Augusto Heleno’s threat that the possibility of the seizure of the president’s cellphone “may have unforeseeable consequences for national stability”, as well as the statements by Congressman Eduardo Bolsonaro that a “moment of rupture” of “even greater conflict” is not a matter of opinion; it is what will happen.

No basis for a coup

Vice-President Hamilton Mourão, an alternative representative of the bourgeoisie, on the possibility of the fall of Bolsonaro said the following:

“Who will organise a coup? The armed forces? What is this, the 19th century? The class does not understand. What exists today is a permanent strain between the powers. I don’t speak for the Armed Forces, but I am a reserve general, and I know the Armed Forces: I see no reason for a coup.”

And regarding the statements of the son of the deputy president:

“Save me. He is the deputy. He says what he wants. Just like a deputy of the PT says what he wants and that nobody says it’s a coup. He did not serve in the army. Who will close Congress? It is out of the question, there is no situation for that.”

It is not a matter of simply trusting Mourão’s words, but understanding that he, who knows the Armed Forces, has assessed that today there exists no political conditions in the Army, the Navy or the Air Force embark upon the adventure of a coup.

Vice-President Hamilton Mourão has accurately reflected on the lack of any basis for a coup in the armed forces / Image: Isac Nóbrega/PR

The ruling class has no appreciation for democracy in general. The international offensive of the bourgeoisie has seen attacks on democratic freedom and the criminalisation of struggles. The brutal repression by the state was recently seen against the yellow vest movement in France, against the struggle for the autonomy of Catalonia in Spain, against the wave of revolutionary protests in Latin America last year, etc. If today the bourgeoisie does not openly support a dictatorship in Brazil (and it is also not its line internationally) it is because the varnish of bourgeois democracy is more convenient at this moment, and because they know that moving in the direction of a clear totalitarian regime could provoke revolutionary struggles which currently lie dormant. In Brazil, a dictatorship led by Bolsonaro would be a path to total disaster.

What we are seeing here is the conflict between the two powers of government: the Executive (the Bolsonaro government), which is increasingly losing support of the population and the bourgeoisie itself (which acts like an injured animal trying to attack to defend itself); and the STF, the judiciary, which seeks to resume its role as protagonist in a Bonapartist political regime, which it had gained mainly from the trial of the so-called Mensalão scandal and deepened with Operation Car Wash. The government, in reality, is seeking an alliance with the National Congress and the so-called “centre” parliamentarians to block the path to impeachment. The majority of the Congressmen, on the other hand, are interested in the funding and functions of the state apparatus, and in stopping the resumption of the judicial offensive. In the fight between powers, the communists are not in favor of the STF/Judicial, Executive, or Legislative bodies. Every arm of the capitalist state is used for defence of the regime of private ownership of the means of production.

The bourgeoisie is divided. This is expressed in the conflict between the powers and even within these powers (there are clashes between the STF ministers themselves). The extreme instability of the world political situation has the bourgeoisie walking on eggshells with a giant economic crisis in its lap and a pandemic in its arms.

In Brazil and in the world, capitalism could have been overcome long ago. What prevents the revolutionary victory of the proletariat is the betrayal by the leaders of political movements and trade unions who claim to represent the working class. They are the same who now spread the supposed threat of fascism and dictatorship are around the corner, and use this to justify the defense of bourgeois democracy and class collaboration. The working class and the youth must overcome the directives of these leaders with an independent mobilisation to form new paths and pave the way to a new society. It is possible, and it is necessary.