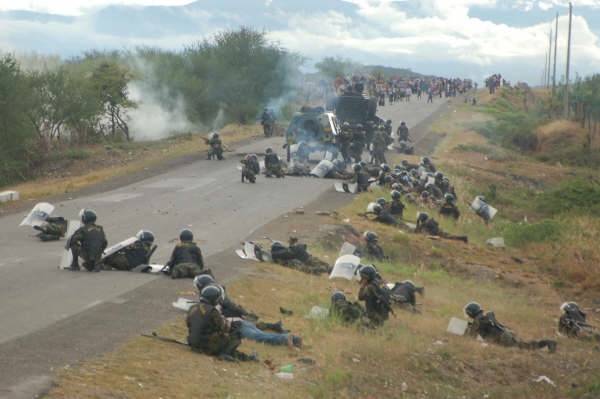 A severe crisis has opened up in Peru, with the Garcia government being pressurised by the mass movement, involving hundreds of thousands of workers. The government can now either step back and try and gain time or go on the offensive with repressive measures. Whatever they do, the movement will not go away. 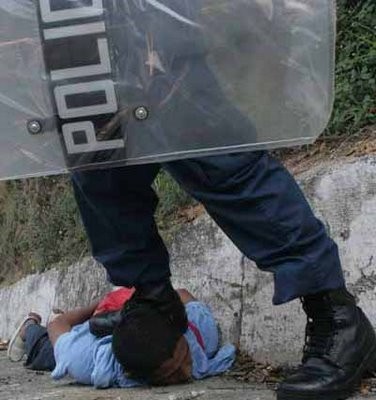 The brutal repression by the police in Bagua, Amazonas, with the massacre of more than 30 Amazonian indigenous people and hundreds more injured, has generated a mood of widespread anger among the Peruvian people against the regime of Alan García. This expressed itself in the militant and united National Day of Protest on June 11, which saw demonstrations of hundreds of thousands of workers. In this way, the crisis of the regime, which opened up with the mass uprising of 2000, is becoming deeper and acquiring pre-revolutionary features.

The APRA regime and the right wing attempted to bring down the heat of the class struggle by suspending for 90 days the implementation of decree DL 1090 on the privatisation of the Amazonian jungle, but they did not achieve their aims, as the indigenous peoples are demanding the complete repealing of the decree. Furthermore, the Amazonian peoples agreed to radicalise their actions as of today, June 11.

Faced with the right wing tactic of "suspending the DL", the nationalist MPs of the PNP declared themselves on strike in parliament, demanding the repeal of DL 1090, thus revealing the profound political crisis that Peru is passing through.

For the last 60 days of government crisis, the answer of the government has been a contradictory one. We have witnessed frequent zigzags and the government going back and forth with the right-wing opposition. The reason for this is that García is fully committed to going ahead, at whatever cost, with his neo-liberal policy of privatisation of the Amazonian rain forest, as his way of showing his loyalty to imperialism.

But the right wing is split on the issue of how to handle the mass movement. "The suspension of legislative decrees 1090 and 1064 – passed by Congress – should act as a safety valve which would lower tensions and open the way for a definitive, rational and commonly agreed solution to the very serious crisis of Amazonia", states the editorial of the daily El Comercio (June 11, 2009), expressing the views of the most intelligent section of the ruling class.

While on the other hand, the most extreme section of the ruling class points out that, "At this point, there is no longer any reason for the continuation of the agitation in the jungle, if the contentious decrees have already been suspended... It is time to restore full order in the jungle, ensuring that the country is ruled by Law and not by violent tantrums with spears and arrows which end up with gorged police officers. If they want to strike, let them strike, as it is their right, but the police and the Army must repress them violently, without fear." (Correo, June 11, 09).

Lenin pointed out that a revolutionary situation has the following characteristics: 1) the ruling class is divided and in crisis, 2) the middle class vacillates between the bourgeoisie and the working class, 3) the masses are ready to struggle and to make the utmost sacrifices to take power, and 4) the existence of a revolutionary party and leadership ready to lead the working class towards the conquest of power.

And these factors ‑ with the exception of the leadership, which by unjustifiably delaying the calling of a new National Strike until July 8 has shown it is not up to the needs of the working people ‑ are present in the current situation of the class struggle in Peru. If there were a genuine Marxist leadership in the CGTP trade union and the other unions, the fall of the regime would be a question of days. However, such a leadership is still to be built. We aspire to becoming an embryo of such a leadership.

The perspectives for Peru are extremely explosive. The regime has two ways it can go. Either it repeals the anti-Amazonian Decrees (their suspension is already a concession, their repeal would mean a victory for the mass movement) and thus turns back the political crisis (which is what El Comercio is advising), and take up the initiative once more at a later stage (although today's National Day of Action has weakened the government even further), or it resorts to more repression, thus polarising the class struggle even further, which could lead to a revolutionary crisis which could put an end to Garcia and Co. According to the most recent statements by the government it would seem that it has chosen the latter (helped by the breathing space that the leaders of the social movement have given it).

The calling of a National Strike for July 8 is a step forward, but it is too much of a delay. In three weeks many things can happen. By choosing this date, the Front in Defence of Life and Sovereignty (CGTP, CONACAMI, CCP, CAN, etc) will allow the forces of the regime, which are now in chaos, to reorganise their forces.

Furthermore, in these three weeks our Amazonian brothers could become demoralised, having been on strike for two months already. The government may use repressive measures or even succeed in dividing them. The calling of the strike on July 8 does not relate to the real rebellious mood of the Peruvian working masses at this moment in time.

Therefore, the Marxists of the Corriente Perú Militante, propose that the FDVS should call in the next few days a Peoples' Assembly in order to draw a balance sheet of the June 11 Day of Action and to decide democratically (with representatives elected by the rank and file nationally) the next steps of the struggle, including a Peoples' March on Lima (in the South there is already talk of the need for a new Collasuyo March like the one that overthrew Fujimori).

The Corriente Perú Militante reiterates the programme we proposed in our previous statement, which we are putting forward for the consideration of the workers, peasants and peoples' movement:

Starting with the nationalisation of the Amazon and the mines, and carrying out the rest of the points of this programme, we would be able to provide a solution to the national crisis as a whole. This movement should lead to a socialist government of the Peoples' Assembly. Either they win or we win!

Down with Garcia! National strike and march on Lima!

Nationalise the Amazon and the Mines!

Homeland, Socialism or Death – We will win!