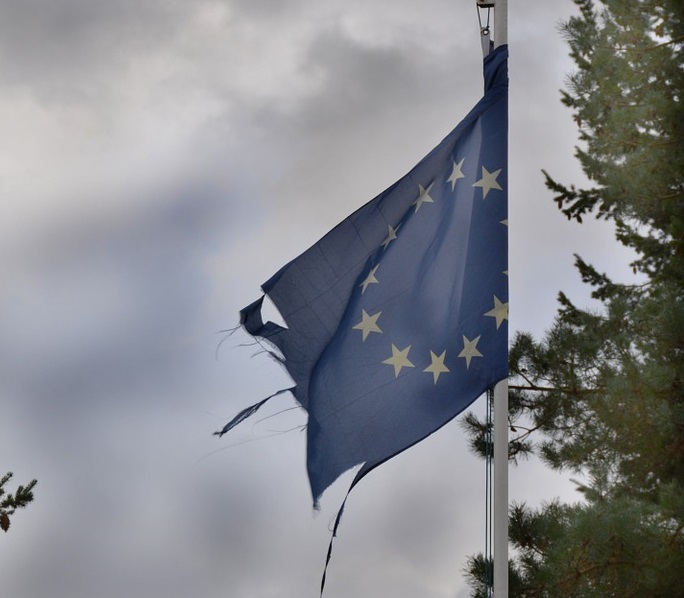 The European debt crisis of 2009 marks a decisive turning point in the history of European capitalism. Across the continent, the economic, diplomatic and political situation is characterised by uncertainty, instability and collapse. Everywhere, contradictions which had built up under the surface for decades have exploded onto the scene.

This historic crisis of European capitalism expresses itself most graphically in the existential crisis of the European Union. Set up in order to overcome the natural limits of the bourgeois nation state, the “European Project” now has gone into reverse, with protectionist and nationalist tendencies gaining ground in every European country.

All of the driving factors which had hitherto pushed European integration forward have now turned into their opposite. The Single Market, free movement and the single currency, which in the past had brought great profits for the capitalists of Europe, have now become a gigantic fetter which threatens to drag all European nations into a seemingly never-ending crisis. All of the old divisions have re-emerged with renewed force.

In this context, the result of the recent referendum on EU-membership in the UK has sent shockwaves across Europe and the world. The decision to leave the EU, with of 52% of the vote, was a shattering blow to the stability and confidence of the EU and its institutions. Now, the prospect of the further referenda in other member states and even founding members has been raised.

This throws up a number of questions for Marxists, not just in terms of our perspectives for the class struggle in Europe, but also theoretical questions on the nature of the EU and the attitude of Marxists to the idea of European integration. It has never been more important to re-visit these questions from the standpoint of Marxist theory as it is with these ideas alone that we can orientate ourselves in the heavy political squalls to come.

The crisis in Europe - Part one: 2016 - another year of European austerity by Josh Holroyd

The crisis in Europe - Part two: Fortress Europe under siege by Josh Holroyd

The crisis in Europe - Part three: What is the EU and where is it going? by Josh Holroyd

The Class Nature of the European Union

Socialist answer to the EEC by Ted Grant

Capitalist Common Market – No! For a Socialist United States of Europe by Ted Grant

- These two texts written in the 1970's deal with the character of the Common Market and the question of the UK's accession to it.

A Socialist alternative to the European Union by Alan Woods

The slogan of a “Socialist United States of Europe”

On the Slogan for a United States of Europe by V. I. Lenin

The Programme of Peace by Leon Trotsky

- The slogan, for a “Socialist United States of Europe” is a common thread which binds together all of our material on the question of the EU. It is not possible to have an independent class position without it. But this slogan was not first used in the debates surrounding the UK’s accession to the Common Market, nor did it emerge along with the European Coal and Steel Community in 1951. In fact, it evolved out of discussions and debates held between the internationalists during the First World War.

Whilst the workers of Europe and its colonies were being forced to murder one another, Lenin and Trotsky considered the demand for a “United States of Europe - without monarchies, standing armies and secret diplomacy”. It is in Lenin’s 1915 article on this question that we encounter his famous statement that “a United States of Europe, under capitalism, is either impossible or reactionary”. Further, in Trotsky’s The Program of Peace, revised and republished in 1917, he argues that the democratic unification of Europe can only be achieved by revolutionary means, which would in turn “transfer the power only to the proletariat”.

Is The Time Ripe For The Slogan: ‘The United States Of Europe’? by Leon Trotsky

Ted Grant would take up the slogan for a “Socialist United States of Europe”, in a draft document prepared in 1944, as the only means of ensuring the self-determination of subjugated nationalities after the defeat of German imperialism in the Second World War. This stands in stark contrast to the Schumann Declaration of 1950, which set out the aims of the capitalist unification of Europe, including the “development of the African continent”.

Marxists looking to delve deeper into the broader questions which underpin our analysis of the European Union should also study Marx’ and Engels’ works on the question of Free Trade and, most importantly, what attitude workers should take to it.

On the Question of Free Trade by Karl Marx

- In his speech on Free Trade, delivered to the Brussels Democratic Congress in 1848, Marx exposes the hypocritical and predatory nature of Free Trade from the point of view of the working class, but goes on to reject the alternative of Protectionism, stating, “One may declare oneself an enemy of the constitutional regime without declaring oneself a friend of the ancient regime.” Finally, he comes out in favour of Free Trade in the revolutionary sense that in developing the antagonism between capital and labour, it thereby hastens the social revolution. Here we see an independent class alternative being put to two equally exploitative bourgeois camps, which can still assist us today, long after the doctrine of Free Trade has ceased to play any progressive or revolutionary role.

The Free Trade Congress at Brussels by Friedrich Engels

- Engels's report of the Free Trade Congress in Brussels, where Marx himself could not comment, where he comments on various arguments put forward by bourgeois advocates regarding free trade. This marks the beginnnings of Marx and Engels's developing their independent working class position.

- In On the Question of Free Trade, Engels develops the arguments put forward by Marx in the light of the rapid economic development seen in Europe in the period following the revolutionary wave of 1848. As well as explaining that neither Free Trade nor Protectionism will delay “the expected social catastrophe”, Engels traces the development of “rings” or “trusts”, used to fix prices and “avoid unnecessary competition”, an essential feature of modern imperialism and the model for the first ever incarnation of the EU, the European Coal and Steel Community.

Imperialism, the Highest Stage of Capitalism by V. I. Lenin

- Written at the height of the First World War, fought for the redivision of the globe between the European powers, Lenin’s masterpiece identifies the fundamental elements which would come to define world history over the following century: The transition from free trade to monopoly, the extreme concentration of wealth and the domination of finance capitalism, the crushing of the right of self-determination under the weight of the world market - all of these features can clearly be found at the heart of the EU today.