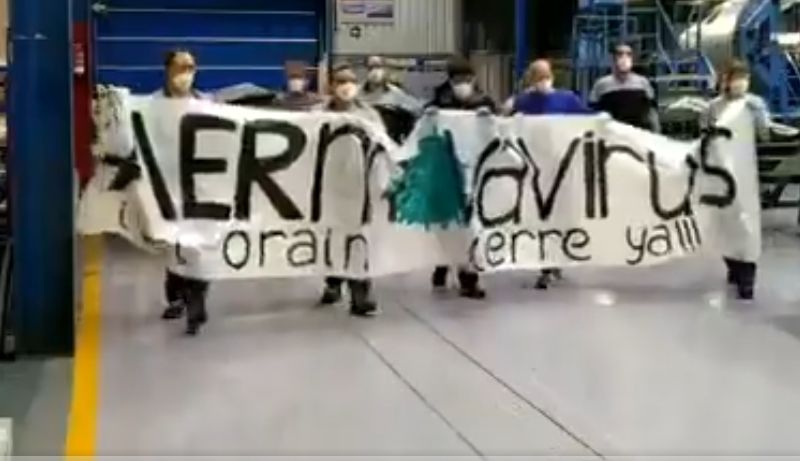 The Spanish government has proven itself powerless to deal with the spread of the coronavirus. It urges the population to “prepare for hard times”, a forecast which data from the Ministry of Health confirms. On the other hand, the right wing lacks alternatives and simply engages in demagoguery. In fact, their austerity and privatising policies under Rajoy have, for decades, largely been responsible for the pitiful state of public health in the Community of Madrid, as well as in other regions.

We as Lucha de Clases (the Spanish section of the IMT) insist that measures must be strengthened in the face of the oncoming disaster. We do not agree with the government’s decision to prioritise the economic system over our wellbeing. The government’s most conservative and pro-capitalist wing, headed by Minister Nadia Calviño, has completely hijacked the government. Our comments are more than warranted. If saving lives is the number one priority, that hasn’t been made clear: why is it that citizens are being kept under a military quarantine, and why are the business owners free to decide who has to go to work and who doesn’t?

Of course, following the announcement of these economic measures, the capitalists are, above all else, considering how best to protect their money. These measures are a beacon of light for a bourgeoisie that hopes to come out of this unscathed (within the context of the overall financial disaster announced by the IMF). Other palliatives have been established which, at most, offer them the possibility to access moratoriums for bank debts (but no write-offs) and to file for an ERTE – a form of regulated temporary lay-off – which would entail a reduction of over 70 percent of the wage bill for the employer (as this would be picked up by the state). This paints a clear picture of the nature of the measures taken. It shows who is left with guarantees and who is doomed from the start. In these next few days, we will see the working class become inundated with temporary and permanent suspensions; these decisions have already been finalised by big business. Moreover, all the small workshops, retailers and distributors among others, which make up the petty bourgeoisie, are destined for economic ruin. 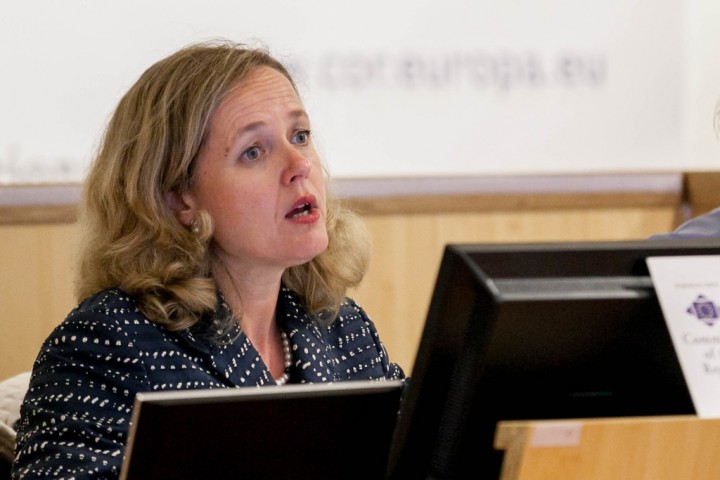 The government’s most pro-capitalist wing is headed by Nadia Calviño / Image: European Committee of the Regions, Flickr

Calviño has announced that they have “started working on a plan” with employers and unions, which would serve the interests of the most vulnerable members of society who are not part of any protection schemes, a plan which she claims is “still in its early stages”. The idea to impose a “total lockdown” was floated, but she made it very clear that “Spain must go on by any means necessary”. For now, it’s plain to see that this section of the government is the one in charge. It has forced the other sections of government, including Unidas Podemos, to follow its general guidelines to the letter.

The outlook for the working class is stark. Not only are they concerned about the spread of the coronavirus (and rightfully so), they are also faced with the bleak prospect of mass unemployment and cutbacks at every level. The IMF has announced that the economic impact of this crisis will far exceed that of the 2008, and workers are all too familiar with the effect this will have on working conditions.

Lucha de Clases maintains that, if the government and employers refuse to impose the total lockdown and continue to line their pockets, the working class will be forced to take exceptional measures. They will use their discretion and go on strike, if need be.

In light of the health crisis, which has been aggravated by cutbacks imposed in the past, there is no more appropriate measure than to completely stop all economic activity and allow only the essential sectors to remain in operation: health, energy, food and the administration of food and drugs. The health of the population must be our primary concern. It should rank higher than the economic concerns, which currently figure on the agenda of a government which, as we mentioned earlier, has been dominated by Calviño’s faction.

Shop stewards’ committees and unions at various other levels must formulate their own emergency plan, issue an order to cease all non-essential activity and reduce activity in all other sectors to the bare minimum. This is the only way to contain this emergency situation, since health workers already lack the means to deal with the onslaught warned of by Sánchez. We also demand that the government:

The working class must take charge of the situation by forming emergency committees in every sector. They must take control to reorganise essential activity for occupational safety reasons only. We need to demand access to company accounts in order to use all the profits gained during the recovery period to cover the costs incurred by the crisis. If these measures are not adopted, the situation will become dire and key sectors will close, seriously jeopardising basic supply.

It is vital that we avoid further chaos in order not to exacerbate the situation. Concern for the economy is what is putting the lives and wellbeing of millions of people at risk. Only by pursuing the interests of the working class internationally will we be able to rectify the situation and lay the groundwork for subsequent reconstruction with a broad plan created on behalf of all of society.

For us, these tasks indicate such an acute need for drastic change that we believe even the slightest political concern for capitalism from the government’s left-wing must be done away with. Military discipline exercised by Calviño does not benefit the left, nor does it benefit the working class, and would merely involve enduring the painful after effects of the disease. If the section on the far left of the government, Unidas Podemos, does not break with this discipline, it will soon be seen as an accomplice.

The political right licks its lips in anticipation of the returns to be made from the disaster. It panders to the masses and flaunts the idea of a total lockdown, knowing full well that the government would not dare put one in place. In contrast, we feel that the lockdown must be controlled by emergency workers committees which, following the disaster, must lead the way out of the chaos created by capitalism. A socialist government must stand by these organisations and help steer them in the right direction and submit to the will of the working class.