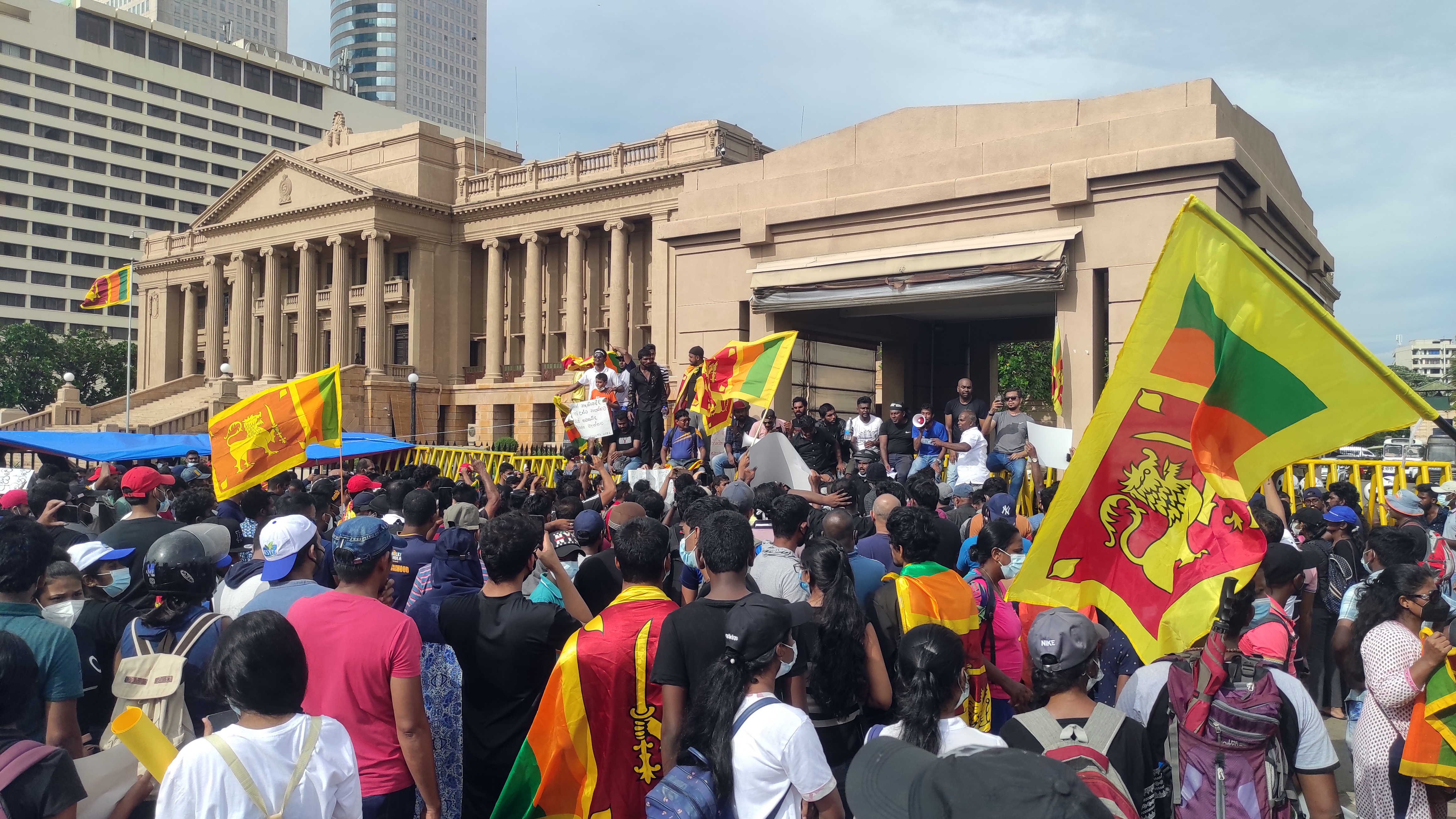 On Saturday 9 July, tens of thousands of ordinary Sri Lankans overcame transport chaos to descend on the capital, Colombo. Police barricades were swept aside like matchsticks, and the masses stood before the steps of the president’s official residence. And then, they surged forward. The masses, in the floodtide of their ‘aragalaya’ (struggle) suddenly overflowed the safe channels that the ruling class had erected to keep them out of politics. Within minutes, thousands of people had taken over the presidential residence. Within hours, the president-in-hiding was forced to name the date of his resignation.

Three months after spontaneous protests erupted demanding the downfall of the president, and exactly two months to the day after the masses ousted his brother, the former Prime Minister Mahinda Rajapaksa, the struggle is on the cusp of achieving its main stated aim: ousting the hated president Gota Rajapaksa.

This is a tremendous victory that has shown the masses their immense power - not just in Sri Lanka, but over the whole globe. Now, the ruling class are scrambling to put in place a government of ‘national unity’ to replace the Rajapaksa dynasty. Its aim will be to use smiling faces to deceive the masses and to rob them of their victory.

The question will quickly be posed: with Gota gone, where next for the aragalaya?

Over recent months, Sri Lanka has seen a frightful economic collapse. The combination of the crisis of capitalism that erupted with the pandemic, and the stupid mismanagement of the arrogant Rajapaksa clique has plunged the nation into chaos.

The country’s foreign currency reserves have all but evaporated. Without hard cash to import basic goods, Sri Lanka has run out of fuel to run generators, in addition to cooking oil, baby milk, and even basic medicines and paper. In the hot summer weather, long blackouts became the norm. Inflation is officially over 50 percent, but for the most basic goods it is far, far higher.

The unbearable suffering of the masses was what led to the spontaneous eruption of anger in late March demanding the removal of Gota and the entire Rajapaksa dynasty. In April, the struggle escalated to the permanent occupation of Galle Face Green, opposite the president’s office and official residence. For a full month, the people peacefully occupied the green outside the presidential residence, without achieving their aims. And then, on 9 May, a month into the struggle with tiredness setting in, Prime Minister Mahinda Rajapaksa attempted to use lumpen gangs to drive the people off the street. But the whip of the counter-revolution only spurred the revolution on. On that day, the people took the first scalp of a Rajapaksa as Mahinda was forced to resign.

But if Gota thought that sacrificing his brother would settle the situation, he was gravely mistaken. Two months have passed since Ranil Wickremesinghe took the top cabinet position in place of Mahinda Rajapaksa, and the situation of the masses has only become more dire.

In mid-May, the government announced that it would default on its debt. Despite one price hike after another, in June, the government announced that the country was essentially out of fuel. Fuel sales for all but emergency vehicles were banned. To eat, people must work. But how can people work without being able to drive to their jobs? For many, the ban was a demand that they starve.

The slightest rumour that fuel was to be delivered at a petrol station led to kilometre-long queues forming. Queuing for a day or even for several days became the norm. These queues have become the regular sites of spontaneous outbursts of anger and of clashes between the army and the people over the past month.

The people arrive in their thousands

Although the permanently established protests had shrunk, it was inevitable that the simmering anger in society would boil over at some point. The people simply cannot go on as before. On 9 July, a boiling point was reached with the monster march in Colombo.

Tens of thousands of people ignored Gota’s latest curfew to descend on the capital. They overcame severe transport difficulties to come to Colombo by any means necessary: by bicycle; on the back of fuel trucks; or clinging to the outside of trains (an increasingly common sight as public transport is overwhelmed in the absence of fuel). There were jubilant scenes as trains passed each other, each laden with thousands of men and women, waving flags, all heading to Colombo.

Thousands more who were unable to make the trip to Colombo protested in cities across the country, from Kandy and Kotagala in the Central Province, to Kurunegala in North Western Province, to Jaffna in the Tamil-majority North.

Whilst the protests were met with tear gas, water cannon and vicious attacks from the security forces - particularly the hated STF who carried out a brutal attack against a group of journalists - elsewhere it was clear that the mood of anger had even infected some sections of the police and army. In one location, a police officer was recorded throwing off his helmet and joining the chanting marchers, whilst elsewhere a group of soldiers were seen marching through a jubilant crowd with flags flying overhead.

These scenes were the prelude to dramatic events as the masses stormed the presidential residence on Saturday afternoon. In every revolution, there arrives a point when the masses lose their fear. Having braved humiliation, and the bullets, batons and tear gas of the regime, they now stood at the threshold of the building that they were forbidden from entering. In a mighty surge, they stormed the presidential residence.

After a period of jubilation and chanting, the masses looked around and found themselves in the lap of luxury. One apparently on-duty police officer sat at the president’s piano to play a tune. In the open courtyard, dozens of protesters cooled off in the president’s private swimming pool.

Others took turns jumping on the four-poster bed that the president had presumably slept in until very recently. In the garage, the people found a whole fleet of luxury cars - all of course, with tanks filled with the petrol that the masses were banned from buying even at extortionate prices. In one room, the people even found stacks of several tens of million rupees, which Gota had presumably left behind as he hastily took flight from the people!

Sri Lankan protesters stormed the residence of the President and are swimming in his pool pic.twitter.com/qbVFgIAG5f

Meanwhile, dozens of ordinary citizens took turns to get their picture taken in Gota’s seat. Gota himself was nowhere to be seen, although rumours circulated of his attempted flight from the country.

Up the road, another large crowd stormed the official Temple Trees residence of Prime Minister Ranil Wickremesinghe, whilst his own private residence was burned down under strange circumstances a few hours later.

In a state of panic, the leaders of all the parties - from the governing SLPP to the opposition parties including the SJB - came together to resolve the crisis. At their behest, the Prime Minister Ranil Wickremesinghe offered to tender his resignation in favour of an ‘All-Party Government’. By evening, Gota himself had promised to resign by Wednesday 13 July.

That night, outside the occupied Temple Trees building, the masses sang ‘Bella Ciao’ - the song of the Italian anti-fascist partisan movement of the 1940s, which is today being revived as a song of revolt all over the world.

World renowned Bella Ciao,reversioned to sinhala,was performed by Indrachapa Liyanage & Samanalee Fonseka tonight in 'Aragala Gee Sandawa" held at Temple trees celebrating the occupancy of all this places by people of #SriLanka

This is clearly a massive victory for the masses in struggle. But if Gota does indeed resign tomorrow as he has promised, this only poses new questions for the aragalaya: the first of which is, who or what will replace him? Discussions are now underway between politicians over just that question. The name of the speaker of the house has been mooted as an interim President, as has that of the leader of the official opposition, the SJB’s Sajith Premadasa.

Some from within the movement, such as the lawyers’ Bar Association, have attempted to sow illusions in a “national unity” government to bridge the crisis: to reform the constitution; to negotiate an IMF bailout; and to prepare new elections.

But whomever parliament chooses, on the basis of the capitalist system to which all the parties in parliament are intimately tied, the crisis in Sri Lanka will only deepen. The masses have shown a healthy scepticism to all the parties from the very beginning of the aragalaya. From the beginning, the slogan “Go Home 225” has been raised - i.e. go home all 225 MPs in the parliament, who are seen by the majority as just as rotten as the ruling clique.

The crisis that Sri Lanka is traversing is at bottom a capitalist crisis. And far from easing off, it is only becoming deeper. Two years after the most severe crisis in capitalism’s history, the world is once more heading towards a deep recession. Combined with spiralling inflation, which is deepening the debt burden of poor and so-called ‘emerging’ economies, a new collapse of exports will only further aggravate the depletion of foreign currency reserves. And this will take place not in one or two countries, but across entire swathes of the globe.

As an analyst at the Financial Times explained:

“Sri Lanka right now is shaping up to be the canary in the coal mine for what could become a global crisis of large numbers of developing countries saddled by a lot of debt, unable to pay this debt…”

Countries as far removed as Argentina and El Salvador, Egypt and Ghana, Pakistan and Laos are facing potential bankruptcy.

Bloomberg has warned that a “historic cascade of defaults is coming for emerging markets”, and has named 19 countries where yields on government bonds are in excess of 10 percent, an indication that those countries are in deep debt distress.

These countries are home to 900 million people and owe a combined total of $237 billion to foreign bondholders, or almost a fifth of emerging market debt denominated in dollars, euros or yen. This is a stick of dynamite in debt markets that is set to go off just as the world slides towards recession.

The deepening crisis all over the world will force the masses to take the road of revolution in one country after another. The Sri Lankan masses have set an example in terms of how to struggle. Their example will be replicated in one country after another in the coming period. But whilst Gota is gone, the Sri Lankan ruling class remains in the saddle.

A government of ‘national unity’ will rule in their interests. It will work hand-in-glove with the IMF in an attempt to restore economic equilibrium at the expense of the working and middle classes. From this government, all of the parties and institutions of Sri Lankan capitalism will emerge utterly discredited. The masses will be forced to take their aragalaya onto the streets once more. In the course of their struggle, through their partial conquests and setbacks, broader and broader layers will begin to draw the conclusion that their suffering can only be ended by overthrowing capitalism itself.

But to achieve this, the mass of workers in Sri Lanka need their own political voice, their own party that can explain that what is required is a socialist revolution. The wealth of the rich must be taken over for the benefit of the working people. The masses who took over the luxurious palace of the president have seen that the wealth is there. The problem is that it is in the wrong hands.