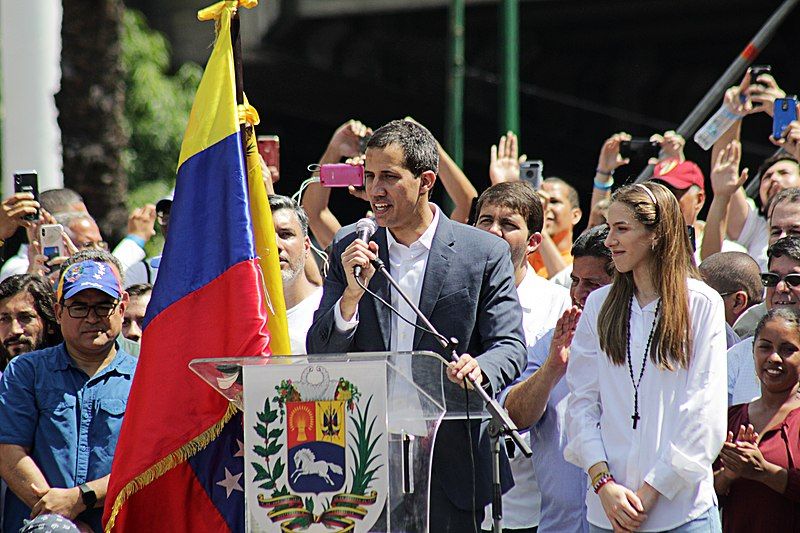 The self-proclaimed “Interim President” of Venezuela Juan Guaido is attempting to carry out a military coup, “Operation Freedom”, as he has named the “final phase” of his attempt to remove Maduro. He is joined by Leopoldo Lopez, who was freed by a handful of police and armed forces from house arrest early this morning. It is “an all-or-nothing move”, as some have described it.

Together with a small military force they attempted to take La Carlota airbase in eastern Caracas. From there, they issued an appeal to the armed forces of Venezuela to join them in their attempt to overthrow the Maduro government. Gunfire was heard being fired outside the airbase, in what seems to have been an exchange between Guaido’s supporters and soldiers loyal to the government.

It seems that some people may be responding to Guaido’s call – although at the moment the situation is not clear – and are coming out onto the streets in Caracas and around the country. The latest unconfirmed reports seem to indicate that a civilian crowd has now entered La Carlota military air base.

After having failed earlier this year, it is clear the right-wing Opposition are desperately trying to regain the initiative. “It’s now or never,” one of the young soldiers backing Guaido, is reported as saying.

Meanwhile, the President of the National Constituent Assembly, Diosdado Cabello, speaking on national state TV, has called on the government supporters and the Bolivarian militia to come out and defend Miraflores Palace, while Maduro, after speaking with military leaders says they expressed “total loyalty to the People, to the Constitution and to the Fatherland.”

#HandsOffVenezuela | President of the National Constituent Assembly (ANC) of Venezuela @dcabellor: "We are a conscious, warrior and revolutionary people. Imperialism can understand it however it wants, but to the Palace of Miraflores they will never return. 10:30am Local time. pic.twitter.com/j3zUNjUVsO

Whether the coup will succeed or not, we will see in the coming hours. But US imperialism has already expressed its support. US national security adviser John Bolton has tweeted “The [armed forces] must protect the Constitution and the Venezuelan people. It should stand by the National Assembly and the legitimate institutions against the usurpation of democracy. The United States stands with the people of Venezuela.” And Luis Almagro, secretary-general of the Organisation of American States (OEA), has also gone on Twitter to express his support for the coup.

It is clear from these events that the Opposition, backed by US imperialism and all that is reactionary across the Americas, is not going to give up in its attempt to remove the elected government of Venezuela. It also shows that no amount of appeasement is going to remove this problem. Guaidó should have been arrested after his previous attempt to launch a coup, as we explained at the time.

The Opposition, led by Guaido’ and Lopez, is hoping that the economic crisis gripping Venezuela will provide them with the mass support they require to successfully complete their plans. No compromise with these reactionary right-wing elements is possible. Either the Maduro government completes what the Bolivarian Revolution began under Chavez - by expropriating the properties of the major corporations operating in Venezuela together, with that of the big landlords, and placing them all under the control of the revolutionary masses - or they leave things as they are, thus facilitating victory for the right-wing coup plotters. If these people come to power, they will destroy what is left of the reforms carried out over the past 20 years.

All the forces of the revolution must be mobilised to stop this coup. Imperialist hands off Venezuela! The masses must complete the revolution now, or eventually succumb to black reaction: there is no other way!

[Updates to come as the situation unfolds.]