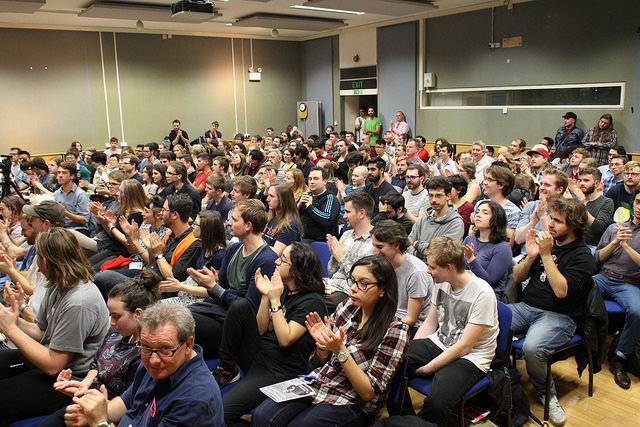 The weekend of 21-23 October saw the most successful school ever for the Marxists in Britain, as over 250 revolutionary activists came to London from across the country – and Europe – to take part in the REVOLUTION! festival, hosted by Socialist Appeal and the Marxist Student Federation.

Alongside the record high numbers in attendance, of particular note was the equally impressive high level in terms of the political discussion over the course of the three-day event. All of those who came spoke enthusiastically about all the sessions, not only in terms of the talks by the speakers, but also in relation to the plethora of interesting and insightful contributions from those in the audience.

This high political level on display was all the more impressive given the relatively youthful age of the attendees, with the vast majority of those who came being young students who have been drawn into revolutionary activity recently through the 30-or-so Marxist societies that now exist in universities and schools across the country under the umbrella of the Marxist Student Federation. And as Lenin, the great Russian revolutionary, was fond of saying: he who has the youth has the future!

The weekend began in an inspiring manner with a rousing introduction by Esteban Volkov, the grandson of Leon Trotsky, who joined a 175-strong audience via video link from Mexico on the Friday evening for the official launch of the Well Red publication of Trotsky’s biography of Stalin.

Esteban began by offering his thanks to the comrades from Well Red and the International Marxist Tendency for their work in restoring his grandfather’s magnum opus. Volkov then went onto explain the importance of Trotsky’s Stalin, discussing the author’s vital leading role in the Russian Revolution and – importantly – in analysing the causes of the later degeneration of the Soviet Union. Most importantly, Esteban ended by saying, we must use Trotsky’s writings and ideas as inspiration in the fight today for genuine socialism. Needless to say, Esteban’s words were met with thunderous applause.

Esteban was followed by Rob Sewell, editor of Socialist Appeal, who explained the history of the new Well Red publication, and how the missing elements of Trotsky’s masterpiece were pieced together from the archives and painstakingly reinserted into the book with the help of much blood, sweat and tears. It was clear to those listening that the final product, which has taken years of work to carefully reassemble, is the result of a tremendous labour of love.

The book launch was completed with an in-depth contribution from Alan Woods, the editor of the Well Red Stalin release, who explained the historical context to Trotsky’s work. Alan gave an overview of Leon Trotsky’s analysis about the role of Stalin and how this seemingly mediocre individual had risen to power as the representative of the cancerous bureaucratic caste which grew out of the isolation of revolutionary Russia.

Alan summed up his speech by stressing that, whilst Trotsky’s life may have been brought to an early end by a Stalinist assassin, his revolutionary ideas cannot be killed. These live on today in the form of the International Marxist Tendency. The task ahead is to turn these ideas into a material force capable of transforming society.

The Saturday of the weekend school saw a number of political discussions on a broad range of subjects – from a talk on “what will socialism look like?” to an introduction to the Marxist view of history. Particularly popular were the sessions on “women, the family and the Russian Revolution”, in which Emily Cosentino of the Bristol Marxists explained the gains made by women as a result of the Bolshevik revolution of 1917, and on “the dialectics of nature”, in which Ben Curry of the Leeds Marxists took the audience on a rollercoaster ride through a history of scientific thought. Thomas Soud from the Warwick Marxists gave this report of the session on dialectics, science, and revolution:

"Perhaps one of the most surprising aspects for some newcomers to the study of Marxism and revolutionary thinking would have been hearing the Marxist perspective of Nature, science and change. Why bother to consider the relationships between solid and liquid, space and time, life and death whilst capitalism is dying around us? Yet, these questions were exactly what Revolution! was unafraid to discuss. How can one envisage the natural sciences using the Marxist method of dialectics? What conclusions can we draw?

"The discussion was led by comrade Ben Curry, who eloquently explained the key concepts of Marxist philosophy - dialectical materialism. Ben explained that whilst the formalistic schools see the world as static, comprised of individual parts that are as a whole nothing more than their sum, dialectics abandons such a point of view. Everything is in motion, in a process of evolution and change. The world is not understood by its discrete parts, but by the interaction between these. Heraclitus said “No one steps into the same river twice” and Hegel demonstrated the power of the dialectical method; but it was Marx and Engels, basing themselves on the accumulated scientific knowledge of previous generations, who put the philosophy of dialectics on a materialist basis.

"With this revelation we saw dialectics change to dialectical materialism; to a philosophy which saw history not as a clash of ideas or of great men, but of class forces, bounded by their material and economic conditions. As many noted in the discussion, only under socialism will we see a society where human potential and scientific discovery can be revolutionised once again."

Meanwhile, Maciej from the Swansea Marxists, gave this report from the session on "Corbynomics, Keynesianism, and capitalist crisis":

"I was really excited to go to my first Revolution! festival. I decided to attend a range of seminars on topics which I was interested in, as well as those I still had a bit to learn about. I was especially impressed with the level of discussion - I've attended many similar events in the past, but these were definitely the most educational and interesting. The knowledge of theory from the speakers and those involved in discussion was incredibly impressive, and what followed was an inspiration - not only to learn more about Marxism, but also to use this knowledge to build the forces of Marxism in our areas.

"The session about Keynesianism and social democracy was especially interesting and productive. During the discussion, the speaker and contributions completely debunked the tactics and ideas of reformism, and the session was very successful at reassuring my curious friends about Marxism. One said it was the final nail in the coffin in relation to his confidence in social democracy; and he ended up buying several Marxist works at the Well Red bookshop straight after!"

Ending Saturday’s discussions was a plenary in which Fred Weston, editor of www.marxist.com, gave an overview of British political situation, including the splits and crises facing the ruling class following the Brexit vote, and the perspectives for the Corbyn movement and the civil war in the Labour Party. Numerous speakers from the floor added to Fred’s analysis, with contributions on the forces behind the rise of the far-right across Europe, the prospects for the class struggle in Scotland, and the real meaning of the purge of socialists from the Labour Party by the Blairite bureaucracy.

After Fred’s summary, the packed room decanted to the bar for a revolutionary social and a relaxing discussion over a few drinks about the day’s events.

Sessions resumed on Sunday with yet more variety of discussions, spanning from a talk by Hans-Gerd Öfinger of the German Marxists Der Funke on the rise of fascism under Hitler, to an overview of Trotskyism by Jorge Martin of the IMT. Popular sessions on the Sunday included Hamid Alizadeh’s introduction on the philosophers of Ancient Greece and Daniel Morley’s talk on “workers’ democracy, control, and power”. Luke from Brighton provided the following report of the very interesting discussion about “the race against the machine: automation and technology under capitalism”:

The “race against the machine” talk given at the Revolution! festival was an extremely good summary of exactly how capitalism had at first acted as a catalyst for innovation, but had then become, as Marx himself put it, a fetter on technological development. We see this in many different aspects of life that we now consider normal – for example, different phones having different (incompatible) chargers, to larger things such as private research teams not being allowed to share their research notes; both of which are a direct result of capitalist competition

The discussion also highlighted the underlying inherent contradictions within capitalism. As technology continues to advance and productivity increases, the amount of labour from the working class is reduced; on the face of it, this sounds like a wonderful thing – less work to do, more time for leisure! But under capitalism, this results in economic collapse, with a massive rise in unemployment, and the workers themselves no longer having the wages to buy products from capitalists!

A number of examples were given showing how we have the means to abandon manual labour, but since it is not profitable to do so, we are forced to continue to toil away. Only with the elimination of private property and markets can we make full use of the fruits of our own scientific achievements.

Build the forces of Marxism! Build the IMT!

The weekend’s closing remarks were given by Alan Woods, who discussed how we are seeing ever greater symptoms appearing across the world of the system breaking apart. All of these signs, Alan stated, are an indication that a fundamental change is needed in how society is run. The process will not be a smooth one, Alan explained, but will be turbulent and volatile, with swings to the Left and to the Right, as the masses search for an alternative to the crisis-ridden capitalism system.

Above all, Alan stressed, it is the missing subjective factor that is leading to this drawn out and turbulent process; that is, the absence of a revolutionary leadership that can provide a real explanation for society’s ills and offer a way forward. That is the primary task facing us in the period ahead: to fight for revolution; to build up the forces of Marxism; to build the IMT.