Share
Tweet
We have just received the sad news of the death of Terry Fields, a Militant supporter and Labour MP for Liverpool Broadgreen (1983 -92). He died over the weekend after a long struggle with cancer. Terry is remembered by all the comrades who knew him as a true class fighter and a man who stuck to his socialist principles throughout.

We heard the sad news that Terry Fields, Militant supporter and MP for Liverpool Broadgreen (1983 -92), has died over the weekend after a long struggle with cancer. 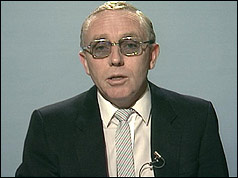 Terry was a larger than life figure and a fine representative of the Liverpool working class. A ‘salt of the earth' man who dedicated his efforts to the cause of the working class. Always smiling and joking, he was always seen wearing his black leather jacket, even in Parliament, a place he pretty much hated. He served his time there from 1983, when he was elected along with Dave Nellist and later Pat Wall as part of the Militant trio, until 1992. This was the culmination of decades of work by Militant supporters in the Merseyside labour movement. They had refused to abandon the struggle within the Labour Party.

As a militant trade unionist and firefighter, Terry was elected to the executive of the Fire Brigades Union. During the 1977 firefighters' strike he joined Militant. Through his work, he was selected to become the prospective Labour candidate for Kirkdale when the sitting member, James Dunn, left the party to join the Social Democratic Party. With the reorganisation of the parliamentary boundaries, a new constituency was created, Broadgreen, in which Terry was selected as the candidate. He went on to take the seat for Labour in the 1983 general election, despite the defeat for Labour on a national scale. As with the other comrades, Terry stood on a socialist programme and held to the socialist principle that he would live on the average wage of a skilled worker, in his case a firefighter. The rest of his parliamentary salary would be put back into the labour movement.

During the election campaign he was told: "Just promise me one thing - you won't change." Terry replied: "Many have said it before, but there's no way I'll change. I've got no pretentions to enhance my own life style on the backs of working people, when you see the conditions and the support that they've given me." And this was true. He stuck by his principle to the very end.

The election in Broadgreen in 1983 was hugely important as, in the midst of Thatcher playing the Falklands card to the maximum and the Labour Party being undermined by the treachery of the right wing, a new candidate putting forward a socialist programme increased the Labour vote, while elsewhere it collapsed. This put the lie to the argument of the right wing that Labour's relatively left-wing manifesto was the "longest suicide note in history."

At the time, I was national organiser of the Militant Tendency and was responsible, with a team of comrades, for overseeing our parliamentary work. I remember Terry and Dave at the first meeting we had to discuss the work. It was new unchartered waters for us and we had to plan the work with dedicated teams of comrades not only in parliament but also in the constituencies. How the MPs would work in and out of parliament was discussed. It was essential to be a tribune of the working class, which Terry was keen to perform. He spoke occasionally in parliament, but most of his activities were outside, addressing labour movement meetings, visiting picket lines, etc.

Terry's whole manner and friendly approach made it difficult for our enemies, as he did not fit into the stereotype and he was obviously not a careerist. Everyone who knew him have the abiding memory of Terry patiently listening to workers or constituents and quietly discussing the issues with them - a true workers' representative.

At the same time as his election to parliament, the left won a majority on the Liverpool City Council, with its Militant deputy leader Derek Hatton. Terry played a key role in the struggle of the Liverpool City Council, standing shoulder to shoulder with the working class of Liverpool against the Tory government. Again this position was built up over years of patient work in the Labour Party, initially against the right-wing Braddock machine which controlled the party with a Stalinist grip.

Terry also threw himself into supporting the miners' strike in 1984-85, speaking in the coalfields and elsewhere. Terry truly hated the ruling class and their acolytes. The class struggle was everything to him, and showed how the working class would not only resist the system, but would eventually show the socialist way forward for society. What a total contrast with the rarefied atmosphere of the House of Commons! That was why Terry hated going to parliament. He was like a fish out of water under these conditions.

Terry addressed all the Militant Rallies up and down the country as well as in the Albert Hall. I recall that Terry often opened up a speech with a joke, such as "I would like to extend greetings from the Parliamentary Party. I would like to, but I can't." However, with the witch-hunt in progress, and the editorial board being expelled in 1983, the bureaucracy started to tighten the reigns. The MPs were warned not to speak on Militant platforms. Then, at one national meeting, Terry appeared on the platform, to everyone's merriment, with a paper bag over his head, with the eyeholes and mouth cut out and his glasses on. It was a typical Terry Fields' stunt! He simply ridiculed the powers-that-be and their bureaucratic dictates.

In the general election of 1987, Terry again increased his majority, while Labour under Kinnock was massively defeated nationally. Considered a Tory marginal in 1983, Terry's majority increased from 3,800 votes to 6,047, some 48.6% of the vote. The right wing were stony silent about this remarkable victory and simply repeated the lie that socialist policies were unpopular.

Terry also played a prominent role in the campaign against the poll tax which advocated non-payment. Millions refused to pay the tax which ended with Thatcher's resignation. Terry refused to pay his poll tax and was jailed on 11th July 1991 for 60 days, the only Labour MP to have been jailed for non-payment. Comrades held regular protests outside the prison until his release.

In 1991, the Militant Tendency was thrown into a heated faction fight over whether or not to abandon our long-term work in the Labour Party. This became known as the ‘open turn' debate.

The whole episode really took off with the Walton by-election in Liverpool. The left-wing MP, Eric Heffer, had died. The left had put up Militant supporter Leslie Mahmood as their candidate. She was bureaucratically denied the position and Peter Kilfoyle, the regional organiser and arch witch-hunter on Merseyside, was chosen instead. The leadership of Militant were under pressure to stand independently as a "real" Labour candidate. Myself and Ted Grant opposed the idea in a special meeting in Liverpool. We were isolated and the decision was taken to stand, which threatened 40 years of work in the party. The fact that the MPs could be expelled as a result was of no consequence.

Whether the Militant MPs would have avoided expulsion without Walton it is not possible to say. Walton, however, made it inevitable.

After a massive campaign to get Leslie elected, on polling day some 2,700 people voted for the "real" Labour candidate. The disappointment was palpable. Kilfoyle had won comfortably. Ted Grant and myself urged the comrades to reconsider their position at a national meeting called just after the by-election result, but they would hear nothing of it. For them, it was a great "success" and we should consider developing this further on the same lines, starting with an open organisation in Scotland.

The Walton fiasco was, as predicted, used by the Labour bureaucracy to push through expulsions, including the Militant MPs. The soft left capitulated. One of these was NEC member, Clare Short MP. She had made up her mind to support expulsions after Walton, not only of those involved in Leslie Mahmood's campaign, but also of the two Militant MPs (Pat Wall had died in 1990). "The most difficult task I have ever undertaken as a member of the NEC was the action we took to declare Dave Nellist and Terry Fields unsuitable as Labour MPs... The decision was difficult and painful - not least as the two did not admit they were members of Militant."

On 24th July 1991, a few weeks after Walton, Labour's NEC suspended 85 party members and decided the cases of Nellist and Fields would be handled in September. Both were later expelled by Labour's National Constitutional Committee. In the general election of 1992, both lost their seats - Terry to Jane Kennedy.

We salute Terry's courageous stand while he was a Member of Parliament and his years of effort both supporting and leading the working class. In Terry's immortal words, "A Militant is a moderate who has got off their knees." He was an honest class fighter and will be remembered for this.

The editorial board of Socialist Appeal wishes to extend their condolences to Terry's wife and family. Terry leaves widow Maureen, 68, children Denise, 48, Michael, 45, and Paula, 40, Stephen, 37, and 10 grandchildren and a great-grandchild.