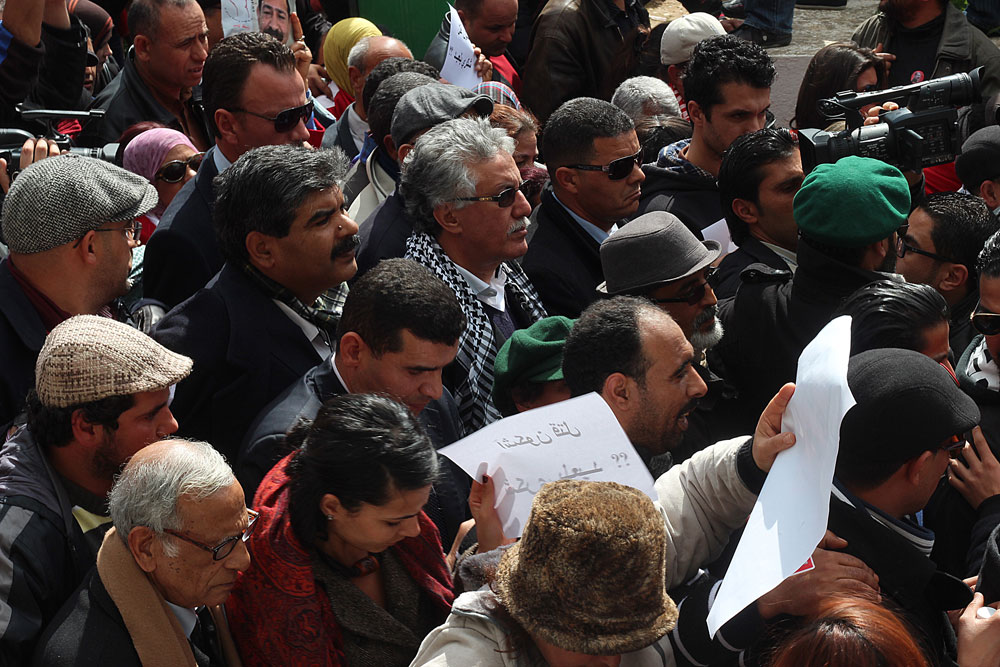 On the morning of Thursday, July 25, left wing nasserite Constituent Assembly member Mohamed Brahmi was assassinated outside his home in Tunis. A protest general strike has been called by the UGTT union, while the Popular Front has called for mass civil disobedience to bring down the government and disband the Constituent Assembly.

The assassination of Brahmi, a leading member of the nasserite Movement of the People, had the same modus operandi as the assassination of Chokri Belaïd on February 6. Two men in a motorbike waited outside his home and shot 14 bullets into the body of the Constituent Assembly member. There is no doubt that this is a politically motivated assassination and Brahmi's family and comrades have pointed the finger at the ruling Ennahda Islamist party as being guilty for his assassination. This was the same accusation made at the time of Belaïd's assassination, whose killers have not been yet brought to justice. The assassination was preceded by statements of Ennahda leaders that they would fight to defend “legitimacy” to the last drop of their blood. This is a clear incitement to violence in the aftermath of the overthrow of Morsi.

Angry mass demonstrations quickly emerged throughout the country. At first hundreds and then thousands of people, mainly very angry youth, gathered at Bourghiba Avenue, the site of the huge demonstrations which brought down Ben Ali in 2011. Incredibly, they were met with tear gas and brutal repression on the part of the police. This did not deter the demonstrators who remained in the streets until the early hours of Friday, some of them marching towards the National Constituent Assembly shouting "degage" - which means 'out' - the slogan of the Tunisian revolution.

There were also demonstrations and clashes with the police in Bizerte, Gafsa (where the Army opened fire with live ammunition), Redeyef, Siliana, Sfax, Djerba, Beja, Kasserine and many other cities and towns. In Sidi Bouzid, the birth place of Brahmi, where the revolution started in December 2010, the masses burnt down Ennahda offices and set the regional governorate on fire. There are reports that authorities have been replaced by a "citizens committee".

Youth participating in the protests in the capital Tunis announced that groups of revolutionary youth from Gafsa, Sidi Bouzid and Sfax were already moving towards the capital. "We will not go away until Ghannouchi goes away never to return" said one of the leading youth activists Mohamed Maaroufi, referring to the leader of the ruling Ennahda party. The mood which is developing is clearly insurrectional. The recent revolutionary events in Egypt which have led to the overthrow of Morsi have captured the imagination of the Tunisian masses which are facing similar conditions. A Tunisian "tamarrod" (rebelion) movement has been created and it claims to have attracted 850,000 signatures in just a few days for a petition demanding the overthrow of the government and the National Assembly.

The roots of this are to be found in the accumulation of anger at the fact that none of the demands of the revolution ("bread, jobs, justice") have been met and in fact the situation has actually worsened. Youth unemployment has increased, there has been a general deterioration of the economic situation, with rising inflation. There has been no justice for the martyrs of the revolution and the Constituent Assembly has not even delivered a Constitution after nearly two years, when it was originally supposed to draft one within one year.

The troika government, an alliance of the Islamist Ennahda with the bourgeois liberal CPR and the "Social-democratic" Ettakol, has been completely unable to address the deep crisis of the economy and has become paralysed.

It is this discontent which came to the surface at a series of regular intervals in the last 2 years. A wave of regional general strikes and uprisings in November-December. These were not just normal strikes. In many cases they acquired insurrectionary proportions, with workers and youth blockading the main roads and basically taking power for periods of time in different regions. As well as social and economic demands, the masses were enraged at the constant provocations of Islamic fascist gangs against the left and the workers' movement, including an attack against the headquarters of the UGTT. These attacks were carried out by the so-called "Leagues for the Protection of the Revolution", linked to the ruling Ennahda party.

In the end this movement forced the UGTT to call a national general strike. But the national leaders of the UGTT feared that a national strike would pose the question of "who rules the country?". These leaders therefore reached an agreement with the government and called off the general strike at the very last minute. The agreement was supposed to include a full investigation on the activities of the LPR gangs. But this never happened.

Then, the assassination of Chokri Belaïd, the leader of the United Movement of Democratic Patriots, on February 6, provoked a new revolutionary explosion. A general strike was declared and there were demonstrations and clashes with the police everywhere. On the day of his funeral a huge crowd of over 1 million people paid tribute to the left wing leader and shouted slogans against the ruling troika and particularly the Islamist Ennahda. In some cities, the masses took direct action to disband the LPR gangs and close down their offices, as well as burning down offices of Ennahda. The mood was clearly insurrectionary.

However, once again, no-one gave this movement a clear perspective. The leaders of the Popular Front talked about the need to remove the troika government, but no clear indication was given as to how this was going to be achieved. The masses, without any clear leadership and perspective eventually went back home as the movement died down. At that time the call should have been for the continued general strike throughout the country and the formation of revolutionary committees at all levels taking power away from the government. Such committees should have been brought together in a national revolutionary assembly to take power.

Because of the lack of any leadership, the troika, which entered into crisis as a result of the movement, managed to stay in power, by default. They went ahead and formed a new government, which was basically the same as the previous one. Nothing changed.

Now the leaders of the UGTT have been forced to call a general strike for today, Friday 26. The problem though, is that the main leaders of the UGTT have no perspective for taking power and for the formation of a revolutionary government of the working people. They put themselves at the head of the general strike, which would have taken place anyway, in order to minimise its impact and keep the masses in check. This morning, as the masses were gathering outside the UGTT headquarters, general secretary Abbasi came out to address them. While he condemned the assassination of Brahmi, he failed to give any clear lead to the masses, not even naming the place and time for a demonstration. An activist present at the scene commented how "the masses can feel the betrayal".

The Popular Front has issued a statement in which it goes further than what it did in February in pointing out a way forward for the movement. As well as calling for a general strike for today and tomorrow (the day of Brahmi's funeral), it calls for mass civil disobedience "to impose the dissolution of the National Constituent Assembly." It further calls for sit-ins at the headquarters of all municipal, regional and national authorities. This is correct and would set the basis for replacing the institutions of the capitalist state – which is basically the same as the institutions of the Ben Ali regime - by revolutionary bodies at all levels.

A two day general strike is also a correct slogan, but it leaves open the question of what will happen from Sunday if the government is not overthrow. What should be raised now is an all out general strike, to accompany and strengthen the sit-ins, in order to bring down the regime.

However, what is the alternative offered by the leaders of the Popular Front? What is it that they ask the masses to fight for? Here is where the problems start. To quote from their statement they call for:

"The formation of the Supreme National Commission for National Salvation by representatives of political parties and civil society components which will, with the help of constitutional law experts, complete the drafting of the constitution"

as well as the:

"Formation of a government of national salvation" ... "headed by an independent national figure" which can "take emergency economic, social, political, and security measures and prepare for democratic, fair and transparent elections."

This reveals two things. One is the fact that the leaders of the Popular Front organisations, are imbued with deep illusions in bourgeois constitutionality. They demand a constitution drafted by representatives of "political parties and civil society components". But who is to elect these? Different forces in society, political parties, trade unions, bosses organisations, represent the contradictory interests of different social classes in society. How can they agree on a constitution which satisfies the demands of all of them? This is sowing very dangerous illusions in bourgeois constitutionalism and bourgeois democracy.

The other thing revealed by this statement is the fact that the leaders of the Popular Front are still firmly embedded to a two stage strategy of the revolution. They think that the immediate task of the Tunisian revolution is to establish "democracy" and that only later on can the issue of socialism be raised. The problem is that the urgent needs of the Tunisian revolutionary masses cannot be met within the limits of "democracy", which in reality is bourgeois democracy. What has been the problems of the last two and a half years which has created such a huge undercurrent of opposition amongst the masses? Was it the fact that the troika government was "incompetent"? The truth is that whatever the shortcomings of the government itself and the farcical behaviour of the Constituent Assembly, the main factor was the deep crisis of capitalism in Tunisia, which is aggravated by the crisis of capitalism in Europe and internationally.

The masses did not fight for democracy in abstract. They fought against the Ben Ali regime so that they could get bread and jobs. From the point of view of the workers and the poor, democracy only means something if it can deliver bread and jobs. Capitalist "democracy" is completely unable to do so in the present conditions in Tunisia.

The revolutionary strategy which is needed in Tunisia today is one which combines democratic and social, economic demands and links the achievement of these to taking of power by the workers and the power through democratic revolutionary committees.