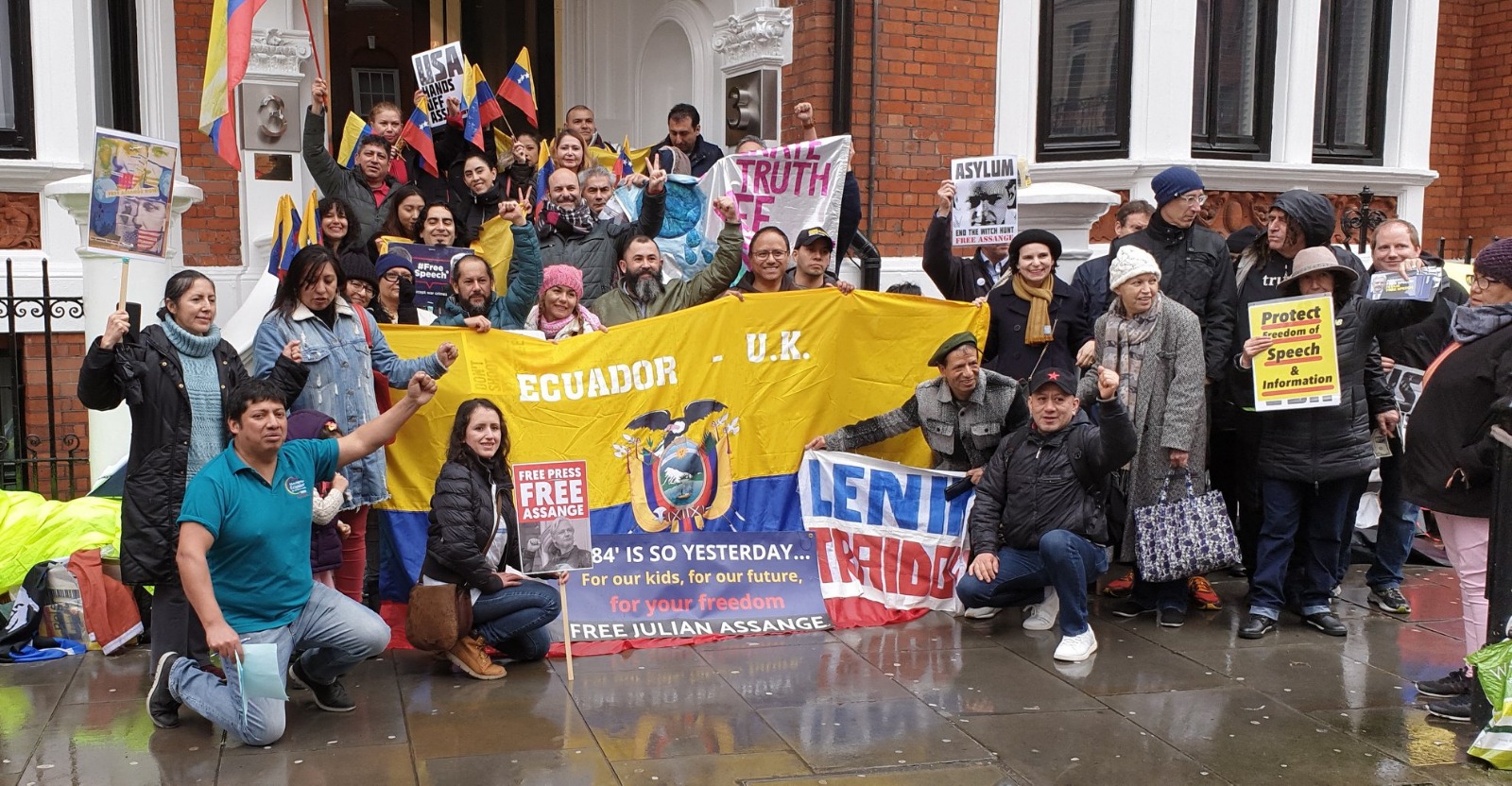 The President of Ecuador, Lenín Moreno, is threatening to expel whistleblower and WikiLeaks founder Julian Assange from the Ecuadorian embassy in London, where he has been for the last nine years, “within hours or days”. Moreno has accused Assange of leaking photos of the president and his family, along with intercepted private calls and correspondences. Moreno claimed on national radio that there were even “photos of my bedroom”, but has provided no evidence to substantiate his claims. This threat of expulsion is an assault on freedom of expression and should be resisted.

In truth, Moreno is calling to oust Assange in order to divert attention away from a corruption scandal he is currently embroiled in, which has led to a congressional investigation that could impeach him. The private correspondence that Assange is accused of leaking relates to the INA Papers, a dossier of files documenting the deposit of $18 million by the Chinese company Sinohydro into an offshore account connected to the president’s brother: Edwin Moreno Garces. These files implicate Moreno and his family in charges of money laundering, perjury and corruption. However, former Consul of Ecuador, Fidel Narváez says “not a single document, referring to INA Papers or the president’s family, has ever been leaked or published by WikiLeaks, let alone by Julian Assange”. Assange’s lawyer confirmed that his client was not responsible for publications anymore as “WikiLeaks has an internal organisation and Mr. Assange is no longer the editor.”

There is a more sinister reason why the Ecuadorian premier is trying to kick out his awkward house guest in London: Assange is a bargaining chip in a deal with the US for debt relief. In May 2017, Paul Manafort (Trump’s campaign manager) went to Quito ostensibly to broker a deal between Chinese energy companies and the South American nation. However, during negotiations, Manafort and Moreno also discussed a deal to hand over Assange to the US authorities in exchange for debt relief. Moreno also met with Vice President Mike Pence in June 2018, but they denied discussing Assange. Then, in August, the relief arrived, to the tune of $1.1 billion, conditional on the resolution of the Assange situation. In fact, the House Foreign Affairs Committee has said to Moreno that crucial bilateral relations in the area of commerce and security depend on “resolv[ing] the significant challenge” of “the status of Julian Assange” who they consider to be “a dangerous criminal and a threat to global security”.

If Assange is expelled from the embassy, UK authorities have confirmed that they will immediately arrest him for skipping bail from his arrest for rape. He will most likely then be extradited to the US to face trial in a kangaroo court for leaking information about the CIA and the Iraq War. Trump’s administration has persistently denied that the US is trying to extradite Assange for the leaks. However, in November 2018, Assistant US Attorney Kellen S. Dwyer inadvertently revealed in an unrelated court filing that “Assange has been charged.” It is likely that he will be sentenced to life imprisonment, if not the death penalty. As an indication of what treatment Assange may receive, his alleged accomplice in the CIA leak (known as the Vault 7 Publications), Joshua Schulte, is potentially facing 160 years in jail and has been subjected to degrading treatment whilst in detention.

As aforementioned, Moreno cannot legitimately expel Assange as he has no evidence to back up his accusation. Furthermore, Assange was given asylum and is protected by International Refugee Law which states that “refugees cannot be transferred to the state in relation to which they have refugee status”. The threat of expulsion is also a flagrant violation of the Interamerican Court on Human Rights ruling. Therefore, legally, he cannot be expelled.

If the UK police arrest Assange for bail evasion it will be on a technicality, as the Swedish Court closed the investigation into the rape case in 2017 with no charges made. The top prosecutor in Sweden, Marianne Ny, stated last year that the European Arrest Warrant had been rescinded due to Assange’s residency in the embassy making it impossible to conduct the court proceeding. In fact, they had wanted to rescind the arrest warrant in 2013 but the UK government insisted they continue. Assange has also said that he has always been willing to face any outstanding bail issues, but understandably not at the expense of facing extradition. Furthermore, the ‘crimes’ that the US wants him extradited for are not illegal. In 2017, WikiLeaks published thousands of CIA files revealing their efforts to infest technology, communications and even vehicles with viruses and malware, and is the largest leak in the history of the CIA. Publishing truthful information is not illegal. In addition, Assange is not even a US citizen, so he cannot be accused of treason or betraying his country. He is guilty of exposing the corruption and sinister nature of the state and with it the global system of capitalism. If he were to be extradited, his case would set a dangerous precedent for the extra-territorialisation of state secrecy laws. That is to say that the US could expand its judicial reach and extradite anyone who exposes state secrets, regardless of their nationality. This would be a massive infringement on freedom of expression, and the ability to criticise governments and speak out against corruption and state violence.

Moreno’s accusation is the latest scheme to rid himself of his Assange headache. On 28 March 2018, unilateral incommunication was imposed upon Assange for seven months. Three signal jammers were installed in the embassy to cut off his internet access, all visits to Assange were refused (except for legal counsel) and the embassy refused to provide information to allow Human Rights courts to challenge the legality of the imposition. Ecuador wanted to ban Assange from “intervening in countries’ politics and self-determination” which was clearly referring to Assange’s tweets in support of the Catalan independence movement. According to the Ecuadorian government, Assange’s behaviour on social media was “putting at risk [Ecuador’s] good relations” with “friendly nations”. That is to say Moreno, was embarrassed and under increasing pressure from his allies in Spain, the US and UK to shut up the whistleblower.

Assange has now been trapped in the embassy for seven years, during which time his health has deteriorated significantly. The UN stated that staying in the embassy “may… endanger his life given the disproportionate amount of anxiety and stress that such prolonged deprivation of liberty entails.”

President Lenín Moreno is under pressure. He has tried to get rid of Assange in various ways, to no avail. The US wants Assange handed over to make him pay for challenging their system and are leveraging Moreno with the promise of debt relief. Moreno also wants to bury the INA Paper scandal, which has further discredited his presidency. The former President Correa is attacking him for betraying his electoral programme and, in fact, his approval rating has plummeted to 17 percent.

Whistleblowers like Assange expose the real way in which the global capitalist system works. The ruling class belie their position when they say Assange is “a threat to global security”. What they mean by that is he represents a threat to their privileged existence with these exposing leaks. We need only look at the treatment of Chelsea Manning to see how severely the bourgeoisie reacts to such threats. Manning was sentenced to 35 years with dishonourable discharge for leaking footage of atrocities during the Iraq War to WikiLeaks. Whilst in prison, she was subject to nine months of solitary confinement in which she was kept in a cell for 23 hours a day, deprived of sleep and rest and even had her clothes confiscated. In fact, it is believed that she has been submitted to this treatment not only for ‘betraying’ her country (i.e. her ruling class) but as a way to get her to incriminate Assange.

The bourgeoisie are used to conducting their dirty dealings behind closed doors. Brave whistleblowers like Snowden, Manning, Assange and WikiLeaks drag all their dirty laundry out on display. This is a vital practice, as it allows people to question the validity and authority of our governments and the system they are based upon, which is exactly what the ruling class fears. Therefore, we must defend Assange from expulsion and extradition as part of defending the freedom of expression which is a basic democratic, human right.