Over the weekend of May 23 and 24, revolutionary Marxists from California, St. Louis, Minneapolis, Madison, Dallas, Kentucky, Ohio, Chicago, Toronto, Boston, New York, Philadelphia, New Jersey, Pittsburgh, and London gathered at the University of Pittsburgh for the 2015 WIL National School. Nearly 60 comrades attended this event, a clear indication of the enthusiasm for the ideas of Marxism amongst the comrades of the American section of the IMT. In the midst of dramatic movements around the world and in the USA itself, the success of this school reflects the need for a clear Marxist understanding of history and current events as the working class struggles to challenge the exploitation and oppression of the capitalist system.

The school opened with the reading of revolutionary greetings from sections of the IMT in Sweden and Brazil, which the gathered comrades welcomed enthusiastically. Many others were received from around the world. Following this, Fred Weston, editor of the In Defense of Marxism website and long-time veteran of the Italian and British labor movements, gave a presentation on perspectives for revolution in the United States and around the world. Fred’s talk covered topics from the organic crisis of world capitalism, to the relative decline of the power of American imperialism, to the revolutionary processes developing in places like Greece, Great Britain, and even Canada. Numerous comrades participated in the discussion that followed, including contributions about the situation in Cuba, Bernie Sanders’ campaign for President, the #BlackLivesMatter movement, and much more. We came away from this with a deeper understanding of the turbulent period that the world has entered and a sense of urgency to build the forces of revolutionary Marxism. 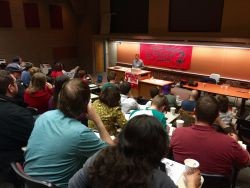 Following Fred’s talk and a break for lunch, the school resumed with an inspiring presentation by a leading member of the IMT’s Pakistani section, The Struggle, who now lives in Chicago. He spoke about the 1968 Pakistani Revolution, the growth of the Pakistan People’s Party, and the work of The Struggle today. The American Marxists keenly feel a great deal of responsibility to build our organization in the belly of the beast, given that American imperialism is ravaging Pakistan and has directly contributed to the hellish conditions for the masses of that country. We proudly salute our comrades in The Struggle and want them all to know that their work is a source of profound inspiration for us. In the course of the school, we sold many copies of the Pakistani Trade Union Defense Campaign’s newsletter to the school’s attendees, giving them a glimpse into the situation facing the vibrant Pakistani labor movement. Far from being nothing but a bastion of religious fundamentalism and backwardness—as the American media likes to portray—the Pakistani workers and peasants have marvelous revolutionary traditions. When the Pakistani Revolution reawakens, it will serve as a beacon of light and hope for all the workers of the world.

After the’s presentation, comrades listened intently as Fred Weston gave a detailed update of the activities of the IMT around the world. We understand that capitalism is a global system, and in order to defeat it we will need to build powerful revolutionary parties in every part of the world. This work is well begun in more than 30 countries around the world, from Nigeria to New Zealand, Indonesia to Italy, and the American comrades welcomed every advance of our organization with tremendous enthusiasm.

As is tradition, we followed Fred’s update on the work of the IMT with our annual national Fighting Fund collection. Our political discussions prepared the way for a record collection. Comrades sacrificed tremendously to build the forces of Marxism in the United States, raising over $25,000 to carry forward our work. This total, gathered from significant contributions both large and small, is a clear reflection of the determination and will to build the IMT in the United States, so we can play our role in bringing the working class to power around the world. Later that night we met at a separate location for an evening social. Many comrades remarked about the high level of camaraderie, mutual respect, and friendship displayed at the school.

On Sunday, the school reconvened for a discussion on the importance of the press in building our organization. As the WIL matures and develops around the United States, our focus on revolutionary press gains in importance. The press ties our organization together while at the same time serving as the public face of the WIL. The organization is launching a campaign to increase subscriptions to the paper and sympathizer memberships to the WIL this year, and we invite all of our supporters to consider taking these steps to support our work. With our goal of offices in New York City in sight, every penny of support is greatly appreciated!

The final sessions of the school consisted of a series of workshops and plenary meetings which covered topics including how to write for the paper, how to sell the paper, how to conduct contact discussions, student and youth work, how to chair meetings, and how to prepare a leadoff. Comrades participated in numerous discussions and debates on these topics, each sharing their experiences from different parts of the country and different areas and rhythms of work.

The school closed with a summary of the weekend’s discussions, given by Fred Weston, who urged the comrades to build the organization boldly and with enthusiasm. We sang the Internationale and Bandiera Rossa, and retired to a local restaurant for informal discussions and more camaraderie.

Many thanks are due to the comrades in Pittsburgh who put many hours into organizing the school and ensuring that the proceedings went smoothly. The food and drink were excellent, and the accommodations and transportation went off without a hitch.

The 2015 American Marxist School was a resounding success and highlights the gains made by the IMT in the United States since our founding in 2002. We are confident that our methods and ideas will culminate in the successful construction of a powerful Marxist organization in America, the key country of world capitalism and imperialism. A successful revolution in the United States will quickly spread to Canada, Mexico, and the rest of Latin America, and will relieve the pressure of imperialism on the working class of the entire world. If we show that it can be done in the United States, the workers of the rest of the world will quickly follow suit, leading to the socialist transformation of the entire planet. 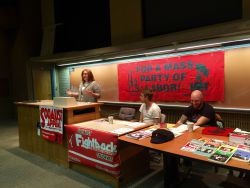 Massive revolutionary events impend in the United States and globally, and the key component to the victory of the socialist revolution is a mass Marxist leadership with deep roots in the working class movement. The comrades of the WIL are working hard to build such a leadership, and we invite you to join us!