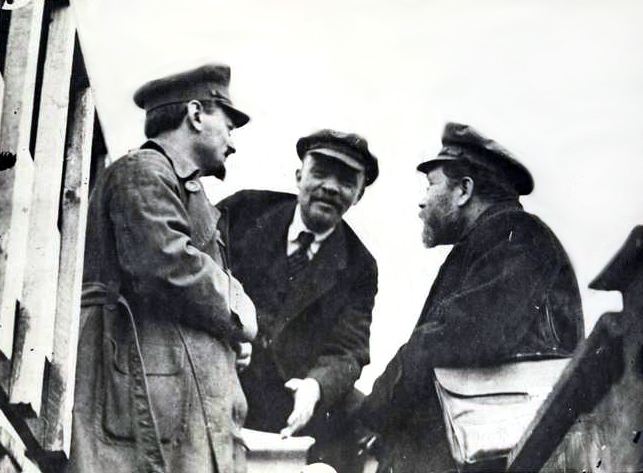 In the avalanche of propaganda against “Communism” an idea is often peddled that while preaching equality, the Communist leaders make sure their own personal position is well catered for. What this propaganda is based on is the horrible bureaucratically degenerate Soviet Union under Stalin. Not happy with attacking Stalin, however, they attempt to show that Lenin was no different.

In this caricature Lenin is transformed into an extremely rich bureaucrat, who hypocritically talks about wage “equality”, while earning ten times the wage of an industrial worker! This - for anyone with a simple grasp of Russian society under Lenin - is blatant nonsense.

One source of such blatant rewriting of the facts is Professor Richard Stites, a bourgeois historian who wrote a book called “Revolutionary Dreams – Utopian Vision and Experimental Life in the Russian Revolution”. The whole thrust of Stites argument is that the revolutionary “utopians” were as corrupt as the old order. “Side by side with the augmentation of power among revolutionary leaders came the accretion of wealth – goods, services, wages, and privileges – for themselves and for designated 'specialists'.” (Stites, p.140). The whole purpose of this book, like so many others, is to discredit the Russian Revolution and Lenin in particular.

But what was the real situation in Lenin's Russia? According to Marcel Liebman (Lenin Under Leninism):

“While the place occupied by the workers in the state structures reflected their new status, the reigning ideology confirmed their dominance in the country's social climate. Lenin called, as we have seen, for strengthened discipline, output, and productivity, and advocated the employment of certain capitalist methods of industrial management. But these appeals, inspired by desire to overcome the economic crisis, did not prevent the implantation and development of attitudes and values which, breaking with those of the bourgeoisie, reflected the traditional aspirations of the socialist movement. This was the case, for example, with the egalitarian tendencies that permeated the ideals and the social practice of Leninist Russia. In this matter the example was set from the top by Lenin in particular, who took the initiative in fixing the monthly wage for the highest in the land, the People's Commissars, at 500 roubles, comparable to the earnings of a skilled worker.” (Our emphasis).

Lenin received the wages of a skilled worker, not 10 times more. As Liebman continues:

“Party members were obliged to pay over to the Party any income received in excess of that figure. This was no mere demagogic gesture. When a decision was taken in May 1918 to increase the wages of People's Commissars from 500 to 800 roubles, Lenin wrote a letter, not intended for publication, to the office manager of the Council of People's Commissars, in which he protested against 'the obvious illegality of this increase', which was 'in direct infringement of the decree of the Council of People's Commissars of November 23rd [18th], 1917,' and inflicted 'a severe reprimand' on those responsible. The 'specialists' to whom the new regime felt compelled to make concessions were paid a wage 50 per cent higher than that received by the members of the government.” (Liebman, p.352).

According to the account by Victor Serge, who worked in Russia during 1919:

“Every day at the table reserved for the Northern Commune Executive, we found greasy soup and often a ration of slightly high but still delicious horse meat... In spite of my special rations as a Government official, I would have died of hunger without the sordid manipulations of the black market, where we traded the petty possessions we had brought in from France. The eldest son of my friend Yonov, Zinoviev's brother-in-law, an Executive member of the Soviet and founder and director of the State Library, died of hunger before our eyes. All this while we were looking after considerable stocks, and even  riches, but on the State's behalf and under rigorous control. Our salaries were limited to the 'Communist maximum', equal to the average wage of a skilled worker.” (Serge, Memories of a Revolutionary 1901 – 1941, p.79, our emphasis).

“In the Kremlin he [Lenin] still occupied a small apartment built for a palace servant. In the recent winter he, like everyone else, had had no heating. When he went to the barber's he took his turn, thinking it unseemly for anyone to give way to him.” (Serge, p.101)

Krupskaya used to go to the restaurant in the Kremlin to fetch the dinner. She was often seen walking along with a large chunk of black bread and a pot of soup. This is hardly a man living on ten times the income of an industrial worker!

In fact on 18th November [1st December] 1917, Lenin personally drafted and pushed through a government decree on salaries: “Recognising the need for energetic measures to reduce the salaries of high-ranking office employees and officials in all state, public and private institutions and enterprises, the Council of People's Commissars decrees:

“1) that the salary limit for people's commissars be fixed at 500 roubles a month where there are no children, and 100 roubles extra for each child; housing to be at the rate of not more than one room for each member of the family; 2) that all local Soviets of Workers', Soldiers' and Peasants' Deputies be asked to prepare and carry out revolutionary measures to impose special taxes on high-ranking employees; 3) that the Ministry for Finance be instructed to draft a general law concerning this reduction; 4) that the Ministry for Finance and all the respective commissars be instructed to immediately study the estimates of the ministers and cut all excessively high salaries and pensions.” (Lenin, Collected Works, vol. 42, pp. 37-38).

Given the delay in the world revolution and the backwardness of the country, the Soviet State was forced to rely upon bourgeois specialists to save the population from starvation.

“Naturally, in a developed socialist society it would appear quite unfair and incorrect for members of the bourgeois intelligentsia to receive considerably higher pay than that received by the best sections of the working class”, stated Lenin. “Under the conditions of practical reality, however... we must solve this pressing problem by means of this (unfair) remuneration for bourgeois specialists at much higher rates.” (March 1918, ibid, p.78)

In May 1919, when the Soviet Republic was on the verge of collapse, urgent measures were taken for the defence of the country. Above all, they had to bribe the engineers and technicians, who were stampeding to the West, with material incentives to stay. The draft decision on “Salaries for Specialists” was not issued by the Central Committee but by the Council of People's Commissars on 23rd May 1919. The decision was taken to ensure that a very tight reign surround specialist salaries of 3,000 roubles. This would constitute a specialist wage of 6 to 1, given that the average skilled wage at this time was 500 roubles. This differential was exceptional and could only be paid after it was endorsed by the government itself. That was the very meaning of the government decision drafted by Lenin to keep a tight grip over this “bourgeois” differential.

“On June 15 only those whose salaries have been endorsed by the Council of People's Commissars shall receive the rate of 3,000 roubles and more.” (Lenin, collected works vol. 42, pp.136-137)

The average workers’ wage in Moscow in 1924-5 was 44 roubles for industrial workers and 66 for all workers. Lenin's wages in 1921 were 500 roubles. By comparing wages from different dates one could indeed be led to think that Lenin's wage was more than ten times that of an industrial worker. But such trickery is not worthy of any serious historian.

Not to recognise this would be to give an entirely wrong view of wage differentials under the regime of Lenin and Trotsky, which were 4 to 1. As can be seen from Lenin's quote, the exceptional differential of 6 to 1 for specialists had to get the approval of the government itself before it could be introduced! The apparent 60 to 1 differential – higher than the capitalist west ? is a complete myth based solely on the above trickery referred to.

Under Stalin, differentials were to change dramatically, but even then, the process was slow to begin with. The maximum differential of 4 to 1 was not formally abolished until 1931 and a general was court-martialled as late as 1931 for having had his boots cleaned by a private. Later, as the economy developed, the bureaucracy, which accrued vast privileges, consumed ever increasing amounts of surplus value through wages, perks and theft. The income differential between the managers and workers, officers and soldiers, state bureaucrats and the people of the USSR was higher than that of the capitalist countries.

“It is absolutely impossible to describe the Soviet bureaucracy in accurate figures, and that for reasons of two kinds. In the first place, in a country where the state is almost the sole employer it is hard to say where the administrative apparatus ends. In the second place, upon this question the Soviet statisticians, economists and publicists preserve, as we have said, an especially concentrated silence.” (Revolution Betrayed, p.136)

“There is no possibility of estimating what share of the national income is appropriated by the bureaucracy. This is not only because it carefully conceals even its legalised incomes. It is not only because standing on the very boundary of malfeasance, and often stepping over the boundary, it makes a wide use of unforeseen incomes.” (ibid., p.142)

Under Stalin and his successors the bureaucracy rose further and further above the working class, reaching levels whereby the top bureaucrats especially were living in luxury. This strengthened their tendency to look to bourgeois relations at all levels of society, to the degree that when the Soviet Union eventually collapsed many of the same bureaucrats ruled over the transition to capitalism, completing the degeneration that had begun under Stalin. But none of this was attributable to Lenin who stood firm on the principles he had fought all his life for.