Over the last three weeks Costa Rica has become another of the many hot spots in the international class struggle. This little country known in the past as the "Central American Switzerland" is awaking from a long period of lethargy.

Over the last three weeks Costa Rica has become another of the many hot spots in the international class struggle. This little country known in the past as the "Central American Switzerland" is awaking from a long period of lethargy. The recent strikes are another step in the process that started with the struggles against the privatisation of the ICE in April and May 2000.

The strike stated on May 16 and has been going on for 21 days now and during which the Costa Rican workers have held important demonstrations on several occasions. The 15,000 workers of the ICE (Costa Rican Electricity Institute) have called mass demonstrations (with 50,000 taking part on June 4 in the capital, San José) and together with the teachers they have forced three ministers to resign. The Government crisis is a proof of the strength of this movement. 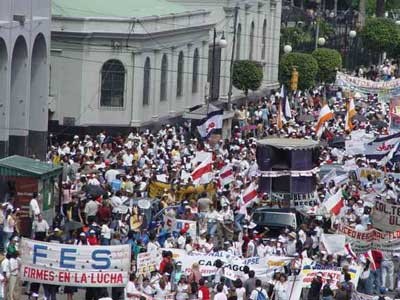 The unpaid salaries, some for more than four months, have forced the workers to say enough is enough, and has placed the electricians and the whole of the labour movement on a war footing with demonstrations that represent a qualitative change in the situation.

The fact that they have managed to reach the beginnings of agreement today, and one that had the support of all social groups in society, is based on the promise that the workers' demands will be fulfilled. In any case, this struggle has meant an awakening of the movement which has achieved an early victory. The unions should not rest on their laurels. They must use this first victory as a base from which to launch the next phase of the struggle. The threat of a general strike, which was raised a few days ago, must not be forgotten. It has to be worked towards as an aim of the movement if its goals are to be achieved without any terms and conditions attached. In order to achieve a clear-cut victory the movement must show its real strength and use its political and industrial muscle.

The agreement does say that there will not be any "victimisation of an economic, legal, disciplinary or of any other type". In other words, despite the fact that the strike has lasted for 21 days the workers will be paid. However, La Nación, an influential newspaper from San Jose stated: "Although the document contains no guarantee that the Central Bank – which is an autonomous body- will authorise the issuing of shares, the participants were optimistic that this will happen".

In other words, what this means is that the agreement is a worthless piece of paper if the Central Bank decides it "cannot" afford it. The interests of the workers should not be left in the hands of the Central Bank. The Costa Rican masses will have to take to the streets again to defend this agreement. The union leaders must learn from their own mistakes and work to assure a victory in the democratic traditions of workers' struggle, involving the rank and file of the unions.

Another step in Latin America

If this kind of movement is taking place in Costa Rica, it can happen in any other country. What was considered a haven of peace, democracy and stability has shown that that was only a mask that could not be worn for much longer. There is not a single stable regime in the whole of Latin America. The Marxists have explained this idea for a long time. Now it has been vindicated by the masses of Venezuela, Argentina, Ecuador… and now even of little Costa Rica. 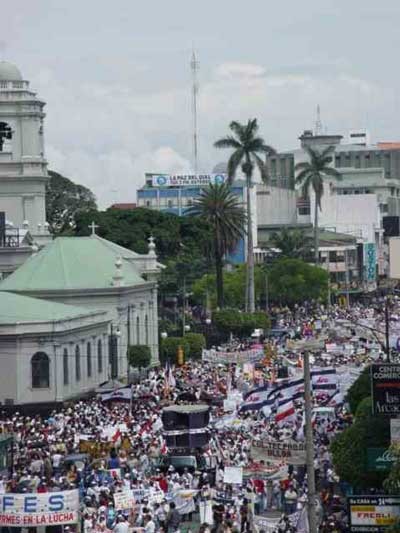 The events of the last few weeks show that the tide is moving in favour of millions of workers and youth all across Latin America. A few days ago we reported on the State of Emergency that had been declared in Peru. The response of the masses was immediate against the repression. The masses were chanting in the streets: "The Argentinazo is coming!"

Another sector gets involved in the struggle

The teachers of Costa Rica have also shown their readiness to struggle to improve their working conditions. The negotiations between the government and the teachers' unions to halt the strike in the primary and secondary schools were still going on last night and no agreement that was acceptable to the strikers seemed anywhere in sight. Now the resignation of the Education minister, Astrid Fischel, is the third political victim of the conflict that is taking place in Costa Rica.

Unpaid wages and the future of the pension system are the main reasons for this struggle of the teachers. This dispute has the same character as the struggles taking place in other countries, like in France or Austria, and for the same reasons,. The so-called economic globalization has also globalised the workers' struggles. The offensive of the different ruling classes against the working class is having an international response.

The teacher's strike that started on May 23 was called by ASPE and SEC (two of the main teachers unions). On June 2 another union joined in (ANDE). As well as demanding payment of the unpaid wages and disagreeing with the Government on the way pensions are to be calculated, the teachers are also demanding guarantees that funds for school meals and transport for students be made available.

Last night the representatives of the strikers were also demanding that there be no victimization of all those involved in the dispute. This is an indication of the mood that exists and also that there is a real chance for a victory of the unions. This will open a new period in the class struggle of Costa Rica.

See the original in Spanish.