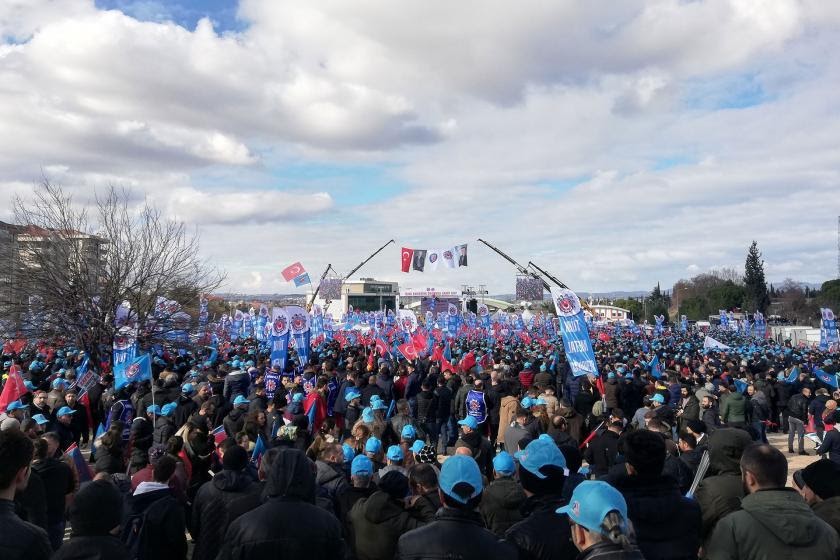 140,000 Turkish metal workers, including those in the important automotive and white goods manufacturers, are set to strike in early February after negotiations with the bosses’ organisation broke down.

All of Turkey’s major metalworkers unions, including Turkish Metal Unions, Turk-Metal, Birleşik Metal-İş, decided to strike after an agreement could not be reached in the collective agreement negotiations between the unions and The Turkish Employers’ Association of Metal Industries (MESS).

The MESS responded by making a decision to initiate a lockout. But this is sure to anger the workers even more in some factories. The workers immediately responded by with ongoing partial strikes.

Had the workers accepted the deals proposed by the bosses, they would have been left in a miserable state. That leaves them with no other options than to fight. The original offer of the bosses was a mere 6.4 percent of wage increase over three years. The bosses went on to raise their offer to 8 and then 10 percent. But this would still indicate a decrease in real wages.

In a blatant lie, the MESS stated: "While MESS revised and increased the wage increase offer for the purpose of reconciliation for the second time, Turkish Metals and United Metal-İş strikes decided to change their demands. The wage increase offers of the trade unions are five times the period inflation.’’ Bosses love to carry on lying.

The official inflation rates over the past two years have been at 16.33 and 15.68 percent respectively. The previous agreement was already below the inflation rate, and the new one would cut even further into the living standards of the workers of one of the most profitable industries in Turkey, which brings in more than $30 billion per year. The unions have demanded wage increases between 27 and 34 percent, along with more humane working conditions in a two-year contract. This would merely maintain the present living conditions.

While the bosses are raking in huge profits, the cost of the economic crisis is being passed onto the workers. The poverty limit today stands at around 6,500 Turkish liras, yet the minimum wage is around only 2,300 Turkish liras, leaving millions of workers in a desperate situation. On top of this, all official inflation figures have been manipulated by Erdogan’s government. The real inflation, which is hitting the poorest hardest, is an immeasurable burden on working-class families.

If an agreement cannot be reached in the collective negotiations, the unions have announced that they will go on strike. Workers will use their power over the production process and try to win their rights. It seems that the agreement will not be reached and a general strike will start as a result. According to Adnan Serdaroğlu, leader of the Birleşik-Metal union, the MESS is placing its trust in the Erdogan government to impose a ban on the strike.

This is what happened in 2018, when failed negotiations led to an overwhelming vote to strike amongst the metal workers. But the strike was banned by government decree shortly before it was to take place.

The metal workers’ movement has been heating up for a number of years. In 2015, a series of radical wildcat strikes in the sector led to widespread concessions by the bosses. Back then, the workers were not only striking against the bosses but also against the leaders of Türk Metal, which is an affiliate to Türk-is: a semi-statal union. While the leadership of Türk-is are on the right-wing of the labour movement, the union’s semi-official status means that it is the biggest union with more than a million members. The fact that Türk-is is now officially supporting these strikes is an indication of the pressure building up underneath the surface of society. The Türk-is are putting themselves at the head of the movement in order to slow it down and prevent it from becoming a threat to the regime.

Following the failed negotiations, hundreds of thousands of workers have joined rallies around the country. Speaking at a mass rally in Genze, Adnan Serdaroglu, the leader of the Birleşik-Metal said: “we create the wealth and want our share.” The workers accompanied the rally with their enthusiastic slogans: “We will not be the slaves of the bosses” and “this is just the beginning, continue the struggle!”

Turkey’s key position as a low-wage country on the borders of Europe was the basis of the economic boom, which lasted more-or-less uninterrupted from 2002 to 2012. This boom was in turn the economic basis for the relative social stability of the Erdogan regime. But as the world economic crisis began to filter through to the Turkish economy, all of this has started to unwind. The ruling class has attempted many diversions, such as the wars on the Kurds in Turkey, in Syria and sending troops to Libya. But these measures cannot stem the rising tide of anger. A small sign of this anger was shown in the defeat of the AKP the largest cities of Turkey in last year’s local elections. Now we see how the working class is also beginning to move.

All of this anticipates the bitter class struggles of the future. The Turkish working class is the largest and most powerful working class of the Middle East. When it moves, it will send shockwaves far beyond the borders of Turkey, signalling a new stage in the class struggle throughout the whole region.