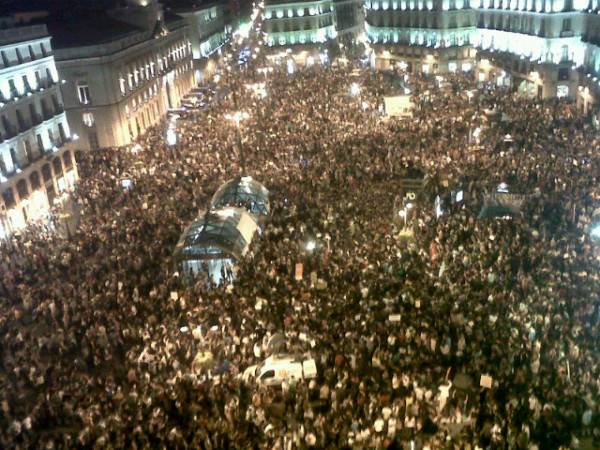 Hundreds of thousands of people, certainly well over a million, took to the streets of Spain on October 15 to express, once again, their indignation at the crisis of capitalism and the austerity plans which are being introduced to make working people pay for it.

The size of the movement surprised everyone, including the organisers, and represented another step forward in relation to the marches on May 15 which gave birth to the movement, and also in relation to the June 19 demonstrations. Furthermore the movement of the Spanish indignados (enraged), as it has become known, had made an appeal for demonstrations to take place all over the world on the same day. The movement in Spain was inspired by the revolutionary movements of the Arab spring and in turn it has become a point of reference and inspiration to similar movements in other countries, including in Greece and the United States.

Thousands of activists responded to the October 15 call in nearly 1000 cities around the world, but outside Spain a real mass movement only took place in Italy. While it is true that revolutionary events and mass movements taking place in one country capture the imagination of the people in others, the rhythm of the movement is determined by local conditions. What is important is the internationalist character, the awareness of being part of the same movement against the capitalist crisis which is developing amongst the most advanced layers.

The demonstration in Madrid had been preceded by a massive strike movement of teachers and joint demonstrations of teachers, parents and students in defence of state education. The 15O march had 5 different starting points in different parts of the capital as a way of gathering people from different neighbourhoods and also those coming from working class areas outside of Madrid. The mood of euphoria was building up as the crowd became larger and larger, and when the emblematic Puerta del Sol square was already full to capacity, there were still hundreds of thousands packing the route of the march leading to it. This VIDEO gives a partial view of the massive demonstration:

as does this PICTURE:

In Barcelona, the demonstration was one of the largest that the city has witnessed in recent times. Hundreds of thousands streamed through the main arteries and when the head of the demonstration reached the Arc de Triomf, thousands were still at the starting point in Plaça Catalunya. Catalonia has seen in the last few months massive demonstrations against austerity cuts implemented by the right-wing Catalan government as well as strike action by teachers and health workers. Having reached the end, the demonstration then divided into three columns representing the struggle against cuts in health care, education and against repossessions and in defence of housing. The first column moved towards the Hospital del Mar, where health workers have been fighting against its closure. The second column marched towards the Faculty of History of Barcelona University which has been occupied by students in defence of free education. Finally, a third column moved to the working class area of Nou Barris where they occupied an empty block of flats which is about to be auctioned off, as a way of protesting against the hundreds of thousands of home repossessions which have taken place since the beginning of the recession.

The massive character of the demonstrations shows how the 15M movement (named after the demonstrations on May 15 which kick started it) has been able to offer a channel to the growing anger which exists amongst wide layers of the population against the capitalist system, a mood which the bureaucracy of the trade unions has been unable or unwilling to tap into. People feel very strongly that they are at the mercy of forces which they do not have any control over (“the markets”, “the rating agencies”, etc) and which decide over matters that affect themdirectly, their jobs, their homes, their livelihoods, etc. Furthermore, ordinary working people are being asked to pay for the crisis of capitalism, when bankers and capitalists are being bailed out to the tune of millions of euros. The capitalist crisis is affecting Spain severely, but people are looking towards Greece and can see the savage cuts which are being implemented there. They know that is what is coming to Spain.

The mood, however, is not just one of indignation, but one where people want to do something, take action to express their anger and in one way or another change the situation. The Arab revolutions played an enormous role in changing the consciousness of millions: i.e. that mass action can achieve fundamental change. This is a very powerful idea, particularly when the electoral front seems to offer no way out. General elections have been called on November 20, and the right-wing Popular Party is likely to win by a large margin. Millions who trusted Zapatero’s Socialist Party, on the basis of him being perceived as a left alternative to the previous Popular Party government of Aznar, were bitterly disappointed when the social-democratic government became the main instrument for the implementation of capitalist austerity measures, in agreement with the PP. While the left-wing United Left has grown in the opinion polls, many still consider it too small to make a difference. What is being questioned, in a more or less clear way, is not just the economic system but also bourgeois democracy, as shown by the slogans taken up by the masses: “for real democracy now”, “they call it democracy but it is not”.

The election of a PP government in these conditions will only serve to prepare an even bigger mass movement, one which will not be limited to massive demonstrations, but which will move on to the industrial arena, with strikes and bitter conflicts. In this process, the most advanced elements will draw the conclusion that it is not enough to oppose the capitalist system, a revolutionary alternative is needed.