South Africa
Share
Tweet
Today South Africans are going to the polls. The elections come after the December 2008 Pholokwane Conference of the ANC, where the Mbeki-led right-wing clique was resoundingly defeated, breaking away to form the Congress of the People, while the new Zuma leadership took over. For years workers in South Africa have waited for the "second stage" of the South African revolution that never materialised. It is about time the socialist agenda were taken up again by the ANC!

Today South Africans are going to the polls. Broadly speaking it is a rerun of all the other elections since 1994 with the voting public divided between the black majority who will vote historically for the ANC and the white minority who will be voting hysterically against the ANC. The black majority vote for the ANC because they perceive it as the organization that has liberated the country from the racist minority rule which spanned almost 400 years of colonialism and 40 odd years of Apartheid. 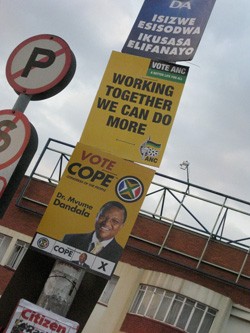 Election Posters in the April 2009 South African Elections. Photo by Jeppestown on flickr.

Apartheid capitalism had its roots in a 19th century mining revolution which saw the indigenous black population dispossessed of the main means of production - the land and their means of reproduction, including cattle. Cecil John Rhodes set a precedent by combining his role as the leading mining capitalist and as prime minister of the Cape Colony to overcome the major difficulties of making the mining sector profitable - the location of the diamonds and gold far from coastal ports and the low grade of ore by turning the pre-capitalist African social formations in the country and the Southern African hinterland into sources of cheap migrant labour serving the sector - a system whereby African men became semi-proletarianized, leaving their families to eke out a peasant existence in remote marginal rural areas or "reserves". The period of the Union of South Africa saw this system formalized with acts such as the 1913 Land Act which restricted the African majority to 13% of the total land area of South Africa. It was in response to the unfolding racial capitalist system that evolved at this time that the Native African National Congress was formed in 1912.

Apartheid attempted to further formalize and streamline this system of cheap labour by turning these remote rural areas into tribal "independent states" or Bantustans thus depriving the black African majority of even the limited citizenship rights that remained in "white" South Africa.

The black working class was effectively balkanized, left without any freedom of movement, no franchise except in tribal Bantustans, no freedom of association and no freedom of expression. Thus Xhosa speakers were only allowed to live and work in the Eastern Cape, Tswanas in the Western Transvaal, Zulus in KwaZulu Natal, etc. Successive colonial and Apartheid administrations attempted to prevent the evolution of a working class consciousness on the mines and farms of South Africa, through attempting to impose and sustain a tribal consciousness through the "self-rule" Bantustan system. The class struggle on the mines and the emerging manufacturing sector gave rise to the formation of the Communist Party of South Africa (CPSA) and trade unionism among black workers. White workers were bought off through the introduction of the Colour Bar which reserved certain "skilled" jobs for white workers - this effectively split the working class along racial lines.

The manufacturing sector in South Africa owes its existence to two growth spurts caused by World War 1 and World War 2. The disruption of production as a result of war in England and Europe resulted in the relocation of manufacturing to colonies with large white populations, Canada, Australia, New Zealand and South Africa.

The ANC, the CPSA and the black trade union movement, organized into the South African Congress of Trade Unions (SACTU), entered into a tri-partite alliance in the struggle against Apartheid. The first organization to be banned after the white right-wing National Party came to power in 1948 was the CPSA which fell victim to the first piece of Apartheid legislation - the Suppression of Communism Act. The CPSA reformed itself as the South African Communist Party (SACP) in exile. 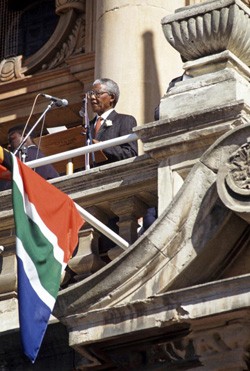 After the elections in 1994: Newly-elected President Nelson Mandela addressing the crowd from a balcony of the Townhall. UN Photo/Chris Sattlberger.

Fast forward to the current election. The ANC has routinely won elections in South Africa since 1994, absolutely dominating the political landscape. The ANC regularly emphasizes the contention that it "is a broad church", i.e. a united front of interests driving a nationalist project. In exile the left wing of this "broad church" was motivated by the promise of a two stage process of revolution, the first stage being the "national-democratic" revolution with a nationalist programme to deal with the national question: non-racialism, non-tribalism and gender equality; the second stage to deal with the social question of establishing a socialist economy through the nationalization of the commanding heights of the economy. The first stage of the revolution would drive through the aspirations of the nationalist petite bourgeoisie; the second stage that of the working class.

However, as Marx noted, we make history but we do not make it as we please. The liberation movement effected a democratic negotiated compromise between 1990 and 1994 when the first democratic elections took place that allowed for new class compromises that allowed mining capital in particular and capital in general to negotiate a new lease of life for itself by tying itself to aspirant bourgeois elements in the African National Congress and its alliance. The aspirant bourgeois elements in the tripartite alliance gained supremacy after 1994 with the adoption of the neo-liberal Growth with Equity and Redistribution (GEAR) strategy, and consolidated its power under the leadership of Thabo Mbeki's presidency of the ANC. For the left in the ANC alliance it became increasingly clear that the vision of a socialist society was receding further and further into the distant horizon as Mbeki pushed for the creation of a black bourgeoisie in general with a particular focus on mining. Mbeki's hand was strengthened by an unsurpassed boom in the global commodities market which saw the price of platinum soar to US$2000 an ounce. Key ANC political leaders inside and outside of government joined an obscene rush to be billionaires, and major mining corporations had the pick of the crop of ANC leaders to choose from as Black Economic Empowerment (BEE) Partners. 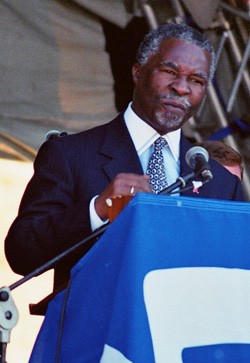 27% share holding in mining corporations were negotiated where the prominent ANC cadres were sold shares against dividends, with everyone believing in the spirit of Francis Fukuyama - that we have reached the end of history and the pearly gates of capitalist utopia. While prominent leaders were feeding at the golden trough of mining capital, conditions for the working class deteriorated rapidly. Mining workers on starvation wages of R1800 per month were given "living out" allowances of between R600 and R800 per month in an effort to disguise the old migrant labour system. The vast majority of these workers ended up in squatter camps of tin shacks without electricity, water or waterborne sewage or decent diets - prey to sex workers and shebeens. At Impala Platinum's Rustenburg operations workers are living in appalling conditions at "Freedom Park" squatter camp in close proximity of some of the richest platinum mines in the world. On a recent visit health workers told me that more than 60% of the population of Freedom Park is HIV positive. All the mining corporations are retrenching tens of thousands of workers monthly in the Rustenburg area, as the National Union of Mineworkers has informed me. These workers are not only losing their jobs and income, but also their access to Anti Retroviral Treatment (ART).

The current election, being held today (Wednesday, 22 April) is defined by the anger of ordinary members of the African National Congress and its alliance partners over the failure of the Mbeki presidency to deliver on key challenges that confront the working class and poor - job-creation, poverty alleviation, lack of access to health, failure to control debilitating diseases such as HIV/AIDs and TB, and lack of access to education. The real election took place in December 2008 at the Pholokwane Conference of the ANC, where the Mbeki clique was resoundingly defeated. This same petit bourgeois clique refused to accept defeat and removal from the levers of state power, which they so deftly used to enrich themselves, that they broke away and formed a new political party, the Congress of the People. It would seem as if many who "did not join the struggle to be poor" (the Mbeki clique) deserted from the ANC and joined the ranks of COPE.

It is possible that the ANC alliance will win a two-thirds majority in the elections. The defeat of the Mbeki clique at Pholokwane has gone a long way to restore faith in the African National Congress amongst working class and poor members who realized that they could effect a change of leadership in the organization. The removal of Mbeki from the leadership of the ANC was a distorted reflection of the rebellion of the rank and file of the ANC, COSATU and the SACP against the right-wing, capitalist policies of the ANC government and of the deep seated desire of a shift to the left. This is in stark contrast to other political parties contesting the elections where party presidents seem to have ensconced themselves as presidents for life. Bantu Holomisa's United Democratic Movement (UDM), Gatsha Buthelezi's Inkhata Freedom Party, Patricia DeLille's Independent Democrats (ID), Keneth Meshwe's Christian Democratic Party and Lucas Mangope's United Christian Democratic Party (UCDP) also suffer from severe personality cults, i.e. they are parties where members are not allowed to challenge the "great leader." Clearly, no South Africans are interested in elevating such individuals to state power where they will become "life-long presidents" if half a chance presented itself. 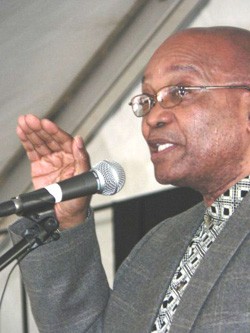 The political landscape is likely to change, as it is possible that the Congress of the People (COPE) will become the official opposition, replacing the Democratic Alliance (DA) in this role. Like most opposition parties the DA has limited national support, and none whatsoever among the working class and the poor. It is perceived as a liberal party that has opposed on principle any gains made by the working class since 1994, whether those gains were in the rights to organize, the integration of education, access to health, etc. The DA has fought campaigns that sought to mobilise the "hysterical vote" of the white minority who believe that black people, by virtue of their race are inherently corrupt and incapable of managing a country. By bleating about black rule through slogans like "Vote to STOP ZUMA" (the presidential candidate of the ANC) the DA has reminded voters of the red-scare (rooigevaar) or black-scare (swart-gevaar) tactics of the National Party that ruled the country under Apartheid. In doing so the DA is limiting its own chances at success in the elections while consolidating the voters who historically supported the ANC in the liberation struggle behind the leadership of that organization.

A victory for the ANC in these conditions will express the wish of the working class and the poor for fundamentally different policies which can solve their most pressing problems. However this will only be possible with the adoption of a clear socialist programme. The working class and the poor, who were largely responsible for the defeat of the Mbeki clique at the Pholokwane conference, need to be vigilant to ensure that they deepen the gains of Pholokwane and ensure a policy shift to the left after today's elections.