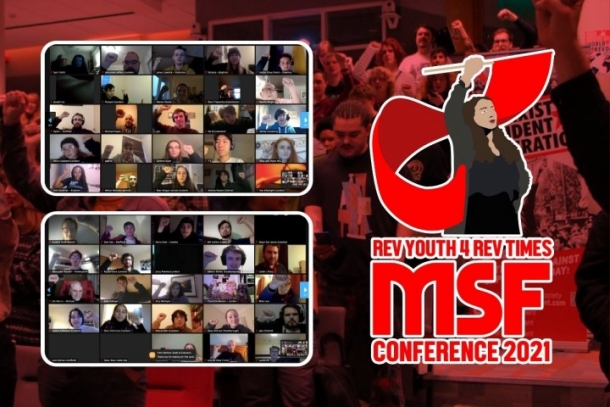 The MSF recently held its largest ever national conference, with hundreds of young people from schools and universities across the country taking part. There has never been a better time to get involved and join the revolution!

Capitalism is in a deep crisis. The COVID pandemic has revealed the callousness and cruelty of the ruling class. The appetite for revolutionary ideas on campus is growing rapidly. The rent strike emerging is the biggest student movement in a decade, bringing with it a new layer of radicalised youth.

The Marxist Student Federation has gone from strength to strength. The MSF now boasts 40 student societies. Many of these are the leading left presence on campus.

Reflecting the overall growth of the MSF, this year’s conference almost doubled in attendance compared to the previous year.

Despite being held online, along with all the setbacks lockdown has caused, students from all over the country – and from across the world – met with excitement and enthusiasm to discuss revolutionary ideas.

Fred Weston, editor of marxist.com, kicked off the day with a world tour of the turbulent events and revolutionary uprisings that have been taking place in the past year.

Capitalism is facing its worst economic crisis in history. And the ruling class are carrying out the cruelest of measures to protect their economic interests – at the expense of the lives and livelihoods of the working class.

The racist murder of George Floyd in the US sparked the electrifying Black Lives Matter movement. This quickly swept across the world, with millions coming out to protest against the horrors of systemic racism, imperialism, and police brutality.

Young people up and down Britain organised and joined the BLM protests en masse, with slogans that emphasised that ‘the UK is not innocent’. The British ruling class is just as complicit in racist oppression as any other.

This culminated in events such as the toppling of the Edward Colston statue in Bristol – a monument representing the horrors of British imperialism. This inspiring episode shows the power of mass action in fighting against racism and capitalism.

The real role of the police under capitalism has been brought into question in one country after another. The huge #EndSARS demonstrations in Nigeria, for example, have highlighted that the police exist to protect the interests of the ruling class, not to protect the people.

Reforms are not enough to defeat racism and police brutality. We need a socialist revolution!

Our second session saw a panel discussion on ‘Marxism on campus’. Activists involved in recent movements in education gave reports from the frontline, explaining the role of Marxists within these. This was followed by regional breakout rooms to involve all attendees in the discussion of local situations.

University students are being charged extortionate amounts for university accommodation that they legally are not allowed to return to. Furthermore, students were lured into halls of residence in the first place by the promise of in-person teaching and support – a promise that management knew they could not keep.

Students living in campus accommodation have been trapped inside by fences and locked doors, installed under the orders of university management. There have been reports of unlawful entries to flats by police, big outbreaks of COVID-19, and little-to-no support for those who are isolating or sick with symptoms.

The Marxist Student Federation has published a set of clear and bold demands – demands that go above and beyond just the matter of paying rent. As Marxists, we must fight against the marketisation of higher education. To lead this fight, we need to build the forces of Marxism on campus – spreading our ideas, and raising the sights of the student movement.

The panel continued with a report from a school teacher – a Socialist Appeal supporter and member of the National Education Union (NEU) – on the effect of Tory policy on schools during the coronavirus crisis.

Students and teachers, as well as lecturers in higher education, have the same collective interests at heart. Yet the government and management will attempt to play us off against each other. It is vital that the student movement unites and fights with teachers to demand better conditions in education for all.

Thanks to its defiant stance, the NEU saw 16,000 new members join the union in the first three days of January alone. On the back of collective, militant action, teachers were able to force a U-turn from the Tories.

Through their reckless actions, the government is putting the health and safety of students, teachers, their families, and their communities at risk. Now more than ever, therefore, we need strong trade unions, with support from students, to make the Tories retreat, and to fight for a safe education system.

But it is not just Britain that is facing a crisis in education. Conference attendees were honoured to welcome comrade Zain of the Progressive Youth Alliance – the student organisation of the International Marxist Tendency in Pakistan – to give a report on the dire situation of students in Pakistan. 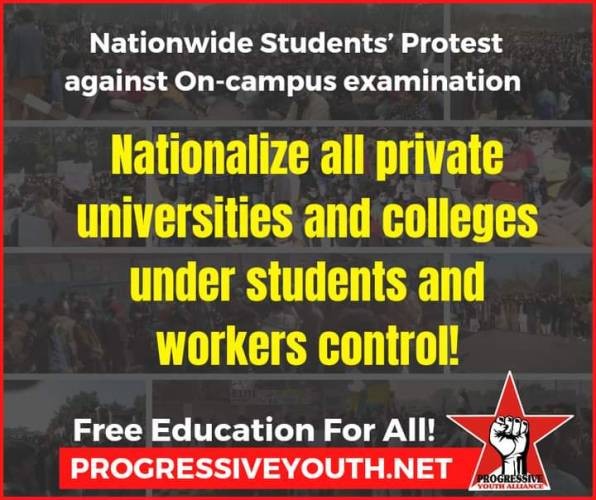 Zain’s report painted a picture that is eerily similar to the UK: the current education infrastructure is completely unsustainable; university staff face huge pay cuts and redundancies, under the excuse of coronavirus; and the government has ignored the cries of those left without an income, leaving them with no support during the pandemic.

The Progressive Youth Alliance organises regular ‘student day of action’ protests. Comrades have distributed over 100,000 leaflets, raising demands not just aimed at students, but for the wider labour movement too.

These demands include: investing 10% of GDP in education; providing a furlough-style scheme to support workers affected by the pandemic; and establishing a national student union.

It is clear that the struggle against the marketisation of education, and ultimately against capitalism, is an international one.

Throughout the day, we also had contributions from Labour members talking about the campaign for a recall conference. As comrades outlined, grassroots activists from across the labour movement are calling for this, as a way for Labour members to take back control and fight against Keir Starmer’s purge of the left.

Similarly, we heard from Unison members about their recent general secretary election, and about the upcoming NEC elections.

Paul Holmes unfortunately lost out to the right-wing candidate, Christina McAnea, due to the left vote being split across three candidates. But Holmes’ strong vote shows that there is still the opportunity to elect good socialist candidates to the NEC of the biggest union in the country.

In the evening, comrades were also treated to a special screening of a new documentary, Santiago Rising, about the 2019 Chilean protests. We were very lucky to be joined for this by the documentary’s director, Nick MacWilliam, who participated in a Q&A about the film and the movement it depicts.

Furthermore, the conference passed two important motions of solidarity: one with the Indian farmers’ struggle; and another defending left-wing director Ken Loach against recent slanderous accusations of antisemitism.

This article includes a solidarity with @KenLoachSixteen resolution passed at @MarxistStudent's conference last weekend. Ken has been the victim of a shameful smear campaign, under the pretext of the controversial IHRA definition of anti-Semitism. We wholly condemn this action. pic.twitter.com/bokkgOzeeM

The last session of this year’s MSF conference was titled Order from chaos: the role of leadership.

In the frenzy of student politics, the movement can often be disorganised and lack a clear direction. Instead, student movements tend to arise spontaneously, before losing momentum and fizzling out.

Strong leadership is the only way of harnessing this energy, in order to forge genuine mass movements that are capable of fighting capitalism.

The conclusion was clear: There has never been a better time to join the Marxist Student Federation and Socialist Appeal! Get in touch today and become part of the biggest revolutionary movement on campus!