Details
our correspondent in Lahore
24 March 2006

International Marxist Tendency
Share
Tweet
Over 1400 comrades participated in the 25th congress of The Struggle in Pakistan. Discussions were held on world perspectives, perspectives for Pakistan, and the situation in Kashmir. 350 comrades from Kashmir travelled for hours to participate in the congress along with comrades from Pakistan, India, and Afghanistan. See also the picture gallery. 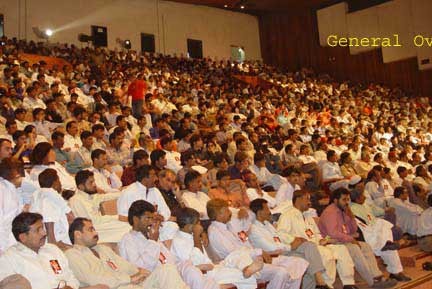 The 25th congress of the Pakistan Marxist Tendency, The Struggle, opened in Lahore this morning, Thursday 23 of March. The meeting place is the biggest meeting hall in the city, with a capacity of over 1,000, and was packed with workers, peasants and students from all over the country. 700 comrades travelled on one train, on which they hoisted red flags. Half of the comrades on this train came from Kashmir, who travelled a total of 11 hours by bus and train, and the others from Peshawar (North West Frontier) and Rawalpindi-Wah.

The total number in attendance exceeded the most optimistic predictions: 1, 486 comrades. As the hall only has a capacity of just over 1,000, many delegates had to stand or sit in the aisles. International delegates and visitors were present from Britain, Sweden, Belgium, Palestine, Afghanistan and India. The Indian delegates included MPs from the Lokh Saba (national parliament) and the Kashmir state assembly. 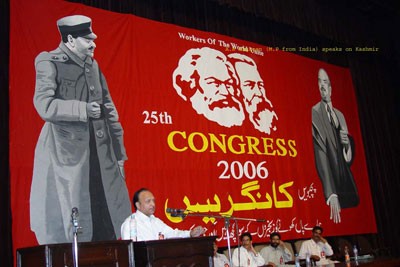 The meeting, as always, has been planned with military efficiency. All delegates received a printed credential upon registration and security and discipline has been maintained at all times. The hall is decorated with huge portraits of Marx. Engels, Lenin and Trotsky, and hung with revolutionary banners and slogans such as “We have nothing to lose but our chains and a world to gain”.

Four printed documents have been produced and were circulated a month before the congress: 1) World Perspectives with special emphasis on Latin America, 2) Pakistan Perspectives 2006, 3) Kashmir 4) Building the Revolutionary Party.

Comrade Hina (a young woman in charge of youth work) greeted everyone and comrade Manzoor (Member of the National Assembly) introduced the international guests. He said that in this congress we see the result of a whole year of intense revolutionary work. In Kashmir all our comrades lost dear ones and six comrades lost their lives. Despite this heavy blow, we could see courage and revolutionary conviction of the youth that turned tragedy into anger and struggle.

There followed two minutes silence for the departed comrades. 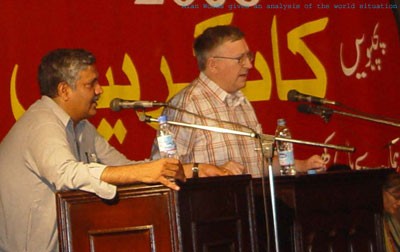 The first speaker was Alan Woods who delivered a detailed speech on world perspectives. “We live in a time of sudden turns and shocks at all levels”, he said. “Millions suffered from the earthquake. Some have said this is an accident of nature, or an act of God. But the question must be asked: why did so many die? Why were most of the dead in the poor areas? Is that the fault of God or Allah? Did God build those badly-built houses? I do not think so. It was rather greedy capitalists. Religion or morality has nothing to do with this catastrophe. It has to do with the capitalist system and the greed for profit.”

On US imperialism, he said: “500 billion dollars are spent on arms in the USA every year so they can dominate the world. The so-called Bush doctrine gives the USA the right to intervene in any country on the basis that they think there is a threat. On that basis, India could attack Pakistan at any time or vice-versa.”

“Is Pakistan really an independent country? The Americans dominate it completely. Bush lectures Musharraf like a headmaster lecturing a little boy. The PPP and Benazir have worked out a plan for restoring democracy in Pakistan. And where did they send it? They sent it to the US embassy!”

Finally, Alan made an impassioned appeal for a socialist federation of the Subcontinent as the only alternative to war and the barbarous communal strife that sets nation against nation and religion against religion. The speech was received with a standing ovation.

The Session on Kashmir 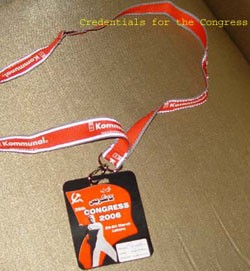 The session on Kashmir was led off by comrade Lal Khan: “Kashmir used to be a paradise. But it has suffered under Pakistani and Indian rulers. The earthquake was a terrible tragedy, which exacerbated the misery of the masses. It was a terribly difficult situation. But the revolutionary tendency rose to the occasion. These comrades, the youth, showed an example. They turned grief into revolt”.

Comrade Shujaad Kazmi (ex-President of the JKNSF) then spoke. In an impassioned speech, he pointed out that 70 percent of the Kashmiris live under the poverty line. He said that the ruling classes of India and Pakistan and their Kashmiri stooges are making a mockery of the real tragedy and suffering inflicted on the oppressed masses of Kashmir. “The oppressed in Kashmir lack a voice. We are trying to give them one.”

Comrade Adil Khan (Coordinating secretary of the Jammu and Kashmir Revolutionary Youth Alliance) explained that “immediately after the earthquake we tried to find the missing comrades in the disaster area. On the 12th October, three days after the earthquake began, we called a meeting attended by more than 150 comrades of the Struggle and the PTUDC and other fraternal organisations. After this meeting we set out on a wide ranging rescue and relief operation, which is still continuing.”

“However, we understood the need for a united front for these activities. Within 45 days we organised the JK Revolutionary Youth Alliance. This is an alliance of all the important left-wing and progressive youth organisations in Kashmir. We demanded that instead of the army, the people themselves should be organised to do the rescue work. We based ourselves on class politics. Only the oppressed masses had a real interest in helping their people. Our slogan was: ‘An injury to one is an in jury to all’. We set up committees at village and town level based on the soviet model to conduct the rescue and relief operation and distribute the goods that we received through the revolutionary solidarity caravans from India and Pakistan”. 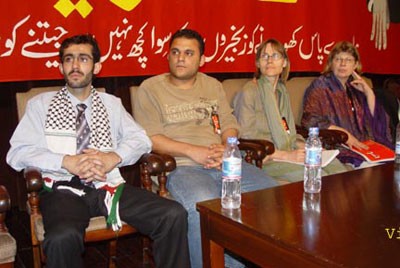 The next speaker was A.R. Shaheen, an Indian MP from Baraamula, in Indian-held Kashmir. He said:

“I am pleased to visit this congress. It gives a real way out for the oppressed masses of Kashmir. The fundamentalists say that only Muslims are oppressed. That is not true. Hindus and others are also oppressed. The wounds of partition have not healed. Many groups use and abuse the Kashmir question for their own ends. But how can we solve the Kashmir problem? After coming here, I have hope in this congress. The colour of my flag is red. We need your support to build up a powerful revolutionary youth organisation across the border.”

Comrade S.N. Shoorida (leader of the Struggle organisation in Kashmir) replied to the debate: “Had we not had the international support behind us we would not have been able to do the work we did. On behalf of the Kashmiri comrades I want to thank all the comrades in Pakistan and India and the workers of the rest of the world who helped us. First of all, Marxism helped us analyse the situation. We believe in the right of self-determination of nations, but that does not mean that we should work for the separation of nations. Nationalism is too narrow-minded to provide a solution. The world economy has created the need for internationalism.”

He continued: “The independence of Kashmir is closely linked to the independence of the working classes in Pakistan and India in the fight against capitalist. Kashmir is bleeding. Hundreds of millions on the Subcontinent live in poverty. The ruling classes of India and Pakistan have used the Kashmir issue to suppress the workers’ movement for 60 years now. But now the Kashmiri revolutionary movement will come back with a vengeance. It can be the flame that lights the fires of revolution throughout the whole Subcontinent and beyond.”

After the ending of this session, commissions were held on Youth work, women’s work and trade union work. The congress continues its work tomorrow.