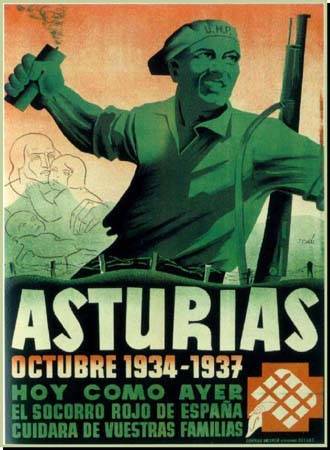 Today marks the 80th anniversary of the beginning of the Spanish Civil War. On 17 and 18 July, 1936, General Franco began his military uprising in Morocco, a prelude to the fascist uprising throughout Spain. The Popular Front government, elected in February, was suspended in mid-air. The landlords and capitalists went over to Franco. The workers, however, responded in a spontaneous fashion. Had the revolutionary upsurge been successful, it could have changed the whole course of history.

Despite their enormous heroism and courage, the workers’ leaders acted as a massive brake on the revolutionary movement. The Spanish Stalinists, under orders from Moscow, played an openly counter-revolutionary role. Together with the socialists, they joined the Republican government. The POUM and the anarchist leaders entered the bourgeois government in Catalonia, rather than offer a united front against Franco. The aim of this government was to destroy the workers’ committees, the foundations of a proletarian government. This tragic mistake allowed the Stalinists to isolate and crush the POUM, sealing the fate of the revolution.

The elements of workers’ power were eliminated. The military struggle of the Spanish Republic dragged on, but with the crushing of the Revolution, the outcome was inevitable. The resulting victory of General Franco prepared the way for WWII and a nightmare for the Spanish working class.

“Today, the Red Army having been captured and disarmed, the national forces have reached their final military objectives. The war is over. Signed: Generalissimo Franco, Burgos, 1st April, 1939. The Year of Victory.”

So reads the final communique of the Spanish Civil War. Two days earlier his troops goose-stepped into Madrid, to the cheering of the hysterical middle classes. The dark shadow of fascist reaction spread over Spain.

Pope Pius XII, the head of Mother Church, immediately communicated his blessing. “Lifting up our heart to the Lord, we rejoice with Your Excellency in the victory, so greatly desired, of Catholic Spain. We pray that your most beloved country, with peace attained, may take up again with new vigour the ancient Christian traditions which made her so great.”

Franco’s peace was to unleash a reign of terror more devastating and vengeful than the Holy Inquisition. Franco’s enemies, the broken workers of Spain, were on their knees. In the slums of Madrid the starving people lived on bones. For the masses, there was no bread, no meat, no fuel. The Republican army had run out of ammunition and the Government had ignominiously fled weeks before, like a dog. The people, trembling and fearful, awaited their fate at the vengeful hands of Franco. 200 military judges accompanied the Nationalist troops into Madrid.

To the north, bedraggled columns of exhausted and starving refugees fled over the Pyrenees to France. Some 500,000 people crossed the border. Anything was better than to wait passively for Franco’s hangmen. Those who remained were herded like cattle into bullrings in provincial towns to await their fate at the hands of the merciless military judges. The new authorities moved swiftly and against the remnants of the Red Menace. In each of the main cities more than 100 were executed every day. Many simply starved to death. Franco’s Minister of Justice recorded 192,000 executions between 1939 and 1945, mostly summery shootings by firing squad. Some hid away in holes and cellars for fear of death, hidden by their families, and not emerging until more than 35 years later, following the death of Franco in 1975.

The Franco dictatorship lasted a long time, until it became utterly exhausted. A new generation of workers resisted the old dictatorship and engaged in revolutionary struggles. The death of Franco in 1975 ushered in a revolutionary crisis throughout Spain. The Socialists and Communists became mass organisations. However, instead of using the revolutionary wave to do away with Spanish capitalism, the leaders of the mass organisations conspired with the old regime to guarantee a peaceful transition to “democracy”. This lost opportunity resulted in massive disillusionment and the consolidation of the old regime in a new democratic guise.

Today the old parties of Spain are in crisis. The decline of the Popular Party and the Socialist Party has been met with the rise of  the radical PODEMOS. Politics has polarised, epitomised by the return of the language of the 1930s. Even today, they are still digging up skeletons and shallow graves of those who perished resisting Franco.

Spain today is facing a new convulsive situation. The Spanish working class will enter major battles, as in the 1930s. It is therefore vital for the new generation to lean the lessons of the Spanish Revolution. The lessons of Spain will also be important lessons for European workers as a whole. To this end we enourage our readers to read or re-read the below articles on the Spanish Revolution which analyse the revolution and its demise, drawing the lessons for today.

The Lessons of Spain: The Last Warning (1937) - Leon Trotsky